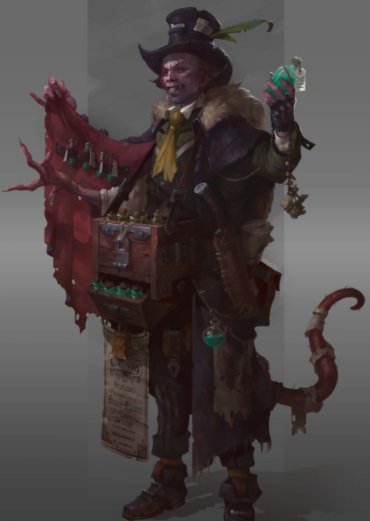 Negotiators master the art of oratory. Their focus is on people and on the influence and secrets they have. Persuasion is regarded as a high art and a well-reasoned, well-spoken argument often proves more powerful than objective truth. They wield a blend of logic and wordplay, winning over skeptics and detractors with logical arguments, and plucking at heartstrings to appeal to the emotions of entire audiences. Words are their weapons as often as knives or poison, and secrets and favors are some of your favorite treasures.

You can make a Negotiator quickly by following these suggestions. First, Charisma should be your highest ability score, followed by Intelligence. Second, choose either the Charlatan or Courtier background.

As a Negotiator you gain the following class features.

The Negotiator table shows how many spell slots you have to cast your spells of 1st level and higher. To cast one of these spells, you must expend a slot of the spell's level or higher. You regain all expended spell slots when you finish a long rest. For example, if you know the 1st-level spell Charm Person and have a 1st-level and a 2nd-level spell slot available, you can cast Charm Person using either slot.

You know four 1st-level spells of your choice from the Negotiator spell list.

The Spells Known column of the Negotiator table shows when you learn more Negotiator spells of your choice. Each of these spells must be of a level for which you have spell slots, as shown on the table. For instance, when you reach 3rd level in this class, you can learn one new spell of 1st or 2nd level.

Spell save DC = 8 + your proficiency bonus + your Charisma modifier

Your words are your spellcasting focus for the Negotiator spells. As such, any spells that have any somatic requirements can be fulfilled with lip movements.

Starting at 1st level, you are a master at saying the right thing at the right time. When you make a Persuasion or Deception check, you can treat a d20 roll of 9 or lower as a 10. You also learn two languages of your choice.

Also at 1st level you can spin words laced with magic that unsettle a creature and cause it to doubt itself. As a bonus action, you can choose one creature you can see within 60 feet of you and roll a d6. The creature must subtract the number rolled from the next saving throw it makes before the start of your next turn. You can do this the number of times equal to your Charisma modifier and must take a long rest to replenish it.

At 5th level, choose two of your skill proficiencies. Your proficiency bonus is doubled for any ability check you make that uses either of the chosen proficiencies.

At 11th level, you can choose another two skill proficiencies to gain this benefit.

At 6th level, you have gained the ability to make your speech intelligible to any creature. As an action, choose one or more creatures within 60 feet of you, up to a number equal to your Charisma modifier (minimum of one creature). The chosen creatures can magically understand you, regardless of the language you speak, for 1 hour. Once you use this feature, you can't use it again until you finish a long rest, unless you expend a spell slot to use it again.

Starting at 9th level, if you spend at least 1 minute observing or interacting with another creature outside combat, you can learn certain information about its capabilities compared to your own. The DM tells you if the creature is your equal, superior, or inferior in regard to two of the following characteristics of your choice:

At the DM's option, you might also realize you know a piece of the creature's history or one of its personality traits, if it has any.

Beginning at 13th level, you can sometimes cause another creature to suffer an attack meant for you. When you are targeted by an attack while a creature within 5 feet of you is granting you cover against that attack, you can use your reaction to have the attack target that creature instead of you.

At 17th level, your thoughts can't be read by telepathy or other means, unless you allow it. You can present false thoughts by making a Deception check contested by the mind reader's Insight check.

Additionally, no matter what you say, magic that would determine if you are telling the truth indicates you are being truthful if you so choose, and you can't be compelled to tell the truth by magic.

At 3rd level, you chose a playing field that your character would operate in. Choose between a con artist or politician, both detailed at the end of the class description. Your choice grants you features at 3rd level and again at 7th and 15th.

Some use their negotiating abilities to cheat and trick others, persuading to believe their lies and profit.

Starting at 3rd level, you double your proficiency for Stealth and Sleight of Hand.

At 7th level, you have advantage on Deception and Performance checks when trying to pass yourself off as a different person.

At 15th level, you can mimic the speech of another person or the sounds made by other creatures. You must have heard the person speaking, or heard the creature make the sound, for at least 1 minute. A successful Insight check contested by your Deception check allows a listener to determine that the effect is faked.

The powers of negotiation are debatable best suited for the inner workings of government.

Starting at 3rd level, you double your proficiency for Insight and Persuasion.

You learn three additional languages of your choice at 7th level.

At 15th level, you can ably create written ciphers. Others can't decipher a code you create unless you teach them, they succeed on an Intelligence check (DC equal to your Intelligence score + your proficiency bonus), or they use magic to decipher it.

You know all of the spells on the basic Negotiator spell list and additional spells based on your subclass.