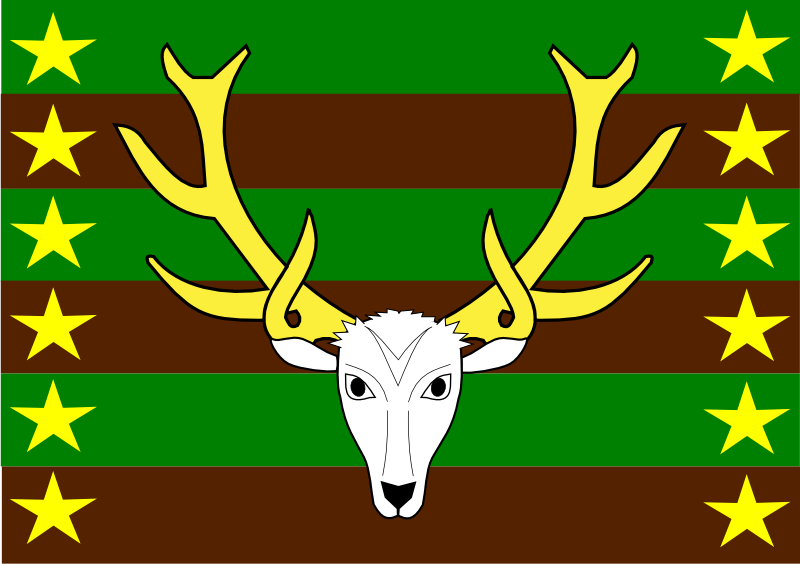 Flag of the Border League.

Fort Resolute is the capital of the Border League and her chief trading center. Fort Resolute contains the main chapter house of the Restorationsists. The fortress is massive, having walls sixty and seventy feet high. The fortress itself is surrounded by a city and a territory which are called called Fort Resolute. 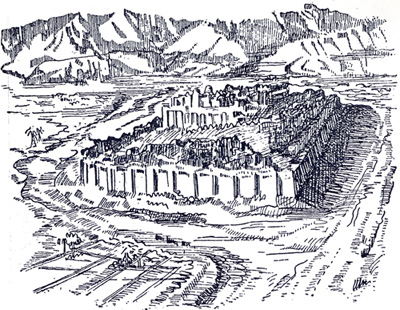 Fort Resolute was established by the forces of Good during the War of Good and Evil. This garrison lead the fight against both the Pyramid of Skulls and the blasphemous Cultists of Agony.

During the Thule Empire, the western border was heavily wild. Generations of settlers and soldiers settled there, striving to tame the vast wilderness. Many campaigns were needed to tame the savage people who lived there. Their great achievement was the Imperial Highway that ran from Charystos, along Hadea, and through Clydae to the furthest island of Ger Dagum.

When the Griffon Empire was established, its ruler took Fort Resolute as his capital. Over the years, the empire continuously added to this massive construct by using goblin and hobgoblin slave labor. The Empire continuously campaigned to expand its lands. Its people grew able, militant, and independent.

The capital was later moved to Fera Nea.

The Griffon Empire sought to remain neutral during the Wars of Law and Chaos. The end came when the Empire allied with Law, but its people allied with Chaos. From that, a long and bloody civil war ripped the empire apart. From that arose the new lands of the Border League, the Twelve Kingdoms, the Great Dwarven Union, and the Feral Nation.

Fort Resolute is now the capital of the Border League. The Far Plane Trading Company seeks Fort Resolute as their own possession. They have taken to assassinating important political figures.

The Imperial Highway has been beset by bandits and brigands.

The goblins are likely to rebel again.

Fort Resolute houses a gate of enormous size. Only three of the Grand Imperial Gates ever existed. The other two lie in Charystos and Rhakotis.

Fort Resolute itself is built on an enormous rock formation among gentle, verdant hills. To the east lies the rugged territory of the Twelve Kingdoms.

The chief crops of this region are corns (wheat, barley, etc). The hills produce many excellent vintages of grape.

Fort Resolute is governed by the Chamberlain. This inherited title traces back to the emperors, when the chamberlain administered this city for his emperor.

The people of the city vote for a general to administer all forces every two years.

All members of the Border League are required to provide troops to the city to guarantee her defense.

The city uses considerable numbers of goblin and goblinoid slaves. The city is always fearful of their insurrection, and so have enacted harsh laws against these beings.