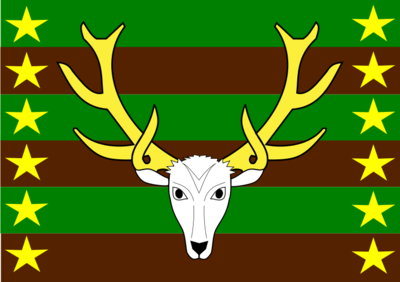 Flag of the Border League

A sponsor of the Border League is the Copper Dragon Malachar. This dragon helps protect the League, but his services are expensive, leaving the League somewhat cash poor.

The patron god of the Border League is Hart, Lord of Wild Creatures. 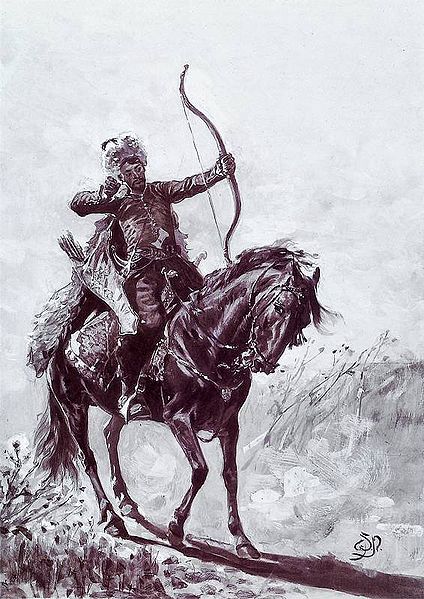 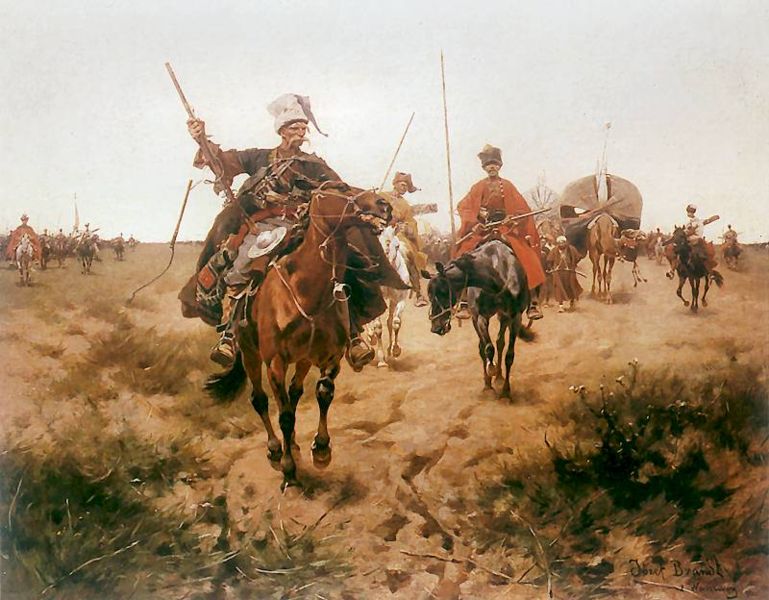 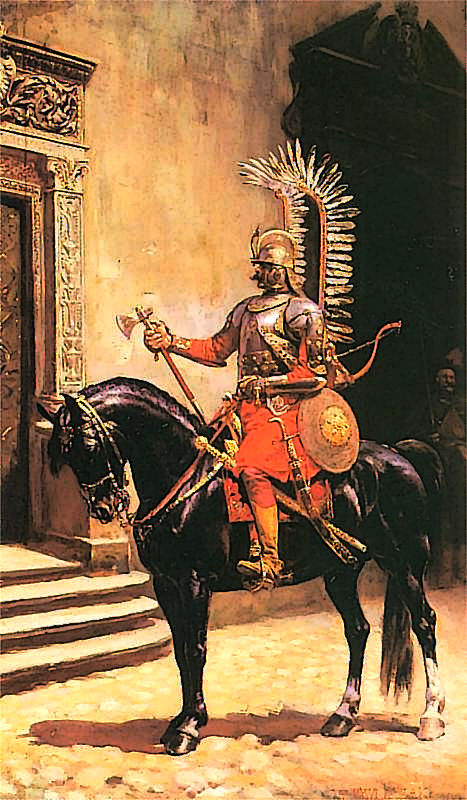 The Griffon Imperial Court followed the Axiomite cause, while the Imperial subject usually preferred the Transgressor cause. Over time, this erupted into civil unrest, then full civil war. When the Griffon Emperor was executed by the Captain of his own guard, powerful men vied for his remaining power. Governors seized the provinces that they administers and armies seized the provinces from the governors. One warlord who arose during this time was Ecklus, an archmage of strong power. He had served the Imperial family for several generations. To further his ambition, he hired goblin mercenaries to fight for him and to conquer the land of Maig Bab.

From his fortress in Maig Bab, Ecklus waged a campaign of conquest against his neighbors, defeating and enslaving them. His pride and his arrogance grew. At noon on high summer, he went too far. Standing on the roof of the forum, he declared himself a god, demanded that all his subjects worship him as a god, and then asserted that all his subjects were his personal slaves. For his goblin mercenaries, this statement went too far. Legend says that Samael appeared to a hobgoblin general and bade him to rise up in revolt. Knowing themselves blessed by a true god, the goblilns revolted, overwhelmed Ecklus, conquered Maig Bab, and formed their own country called the Feral Nation.

The other imperial provinces expected the goblins to collapse and fight among themselves. Instead of collapse, the goblins successfully quelled all resistance against them, solidified their hold on Maig Bab, then proceeded to conquer surrounding provinces. In an ill-thought response, the human lands allied together into the Griffon League, a large cluster of provinces adjacent to the Feral Nation. They placed their capital in the imperial capital of Ferra Nea. The Feral Wars ensued, with the Griffon League losing more land than it won. Along the border, the once populous lands emptied, with its peoples either becoming refugees, or becoming slaves of the Feral Nation.

Although many provinces fell, it was the breaching and sacking of Ferra Nea that shocked the world. Ferra Nea was widely considered among the greatest and most beautiful cities in all the world. The Griffon Empire moved its capital there during ancient times, pouring the riches of its vast empire into its construction. Her temples were richly endowed. Her defenses were among the finest ever devised. Her Imperial palace stood as a wonder of the world. To conquer her would take "an indominable army, a military genius, and a god." When Ferra Nea fell, the Feral Nation had all three advantages.

Having lost its capital, the Griffon League moved its capital to Fort Resolute, the ancient imperial capital. The surviving military commanders renamed themselves the "Border League" and rewrote their rules. They swept away the remnants of imperial tradition and started anew. To be in the Border League meant that you could hold your territory against incursion. If you could not hold your territory, then your neighbors had every right to invade you and place a competent commander in your place. Ability, not nobility, now stood as the sole criteria for rulership.

Reorganized and rededicated, the Border League stemmed its losses. It held the border fast, denying victories to the increasingly professional Feral Nation forces. It hired armies by promising lands to the veterans. This allowed them to bring people back to the territory, strengthen their militia defenses, and pay their soldiers despite their lack of gold.

Last year, the border was quiet. Each side raided across the border, but no significant military engagements took place. Most Lords believe that the Feral Nation will launch a retaliatory incursion into the Border league. The only question is where and when.

Broadford lies on and ancient road to Ferra Nea, once the capital of the Griffon Empire. A river flows through this valley from the Savage Seas to Ferra Nea, navigable the entire way by shallow bottom boats.

The rules of Broadford is the Baroness Forsythia, better known as the Missus. Her husband, the Baron, was recently killed in action against bandits.

To the west of Broadford is the Mallaig Badlands. To the east is Durness and the Witch of the Second Night. To the north lies the ruins of Knessex and the Feral Nation, and to the south is the dangerous fey court of Carmarthen.

Durness is ruled by the Louth, the Dutches of Durness, and the Witch of the Second Night. She has been steadily defeating her neighbors, building a power base to challenge Prince Kazimierz. Rumor has it that she routinely betrays her neighbors, allowing others to weaken them, and then conquering them with little resistance.

To her west is Broadford. 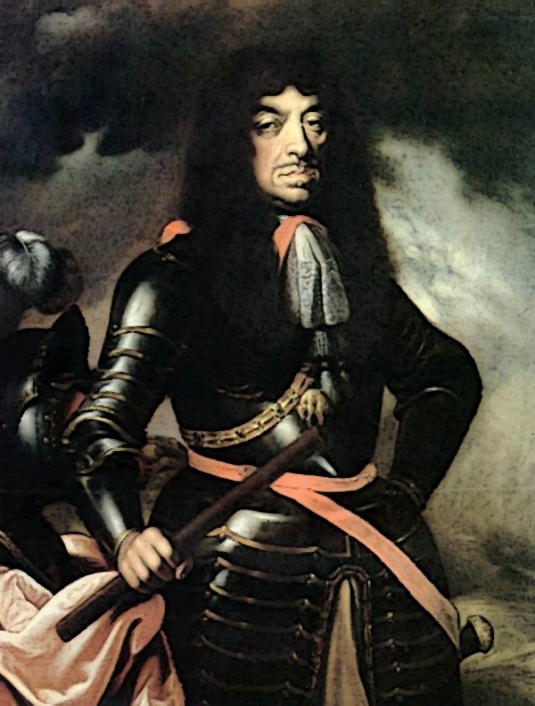 Fort Resolute is now the domain of Prince Jan Kazimierz. He is the richest and most powerful of all the nobles in the Border League. His domain is also the most stable. He is as calculating in court as he is on the battlefield. He is a skilled warrior, but it is popular knowledge that he has learned shadow magics from the fey courts and utters terrible curses upon his enemies.

To the east of Fort Resolute is Whittthorn.

These bandlands were the ancient home of the Hadean dwarves. Many dwarven ruins and delves lies scattered through this land. Today, it is mostly inhabited by bandits and dangerous beasts.

To the west is the empty land of Whitthorn, and to the east is Broadford.

Whittthorn is an empty land. Most people who lived there have fled, locked themselves behind walls, or been enslaved or killed.

To the west is Fort Resolute, and to the east is the Mallaig Badlands.

The people of this land are rough and free. They think little of their lords, and less of themselves. The very wild and primal nature of this land breaks apart any but the strongest organization. These are the men who rejected the Axiomite inclinations of their rulers, choosing instead rebellion and long suffering war.

Horses are popular in these lands. The Border League more trained cavalrymen than any other area of Endhaven.

The warriors of this land are proud of their ornamentation, freely wearing their wealth and decorating their armor to show off their wealth.

Even though a more individualistic land, the men do share bonds. Men prefer sharing the shield designs of their localities rather than creating new designs for each individual noble lineage.

Knights of the Border League are among the best troops at countering goblins. Their gear reflects the change in warfare in these lands. Skirmishes and speed are often more important than massed force and armor. Frequent raids across the borders, even in times of peace, is common.

Some troops are trained to use special weapons called firearms. These are bought from the Far Plane Trading Company. These weapons are highly effective, but their purchase has place the Border League deep in debt. 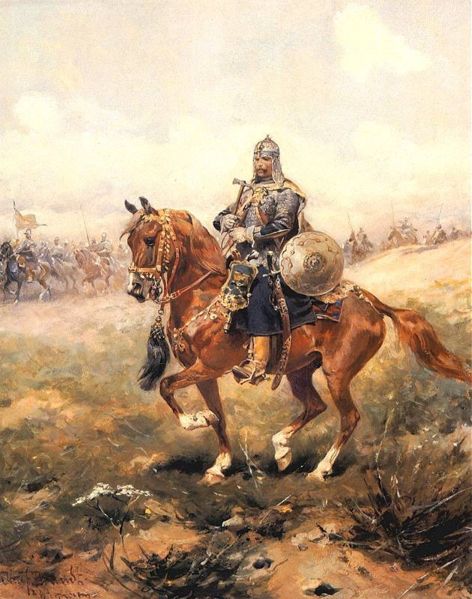 Savage Sea pirates have been raiding the League and enslaving its people.

The Feral Nation desires the resources of the League for itself.

The League fights within itself.