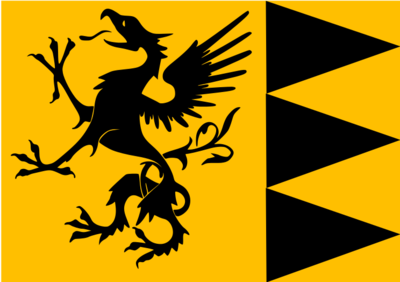 Flag of the Griffon Empire.

The Griffon Empire is a historical empire that split into many smaller countries, such as the Border League, the Feral Nation, and the Twelve Kingdoms.

The Griffon Empire is one of three empires formed from the Thule Empire.

The Griffon empire, which many thought the weakest, proved the most elusive. Ever and again, the two larger empires attempted to corner the Griffon empire, always to find that they had nothing. The Griffon Empire expanded into the Wild, bringing in fierce and free-willed peoples to her fold. Griffon Cavalry were the finest light cavalry in all the worlds, able to strike deep and fast wherever they wanted. Her speed and reliance on mundane flesh and spirit proved amazingly effective against empires of magic. Armies that marched against her bogged down, as every town and city fought against all invaders. The great wizards could seize territory, but they could not hold it. Wherever the great wizards went, the Griffon forces went elsewhere.

These three empires fought this conflict in sporadic and complicated wars.

The Griffon Empire no longer exists.