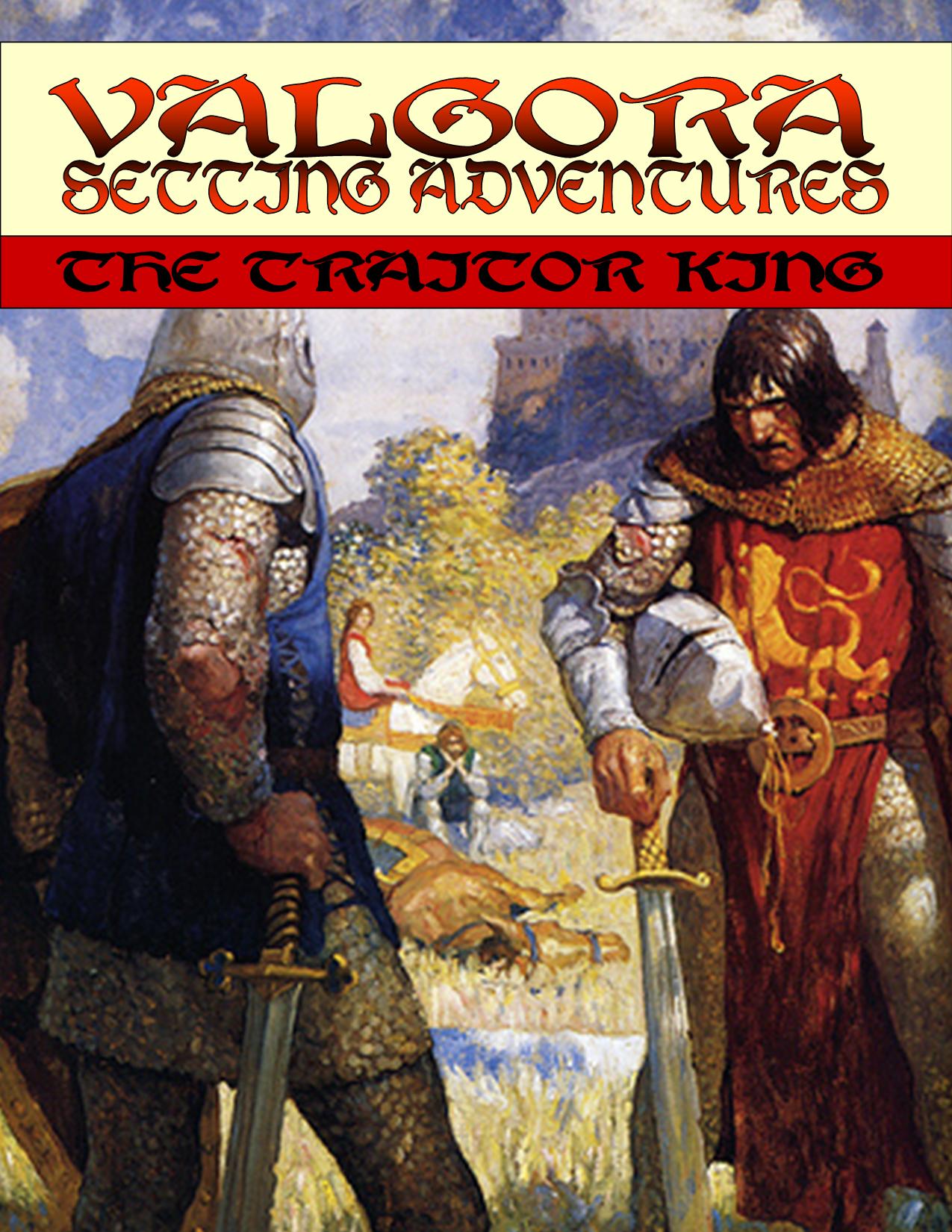 This page lists hooks and ideas for encounters that a Dungeon Master can use to help move his game along. No single encounter mentions any particular fight, just a general idea and direction. This way the Dungeon Master is still free to mix and match however he wishes. The ideas can be used in order to form a small storyline. A general understanding of the countries and political leaders of the Valgorian world will prove helpful.

This entire page can be used consecutively from levels 1 to 20 to form the campaign adventure known as The Traitor King.

Your characters spend a fun evening at the Bucket of Blood in Talara's dock district. After hellos and a few drinks, a party member realizes he/she has been robbed. Who is that halfling sneaking out the back? What does the tattoo on his forearm mean? Meet the International Thieves Guild.

Weary of staying any longer at a Bucket of Blood Tavern after learning about its status as the front and base for the International Thieves Guild, the party decides to instead stay at the more wholesome Tall Tales Tavern. The owners is having some troubles with the same thieves, and needs some help.

The Tall Tales barkeep advices the party to lay low after their scuffle with the International Thieve's Guild for a week or so, so they don't get targeted by any higher ranking members. The group is given access to his cabin in the Hesjing Highlands in thanks of their help. The woods are never empty however.

The time spent in the highlands allowed the party to view the distant Mt. Hurthi, home of the legendary line of radiant dragons. It would appear as if other travelers are heading towards the great mountain. What could be up?

Investigative work (and some physical altercations) lead the party further up Mt. Hurthi to meet the radiant dragon and find out why so many seedy individuals are forming a base camp in the highlands below.

The dragon, Velor, tells the party that some political musings are stirring tides of international war, and that he is as of yet unaware who the militants below swear allegance to. He asks you to seek out an old friend of his in Malsvir.

The destination is the journey. The party hits foreign land for the first time and sees the strange surrondings and locals. The perilous road is always filled with bandits and other individuals.

Road Bandits meet their doom at your party's hand, but they bear clothing and materials with the same emblem as the mysterious army forming back in Talara. Someone in town must know about this.

Velor's old friend is just that - old. Is he too old to be making sense? The emblem, he says, is an old House of Caex emblem. What does this mean?

The Prince has returned, but not alone. A king meets his death by the hands of his own blood, and civil war erupts. Why are low level royal guards carrying correspondence bearing the same emblem of Caex. What is this third symbol? The local magi claims that it is Ghikvan.

Civil Disobedience never tasted so good. The good citizens of Uriktar will not stand for such injustice. Urban warfare and terrorism begins to usurp the Traitor King.

Other Malsvir legions arrive in masses. Two armies from each country, one supporting each side. The city may very well be razed to the ground.

The only way to Ghikva to get to the bottom of the story is through the heart of the battle. Why go alone? Lead an army to victory, and you may gain some allies.

Traveling through the vast continent brings tidings of all sorts of the horrible happenings in Ghikva Proper. A few skirmishes with forces bearing Royal Ghikvan Shields brings the party to the capital city after weeks of travel.

Two Traitor Kings are worse than one. A great king lies freshly in his grave, also at the hands of his son. Yet by the time the party has arrived, the citizens have driven this bastard out. After a few nights in jail due to the town's distrust, the party earns status. They learn that the new King Drubai has made base in the Frell Mountains, and the citizen militia is marching to war at dawn.

The death of Drubai is only a small blow, as the party learns that Prince (now King) Thraun of Uriktar had planned to off him after it was set and done anyways. But they learn that Thraun answers to one man - Martiver Caex, leader of their own home town. A new world order led by one greedy man?

The Journey Home. New allies bound around the legendary adventurers who slayed one of the traitor princes. The legion sets sail towards Talara. But it is not the same, and the journey is met with resistance by Royal Guards along the way.

Martiver Caex was born to rule Talara, but he dreams bigger than his father. A brief exchange of words confirms the fears of the party, but before any physical altercation may occur the party realizes they are only speaking with a mirror image. News of a great battle beginning at Mt. Hurthi lead the party through town, but not without being trailed by the best of the Royal Guard.

Ghikvan, Malsvir, and Talaran armies fight - each other. Every country has a divided force, some working with the usurpers, some against. Velor is facing great dragons in the sky, while members of every race fight for the very world they know. The party spots arcane explosions from far above: Martiver Caex is here. The battle to get to the battle.

On this day, Valgora stood still. Will the prodigal Caex turn the peaceful world into his thrall, or will the most unlikeliest of adventurers forge a path to victory?