The Moons of Saturn is a Doom campaign run by me (User:Marasmusine) for the fine folks at D&D Wiki.

I will be accepting 1 to 4 players. Make a marine. For background, pick soldier, urchin, sailor (replace vehicles (water) with vehicles (aerospace), criminal, or any homebrew background that will fit in a sci-fi setting.

When you post your actions, start with your character's name in bold. Don't use a header and don't sign the post (I trust you not to pose as someone else's character :)

The game is underway, but by all means people can still join in, it's trivial to write people in.

DM. As you dash through the darkness, the habitat court begins to glow with a diffuse red light from above, accompanied by a queesy throbbing sound. You hear sound like a pig dying, and a demon bounds out of the hydroponics lobby, onto a big crate. You can make out little scurrying things, too, cat-sized, but it's not clear what they are... In the nearest elevator to you, stuck half-way-up, an ex-security guard starts pounding his shoulder against the glass, screaming obscenities, eyes red.

Williams is hidden, against a big shipping crate. The bar and grill is off the north side of the map (I'll refresh it if you get that far). Everyone make initiative checks! 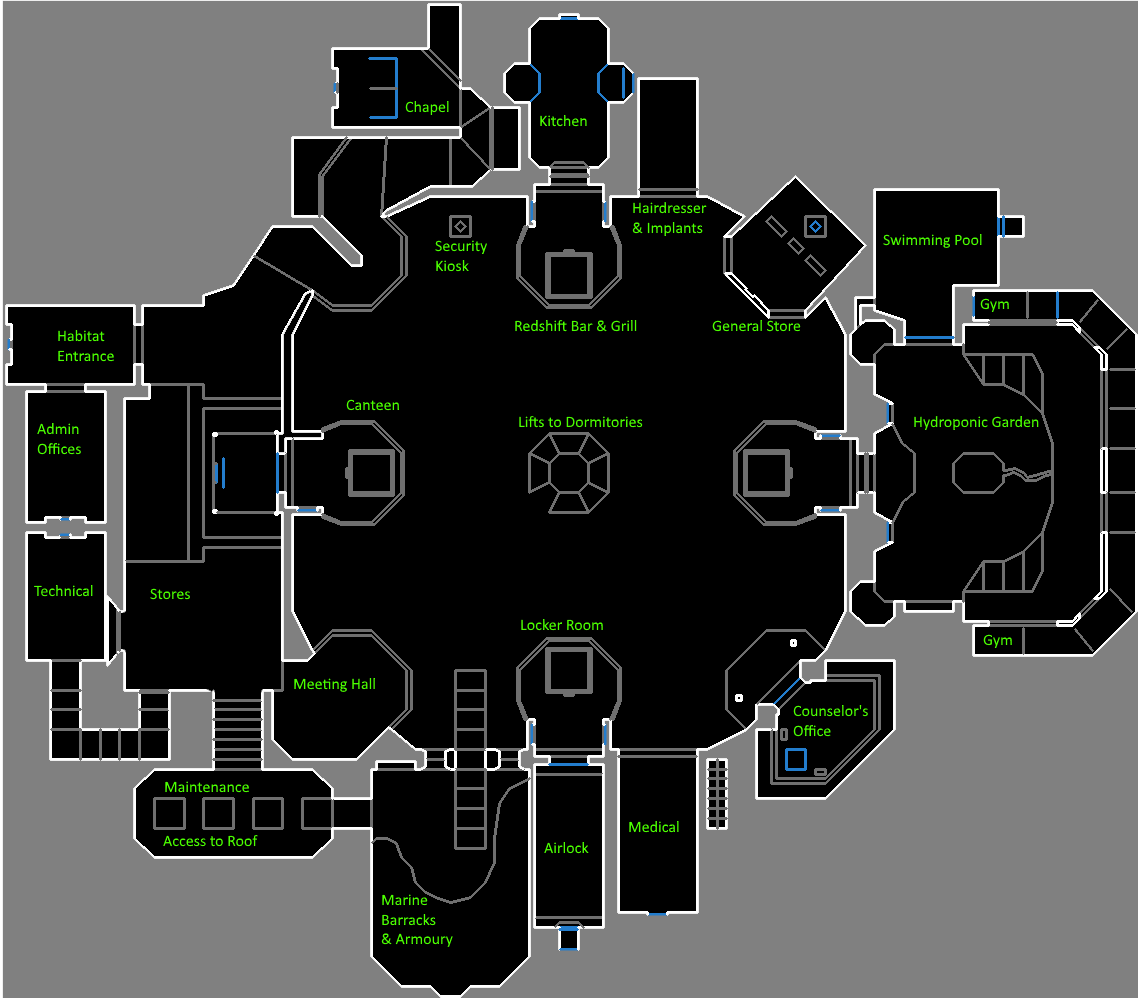 (As you can see I've been busy getting better quality map tiles and tokens. I couldn't find a diagonal door, but there is the entrance to the counceller's office in the diagonal wall to the south-east.)

DM (Williams is purple, Flynn is blue, Ordos is yellow, Stafford is black. Williams is pressed up against the crate and hidden.) The critters scurry across the floor with a wet padding sound, disappearing behind a crate.

Flynn. Flynn moves to find cover from the former security agent, then makes an attack using his shotgun. d20 11 + 5 = 16 Roll

(Flynn also uses a bonus action to use "Point Fire!" against the former security agent)

DM. Flynn moves up and takes cover behind a display board (showing dim and shuddering images). Although the guard has some cover from the elevator, the shot smashes the glass and punches into him. (6+8+3 = 17 damage, -5 absorbed by the glass = 12 damage). The weird device on Flynn's shotgun makes a buzzing sound, then stops.

Williams gets a clear shot at the demon and it takes a full blast of shot. It screeches, but as before, the wound immediately partially heals (9 damage).

(Stafford up next. I will mark the guard in a red diamond to denote the point fire bonus).

DM. Stafford's shot only just smacks the guard in the shoulder (6 piercing damage), Flynn's order making all the difference.

The guard responds with a shotgun blast, but it strikes the display board by Flynn, showing him with bits of plastic.

The demon leaps and bounds onto the crate outside the councillor's office and lobs a firebolt at Stafford, but it screeches past and impacts somewhere in the distance.

During this exchange, the red light from above has been intensify along with the throbbing sound. Cracks appear in the court roof, glowing a fiery orange. Athena has been announcing: "This is a general announcement. The main comms array is now synchronized with the stations on Iapetus, Rhea, Dione and Tethys and is locked into its secondary phase. Communications will be available for use in 88 hours and 12 minutes. During this time there may be some localized thermal emissions. I apologize for the inconvenience."

Great globs of what appear to be lava emerge from the cracks above (marked on the map with red squares).

The critters swarm up to stafford. They look like badly mangled rats. They seem to be wet. The thing in the lead looks like two conjoined rats. It snarls and snaps at Stafford's leg but can't penetrate the armor.

(Flynn's point fire expires, but I left the mark on in case you are issuing it again)

Flynn. Flynn moves away from the superheated material, makes another attack against the former security agent with his shotgun then uses "Point Fire!" again. d20 19 + 5 = 24 Roll

DM. (Okay, I'm going to be generous and say Flynn reloaded his shotgun prior to this battle. Next time I'll make an Intelligence check for the character. My apologies if you did say you reloaded it and I missed it. Can we also agree on if collectively you want me to update your character sheet's ammunition or if you're going to do it!)

It's a solid hit that throws the guard to the back of the elevator. He slides down, lifeless.

DM The chainsaw judders through the leathery body with what feels like a lethal strike, but again the demon proves quiet resilient (7 damage).

Great globs of lava drop from the ceiling cracks, sloshing onto the lobby floor. Something small and flying emerges from the molten rock, what can only be described as flaming skulls. "Look out!" Ordos cries. "Two of 'em, there and there! It's one thing after a-freaking-other!"

One skull hovering around the hydroponic lobby shrieks and zips through the air towards Flynn (12+3=15) but its bite does not penetrate his armor. The other skull weaves through the crates before shrieking towards Williams (1+3=4), but just snaps at air.

Williams. I drink down another can of F-Max, and attempt to cut open the flaming skull with my chainsaw. Not seeing the skull through the flames well, I miss. 1d20, 4 + 5 = 9.

(Is that still with the pistol?)

Flynn. Flynn moves away from the flaming creature and closer to the rest of the group, uses his action to reload his shotgun, then uses a bonus action to use "Point Fire!" on the creature he moved away from.

The flaming skulls drift as though weightless, teeth chattering, dripping flecks of flame. One follows Flynn, (9+3=12) but can't find an opening. The other snaps at Williams (18+3), digging deep into his shoulder with burning teeth. (11 piercing damage, 8 fire damage)

DM The skull snaps (5+3=8) but misses Flynn as he jumps over to the critter and boots it in the side (4 bludgeoning damage). A weird sensation in Flynn's hand as... yes... his shotgun seems to squirm? The device attached to the scope mount judders.

Flynn's flaming skull floats over to Ordos (4+3=7) but is kept at bay. The other skull suddenly screeches rapidly towards Stafford, over William's shoulder (no opportunity attack). (14+4=18) Fire and teeth cut into Stafford's shoulder (10 piercing damage, 14 fire damage), the near-explosive force knocking him down.

Ordos panics. "We're SCREWED! RUN!". He rolls his grenade between the skull and the critter, and makes a run for it. The flaming skull tears into his flank as he goes (18+3=21; 8 piercing damage, 8 fire damage), and he falls to the tiles in a smoking heap. The grenade explodes (22 piercing damage), shredding the critter into pulp, and cracking the skull somewhat.

(Sitrep: Ordos and stafford are down and must take death saving throws on their turn. There's one flaming skull (the one that took down Stafford) and one critter left. Will update map.)

Williams. I run around the burning mound of lava, shouting "Monowi, it's great to see a friendly face! I have no idea where the lava is coming from, or why these skulls are on fire, and who they used to belong to, but Ordos and Stafford are down! I don't know why the ceiling is erupting, and how we will be able to use a communications channel, but I think that if we kill these skulls then we will be safe for long enough to get out of here! There is enough going on that we may leave unnoticed!" On my way over to Stafford I pick up my shotgun from the floor. As soon as I get to Stafford, I kneel down and poke him with a stimpack. It restores 6 hitpoints (4,2).

Stafford. Stafford gets up. "Thanks, Williams. We need to get Ordos. Do you have another stimpack?" Stafford fires off a shot at the flaming skull with his pistol. Roll: 13 + 4 = 17

Flynn. Flynn shoots the flying skull with his shotgun, then uses "Point Fire!" on the skull if his shot doesn't take it down, otherwise, he uses it on the last critter. d20 20 + 5 = 25 Roll

DM. (Shot also at disadvantage due to the critter adjacent to Flynn. Second roll is 3 + 5 =8. Point fire is on the flaming skull.) When Flynn points the shotgun directly at the flaming skull, a green light on the weird device (angled to face the wielder) lights up. However, the grotesque rat-thing leaps at his leg and foils the shot.

More magma threatens to gloop down from above (marked as red squares on the map). 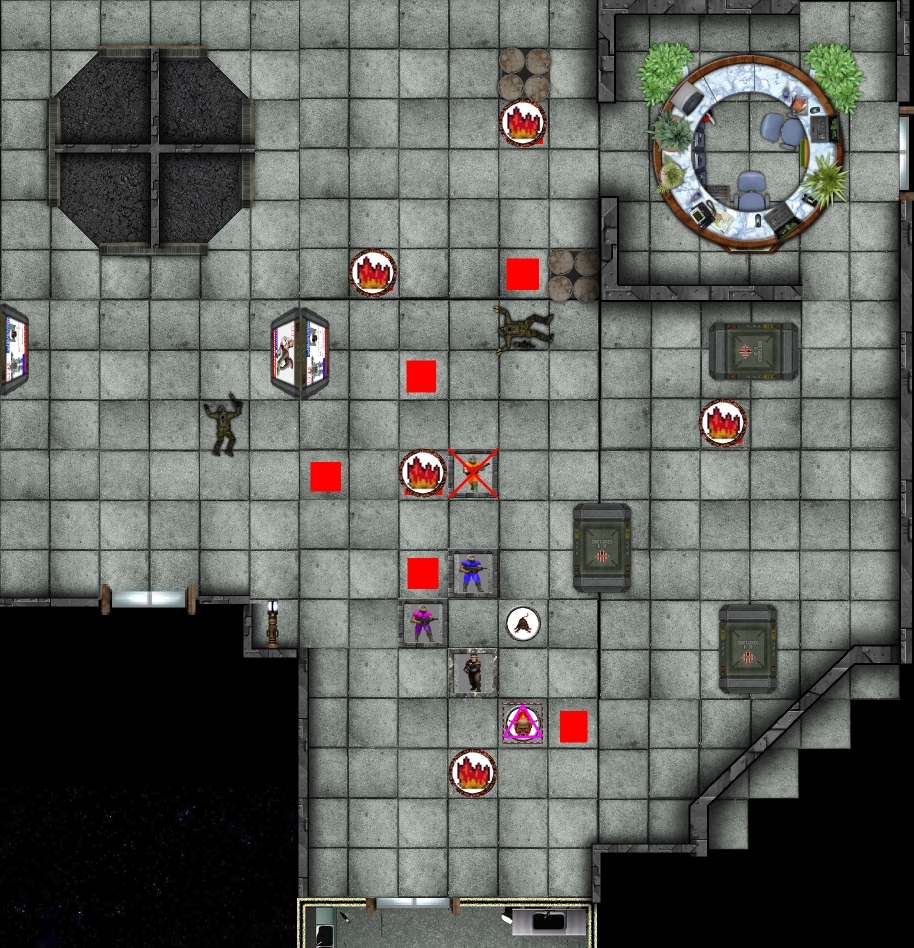 Flynn. Flynn tries to help Ordos with a Medicine check, while also getting a medikit ready, just in case. d20 16 + 1 = 17 Roll, Roll for proficiency: 8 Roll

DM. Ordos is already getting back up to his feet, so doesn't need stabilizing or anything (and it takes 1 minute to use a medikit). Would you prefer to do something else?

Stafford. Stafford swaps to his shotgun and fires at the fiery skull. Before he does so, he moves around it (while staying within range, so no opportunity attack) so none of the stray pellets will hit his allies. Roll: 17 + 4 = 21

DM. (Stafford is the figure in black, so he's okay where he is, in fact if he moves around either the critter will get an OA, or you'll be standing next to the lava when it drops.)

Stafford's shotgun blast hits the skull fully (14 ÷ 2 = 7 piercing damage), spinning it around but it recovers with a snarl.

Monowi shoots her shotgun from long range at the critter (critical hit! 3 +3+3 = 9 piercing damage). The rat thing crumples in a sticky pile.

The gloops of lava fall from the ceiling. I would like Flynn and Williams to make DC 10 Dexterity saving throws.

(The skull rolled a 1...) The flaming skull is engulfed by the lava and for the moment is obscured, although you have the feeling that may not be particularly harmed. But for now you have an opportunity to move on. Half the habitat is on fire, everything is drenched in a pulsing a flaming orange glow, distant thudding echoes around. Lava is beginning to form large pools, eroding into the plascrete floor. Ordos isn't waiting for orders, and runs north towards Monowi.

Williams. I begin to run, jumping around the falling lava and making my way across the debris to Monowi. I shout "Monowi, can you open the shutter and tell Lou'an that we need to leave together right away?"

DM. Monowi gives a thumbs up and ducks back in to the bar.

(Here's your Christmas present: You get 260 XP each, which I believe is enough to level up? I'll let Flynn and Stafford leave some closing roleplay, and we'll recommence in the new year.)

Stafford. Stafford runs over to Williams and Monowi. "Is everyone okay?"

(Per comment below, I will change William's XP to be the same as Flynn. Is it calculated correctly when I give myself as much xp as him?)

(Stafford got some bonus XP for hacking doors, so I think so. Also, you reach 3rd level when you get a total of 900 XP)