Are you okay with this page being moved to DnD Discussion, as a “Wiki Gaming:“ page, so that I can change the news item to go to the DnD Discussions list page? --Green Dragon (talk) 05:03, 20 February 2017 (MST)

I linked to a character on my talk page, Nathan Flynn, a Human Marine of the Unknown background. SirSprinkles (talk) 12:37, 21 February 2017 (MST)

Okay, thanks, we'll get started! Disregard the faith section your character (or replace it with a real-world faith). Marasmusine (talk) 13:41, 21 February 2017 (MST)

I'd prefer a compact form, with all the mechanical information at the top on one screen, so I don't have to scroll up and down. I'll have a crack at it later today. Marasmusine (talk) 01:16, 22 February 2017 (MST)

I'm more disappointed with how I organized proficiencies. It looks ugly, with big headers leading only a few point-form words. It was also universally misunderstood, because it is counterintuitive. However, I agree with you. Putting fluff forward is primarily a quirk of character sheets I design, and is very unusual in our hobby. In essence, it is my narrative-oriented bias showing. Something organized more like a WotC character sheet would probably be much more readily utilized by more gamers. --Kydo (talk) 06:57, 22 February 2017 (MST)
I'm simply going to use the monster statblock: Terry Williams (Doom Supplement) Marasmusine (talk) 11:45, 22 February 2017 (MST)

You guys can start playing by the way. You don't need to write paragraphs of story. As a general rule, one line of dialogue, and one or two actions. Marasmusine (talk) 01:23, 22 February 2017 (MST)

Okay, please note on the main page I have linked to updated character sheets, please use these as I have corrected some values. I changed languages to actual languages you might know (instead of Abyssal or whatever). Marasmusine (talk) 09:37, 25 February 2017 (MST)

Am I always supposed to post first since I am in position 1? I did not know that those two drawings on the map are pillars for the thermal exchange coils. Haha, I thought that they were chairs and that was a large touch board where we could see all the oxygen usage reports, flow types and methods, etc. So, if Flynn wants to take the lead here that's totally fine of course. I'm still figuring out what Williams wants to do right now, but I will post it soon. --Green Dragon (talk) 14:01, 2 March 2017 (MST)

I'm really sorry about the delay with the last post, I should have been checking this every day. Marasmusine (talk) 17:56, 7 April 2017 (UTC)

No worries. Your posts have been good. It took me some time to choose a Strength check, and now I'm still figuring out what Bravo is willing to try, and what Williams is going to do now. Maybe Flynn already knows. --Green Dragon (talk) 16:07, 8 April 2017 (UTC)

If either of you need a recap of what is around you, or more information about something in the environment, just go ahead and ask. Marasmusine (talk) 16:55, 8 April 2017 (UTC)

Sorry for taking so long to post. I am still not sure if Williams is making any sense, since I am certain there is a better way to approach this dilemma than how I have done it now. Sometimes it takes me longer to choose what to do with all the choices right now, and with Easter it took me a long time to respond. --Green Dragon (talk) 17:41, 18 April 2017 (UTC)

Williams is fine too since he has used all his stim packs. You should start the round since you have the highest initiative. --Green Dragon (talk) 08:32, 27 April 2017 (UTC)

Sorry for the delay, I want to punch GIMP in the throat, it's so stupid. I got a nice map that needs tweaking. Rectangle select drags the image around instead. The nice cross hatching fill I had before has disappeared. The eraser makes a white mark no matter what colour I have selected. Nothing fricking works. If you can recommend another image program that supports layers, let me know. Marasmusine (talk) 20:02, 9 May 2017 (UTC)

I know Adobe Photoshop since it's the market standard. I used GIMP a while ago, but I also ran into these types of problems with it. For open source image editing programs, I recall that Inkscape handled layers pretty well, and had hatch functions. If you are trying to make a grid dungeon then Adobe Illustrator has a pretty neat grid filling method. Otherwise, Sketchup and Inkscape can probably give the same results without too much extra work. Either GIMP or Inkscape has one of the best document history functions, where you should be able to revert the document back to the working version. --Green Dragon (talk) 22:09, 9 May 2017 (UTC)

Okay, I've decided to use MapTools :) I think it's the easiest way for me to push counters around a grid, and I can export an image. Please forgive me, I just need one more day to prepare some tokens, but that will set me up for all future Doom encounters. Marasmusine (talk) 20:30, 10 May 2017 (UTC)

Good to hear it worked out. No worries from me, for me its more important that you are doing something you want to do then feeling pressured. Please. no pressure! --Green Dragon (talk) 20:49, 10 May 2017 (UTC) 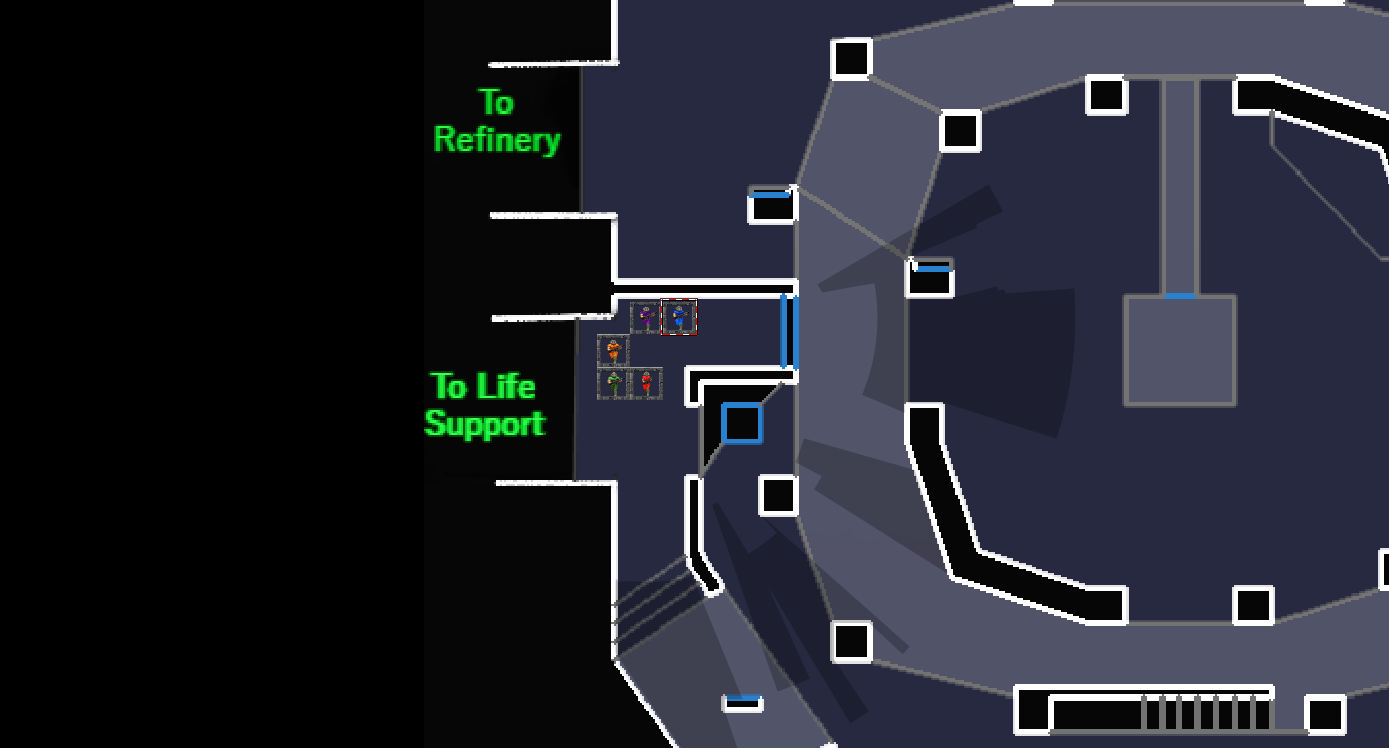 Williams is in purple, Flynn in blue, Hallstat in green, Ordos in orange, Monowi in red. I think they are OK for identifying where you are, let me know if it needs to be clearer. Marasmusine (talk) 20:01, 11 May 2017 (UTC)

Hello there, I was wondering if I would be able to join this campaign? If so, would I be starting at 2nd level? Of course, you'll need to see my character first, but would it hypothetically be plausible for me to join? Also, is there a template digital character sheet I would be able to use?

Ok, this sounds brilliant! When do you usually play? (I'll start making my character in about 20 minutes) I won't look too much at the events so far so it's easier not to metagame.

Just a note. It looks like sometimes you'll want to fire a different weapon, so I'll have you drop one so you can draw the other and still have all your actions (such as in the last turn where Flynn had been using his pistol but switched to shotgun). After a battle, I will assume that you recover anything that you dropped. Marasmusine (talk) 21:44, 23 May 2017 (UTC)

Okay, thanks for telling me.

Hi can I join this adventure please-Banshee70

Hello, yes, please make a Marine (5e Class). It would be preferable if you could be Hallstat, Ordos or Monowi. I haven't set their personalities or physical features in stone (except genders: male, male, female respecfully). You can use the normal creature statblock (see the other's character sheets for examples) Marasmusine (talk) 08:35, 9 June 2017 (UTC)

Banshee70 - Hi I'm just doing my characters back story. In this Universe does Earth have colony worlds that could be at various states of technological development?

No, there are only outposts spread out throughout our own solar system.
Also, you can start at 2nd level, and while you can pick any archetype you like, it might be interesting if you picked the Argent Agent. Marasmusine (talk) 09:04, 10 June 2017 (UTC)

I had some trouble logging on last night. I'll check again tonight. If the other players have not submitted their turn, I will set up the characters using my best judgement. Marasmusine (talk) 11:56, 11 June 2017 (UTC)

My character is ready,here it is.

Is there any way I can change combat so that it's easier for you? Are the maps okay? Would you prefer group initiative? Marasmusine (talk) 14:35, 6 July 2017 (MDT)