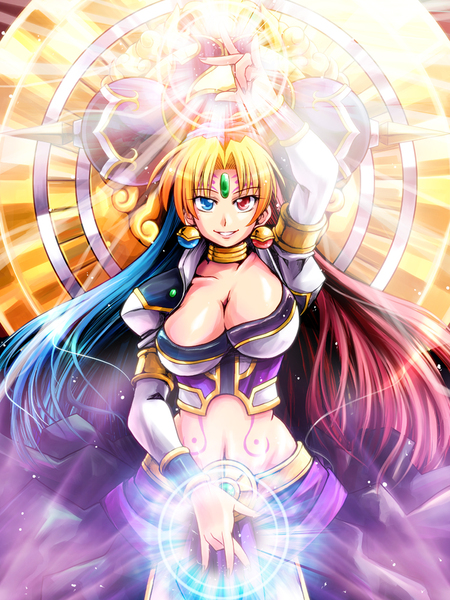 Mana, the Goddess of Knowledge and Progenitor of all Arcane Magicks. She embodies the pursuit of intellect and natural harmony.

Unlike the teachings that are commonly taught among the Pantheon's followers, Fate once had an equal prior to the banishment of the Aesir. A deity who rivaled her in power and aligned with her politically, one who chose to step out of the Deific Sphere and into the material plane of Tirr simply out of a desire for a natural balance between the two developing factions, and not for any dislike or principle of the administering of the Oath. This deity, who takes the shape of a woman donned in regalia befitting her status, and who enjoys the sight of many hues of color, is the Goddess of Knowledge, Mana.

Those among the mortal races of Tirr, these days, have fragmented knowledge of the happenings of the Deific Sphere prior to the introduction of the Aesir, and many Aesir have been the sole source of scholarly endeavors by mortals to understand what truly happened before time as they know it began. They have a friend, however, the whimsical deity, Mana, who in seeing that the gods could provide mortals with divine magic and blessings, decided that this was not enough, and created the art of weaving the arcane threads that she, herself, created, into the mystical arts that are practiced by Sorcerers and Wizards. Yes, in that respect, she is single-handedly responsible for the introduction of these two classes into the world of Tirr.

Despite being revered as a Goddess of Arcane Magic, many scholars, and those who are truly faithful, understand her ideal to be Knowledge, and therefore, she is the Goddess of Scholars, who approaches all things with interest and a discerning gaze, ever faithful to her unbiased position in the world, which simply is defending, or sometimes quite literally creating, the natural harmony of the world around her.

Along Tirros, who fashioned the planes themselves, and Fate, who has bound all history and circumstance, Mana is part of the trio of deities who contributed the most significant efforts towards the creation of the Material Sphere, and therefore Tirr, itself. She contributed the mystical threads of primal, elemental force that bind all of the planes together, and permeate unseen in them in order to become the illusion known as reality. This was later expanded upon in order to create arcane magic, which focuses on the manipulation of these threads in order to perform great effects.

She appears to mortals in her regalia, her hair tri-colored and adorned with regal effects, as a lithe woman with heterochromia. Her personality is one of discerning visage mixed with an off-puttingly easygoing nature. She often treats those mortals she meets as if they were young children, and has a tendency to refer to herself as if she were a grandmother, heartily laughing whenever others call her such, flustered as they might be.

Followers of Mana strive to uphold three major principles: The pursuit of Knowledge, Balance, and Neutrality. It is held in esteem by those who worship the deity that these three principles are the most important aspects of their Goddess, and therefore they endeavor to reproduce them in their daily lives. Indeed, Mana even commends these principles, but when she does appear to her followers, she often reminds them that she does not necessarily endorse Stoicism, as she finds the nature of life and existence to be more enjoyable when one can afford to laugh or cry; She simply happens to value the objective lens with which she views the world through.

It is not uncommon, however, for some sects to exist outside of the devoted, who espouse similar views as the goddess, or for sects who worship Mana to have different interpretations of what she embodies, or even in some extreme example, what she says. Many folk have adopted the ways of the Goddess without actually serving or worshiping her, though Mana doesn't begrudge this. The reason for this is because Mana is the only Aesir who appears to always be active, constantly being given ideals by the studious mortals that surround her. Her ideals are also served by those who dabble in the arcane arts, which consists of an ever-present field of study, filled to the brim with Wizards and Elementalists who constantly seek to uncover more and more about their arts.

The Mageknight Academy and Conservatoire of Mages, otherwise known commonly as the Mage's Guild, both have Mana as their patron deity and saint, giving her prominent respect in two of the most respected institutions of arcane magic. She also particularly known for giving out the book of infinite spells to mages she finds worthy, which earns her quite a few followers, aiming to receive such a blessing.

Mana, surprisingly for an Aesir, has no central temple or even a standard allotment of temples, even though she has millions of followers. This is often attributed to how ingrained arcane magic and the pursuit of knowledge has become for mortals' daily lives. Still, she maintains quite a following of faithful clergy, and some temples do exist.

The most notable temple in Tirr is the Temple of Mana, located in Tirasus, capital of the Tirasus region. It is commonly associated with the Mageknight Academy which assists the clergy in maintaining it, and is also located nearby.

Small Shrines to Mana were removed in Goldengate following the decree that all Arcane Magic be banned, but this led to a much greater backlash among the remaining populace, even after Godsreach seceded from the nation. This led to the shrines being reinstated, though worship at them is often considered heretical and looked down upon.

Mana has relationships with a multitude of other deities, especially now that she has released arcane magic into the world of Tirr. She commonly associates with Fate, who to this day, respects and considers her counterparts' ideals on the same grounds as her own, almost to a degree of inferiority, something she has never shown to any other deity. Hel has relations with her, as well, as Mana is constantly hounding Hel to allow those using her arcane magic to also barter for the dead, to Hel's dismay.

Bahamut, in particular, enjoys quite a bit of attention from Mana, whom she views as integral in maintaining the balance of Tirr, after Tiamat and Bahamut became mortal foes. She treats him as a force of good, to whom, sometimes, she will divulge information unto in order to keep his evil counterpart in check. Vok and Undine are often visited by her, but more often than not for simple errands or favors in the course of her research. Alcyone regards her with deep respect, but seems to have disdain for the Goddess, seeing her has more of a disturbance than as a fellow, but then, this is normal, given her isolationist tendencies.