The world of Tirr is a wide expanse of varying planes of existence and layers of reality with its origins being traced back to the war of the divines, which culminated in the creation of a unique planar prison called the Material Sphere. The construct was intended to seal the disjoined Varglokirr, and to prevent him from receiving any of the power of the light in his inert state.

The prevailing legends are that three gods created the planar sphere, which became the foundation for the world: Tirros, who fashioned the golden, cosmic apparatus which contains the planes; Fate, who provided the canvas of time and space; and Mana, who wove the strings of primal, elemental forces to bind the planes, time and space, and the apparatus together. Lunar and his eternal rivals, Helios Majora and Helios Minoris, are charged with guarding the sphere at different intervals, and thus provide the light of the moon and two suns, respectively.

All mortal life exists within the Material Sphere, and many obstacles and barriers prevent passage into the realm of the divine, often called the Deific Sphere or the Divine Sea. The two worlds are distinctly far apart, even if closely related.

The Material Sphere contains most planes of existence, and has many distinctly aligned planes. Almost each and every plane incorporates progression of time, and all mortal races live on the various planes contained by the sphere. Planar travel within the sphere is usually possible by manipulating the latent primal threads that Mana used to bind the planes together, in a process which has otherwise become known as arcane magic; This type of travel, however, is often restricted to, at most, the outer planes, as it makes use of the two astral planes, which do not extend to the fundamental planes.

Progressing through the fundamental planes is difficult, as the positive and negative energy planes are often deadly to planar travelers, and beyond them, the Plane of Souls is inhabited by Hel and her devoted champions, to further keep wandering souls from the world of the divine. 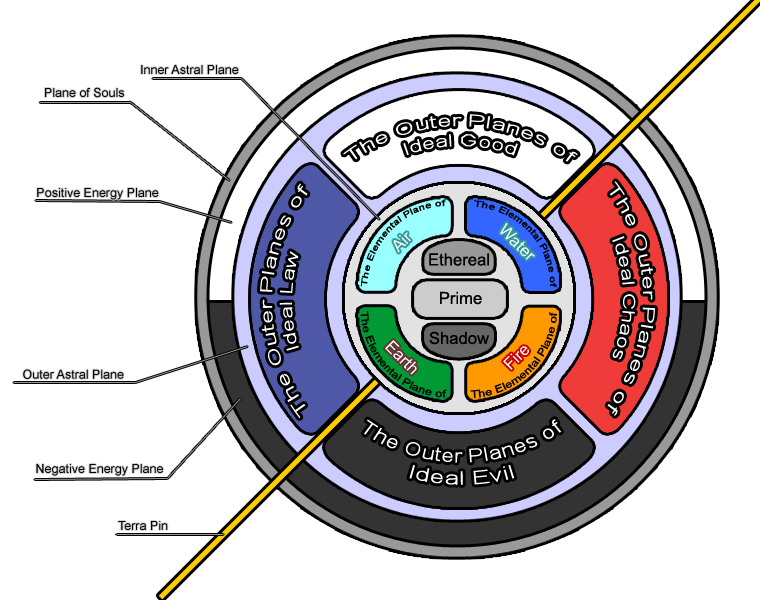 A simple chart detailing the cosmology of the Material Sphere.

At the core of the Material Sphere lies the Central Planes, enveloped by the Inner Astral Plane.

Often called the Prime plane, the Material Plane is the center-most plane within the Material Sphere, housing a vast array of mortal races and environments which are the results of its proximity to its planar neighbors. Typically, the most varied of mortal individuals live on this plane, and therefore, it tends to generate a great many legends and tales. This plane shares the same time and space as the Ethereal and Shadow planes, as they are both coterminous and coexistent.

A large amount of the population of Tirr is fond of calling this ghostly, desolate plane "the Ghost Plane". There are almost no structures or impediments of any kind, and its distinct features make traveling through it for extended periods of time rather unnerving. Individuals on the Ethereal Plane are able to observe, but not typically interact with, the material plane. This relationship is not reciprocated, however, as individuals on the former plane are invisible, inaudible, and incorporeal unless the observer is aided.

A world of white light and deepest darkness, the Shadow Plane exists within every shadow in the material plane, although shadows do not normally allow individuals to pass through them, conventionally. This plane has many inhabitants, and often times the suddenly shifting shadow on a wall is more than what it appears to be.

Planes dominated by the four great elements, Air, Fire, Water and Earth, surround the material plane and other central planes. Their influence is what gives shape to the prime world, with the constant contest between rivers and mountains, firestorms and tempests resulting in the rather temperate world known today.

Also called the Astral Sea, it is transitional plane that connects all of the Central Planes. It is sometimes called a sea because of the way the two respective planes work in relation to each other. The inner sea is a calm, tranquil space, unaffected by the planes which it contains, by far and by large. As such, it is a wondrous place where time has no meaning and is largely safe to traverse.

The outer sea, however, much like a much deeper ocean, can be somewhat turbulent. Great ripples of time and space can affect planar travel in strange ways, sometimes distorting attempts to move through the outer sea effectively. Any individual attempting to travel to one of the outer planes by magical means must succeed a caster level check with a DC of 20. If they fail, the spell goes awry and terrible effects may happen. Make a d% roll, and find the result on the following table:

The outer planes are host to more idyllic planes than that of the Central Planes. Whether they be the Seven Heavens of Mount Celestia or the Infinite Layers of the Abyss, or even the Nine Hells of Baator, all outer planes tend to be dominated by one axiomatic ideal, often grouped together based on their leanings towards particular ideals over others. Some souls are lucky to be released from the Plane of Souls after their appointed time into the good-aligned planes, while others might find there way into the infernal depths.

It is worth noting that most of these planes are coterminous with each other in some places, even to the point of partially overlapping in certain demi-planes, such as in the Seven Heavens of Mount Celestia, which straddles the planes of ideal law and ideal good. This is not reliable, however, as the overlap between them is sometimes temporary or cyclic. Most often travel from one to another must be accomplished by utilizing the outer astral plane.

Sub-planes or Demi-planes that exist in the outer planes are often illustrated as free-floating demi-planes that rest in the greater idyllic planes. Some drift between the coterminous points of each plane.

The Planes of Ideal Good[edit]

This plane contains sub-planes such as Elysium, Bytopia, and The Beastlands. These planes, along with those who share aspects of them, are typically home to good-aligned creatures such as Angels. Some view these plains as a type of idyllic paradise.

The Planes of Ideal Law[edit]

This plane contains sub-planes such as Mechanus, Arcadia, and Acheron. These planes, along with those who share aspects of them, are typically home to lawful-aligned creatures. Most inhabitants are comprised of scholars and constructs, but some variation exists.

The Planes of Ideal Chaos[edit]

This plane contains sub-planes such as Limbo, Ysgard, and Pandemonium. These planes, along with those who share aspects of them, are typically home to chaotic-aligned creatures. The land is often non-static, changing shape and texture as it pleases. Some refer to these planes as the Asylum.

The Planes of Ideal Evil[edit]

This plane contains sub-planes such as Hades, Gehenna, and Carceri. These planes, along with those who share aspects of them, are typically home to evil-aligned creatures. Demons and Devils do battle with each other and intruders upon these planes, and some even host dark and evil gods, such as Tiamat.

The Fundamental Planes serve two purposes in the Material Sphere. First, they are planes that contain powerful raw energies of life, and therefore maintain the many worlds of Tirr. The Second, is to be a powerful set of obstacles to keep wayward travelers from intruding into the realm of the gods.

Although it is called the Deific Sphere by many, mostly referencing the Material Sphere, there is no evidence that the existence beyond the sphere is also contained within a planar construct. Often referred to by alternate names, such as the Divine Sea, or the Realm of the Gods, this plane is infinite and brimming with powerful divine energies.

There are many demi-planes that exist in this plane, such as the famous Common Ground, where all deities of the Pantheon gather together to govern and debate. Most demi-planes are largely managed by their creators, who often use them to their own devices.