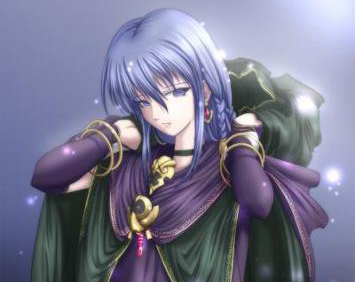 All mortals curse her name, and yet revel in her magnificence in the same breath. It is she, who guides heroes to their highest moments, and who leads Kings to their downfall. Fate, the goddess of time and destiny, weaves the fabric of time and reality under the watchful eye of the rest of the pantheon. While her place is greater than most of the other gods of the Pantheon, sitting upon the High Throne and even considered to be akin to an overdeity at times, she holds only so much more divine power, with most of her respect coming from her position in the divine court, though her power is prestigious, in its own right. Despite this, She often finds the actions taken within the Pantheon as the most neutral and balanced, and therefore heeds them.

Her ideal is that of Fate, perhaps unsurprisingly, but she is often also considered a goddess of Time, Destiny, Legends, Logic, Reality and Neutrality, or sometimes erroneously depicted as being chiefly a deity of these aspects. While it is true that she largely endorses many of these things or actively works within these aspects to a significant degree, she only reserves one particular ideal above others, like all other deities of Tirr.

While she does create the very form of reality itself, it does not mean that each and every action is predetermined. Fate merely builds the space and time out of the defining choices of those on the threshold of greatness and epic tales. Her fabric is only ever a few months ahead of inhabitants of the planes, so the future is always in a constant state of change, depending on what the Gods, and the mortals below, happen to influence. The past, however, is always in stone, stagnant and unchanging... or, it usually is. Only the gods know of the few times Fate has simply thrown the fabric aside, to start anew.

Fate is among the most resented of the pantheon's deities by the followers of the Aesir, as they view her, along with Vanguard, to be the major perpetrators of the Oath. Whatever the case, her support and implementation of the oath is a matter of fact, and it, along with her rather cold and indifferent attitude towards the struggles of the Aesir, have made relations and reconciliation between followers of Fate and Aesirean followers, and in some cases deities, difficult. That said, Fate views one of the Aesir, Mana, with a high amount of respect and regard, often to a point of doubt and inferiority, and trait she shows to no other entity in existence. This is because prior to the banishment of the Aesir, Mana was one of the few deities who could rival Fate's own power, and she also represents the ideal of Balance, something that Fate also admires and favors.

Followers of Fate are, unsurprisingly, highly fatalistic. They fancy themselves more observers of a world already defined, or heralds of the oncoming days. They are often specialists in divination school of magic, due to their goddess' influence. It's not the rare case that an agent of fate ends up guiding heroes along in their journeys, knowing or not, and it is believed that this is a practice often perpetrated by the goddess, herself.

Clerics of Fate are unable and unwilling to take Lawful, Chaotic, Good, or Evil spells or actions, merely acting as observers. Sometimes, however, they also may act as safeguards to the ordained future, traveling with a party in order to ensure their objective is met. They are usually callous and cold, unflinching at even the greatest of outcomes, and their voices are often distant and emotionless. By no means is this caused by troubled pasts or the like, but simply because they are resigned to the fate that they've come into.

This means, inherently, that Followers of Fate can accompany both Good and Evil parties with no moral consequence, so long as they consider it a fateful necessity. Determinism flows through every actions and whim in the mind of the most devout follower, as well as a desire to understand the true intentions of their deity.

Clergy of Fate are located far and wide. They generally do not come together in large congregations, as it is not Fate's whim to have followers in the first place, so much as agents that carry out and safeguard the future. They generally dress in gray attire, mostly robes and other neutral and simple clothing, and once more, specialize in divination. Clerics who serve Fate typically are nomadic seers, often traveling from place to place in order to gain greater understanding of the world, and to perhaps increase the chances that they divine the cosmic intentions of their deity.

Temples to Fate are unheard of. Most of those that do exist typically are associated with Pantheistic organizations that dedicate services and worship to all deities of the Pantheon. Others are fakes, as most followers of Fate concern themselves less with congregation and worship and more so to the pursuit of divining her will and intention in the fabric of the the Material Sphere.

Some shrines are located to her, often housing an oracle, or simply being a place of communion for her servants. Such places are few, however, and the latter are more secretive than the former, since it would threaten to alter the course of the world if such a large gathering of seers and servants of the most powerful seat of the Pantheon were public.

Fate holds the top seat of the Pantheon of Tirr, effectively being the major source of mediation between the other gods and goddesses of the Deific Sphere. Her policies usually only are made effective if one or more of the other parties, such as Balthazar and other extreme deities, come close to confusing their personal or extreme goals with the state of the planes. Her power on the Pantheon is that of true neutrality and balance, of course. She may also sometimes rely on Hel to act unofficially in her stead, as the two maintain a trusting relationship.

Having held the seat of power for so long, effectively before time even could begin to exist, all deities in the universe of Tirr generally pay Fate with some respect, even if they may directly oppose her.

Outside of the Pantheon, Fate is highly distrusted among most of the Aesir, besides Bahamut, Mana, and Undine. Of these three, she holds the highest rapport with Mana, and respects the Goddess of Balance greatly, often looking to her when she must consider the weight her decisions bring. Bahamut does not approve of Fate, largely because his ideal of Magnanimity is something that Fate can never achieve, as her nature is one of indifference and determinism. Undine does not dislike Fate, but rather this is because her own ideal is Serenity, and she does not usually dislike anyone or anything strongly.