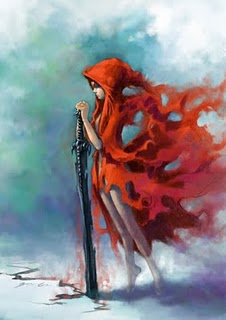 The Goddess of Death, itself, Hel stands watch over the Plane of Souls, and guides them to slumber.

In the world of Tirr, one of the natural effects of having been born in the Material Sphere is the lack of Light does not allow living beings the ability to evolve as quickly as they would outside of it, and therefore prevents the generation of divine power that would otherwise cause them to become deities or otherwise divine beings. Because of this, living creatures within the cosmic boundaries of this world are essentially mortal, above all else and with few exceptions, so therefore, they all must eventually die. Of course, however, the wondrous weave of life and ideals does not make such a fragile creature that it is simply torn apart on death. Instead, the existence of the creature persists in an immaterial form; The same is true for sapient species, though with one special caveat: Sapient species are still capable of attracting and producing their own ideals, and thus, can still think and exist, although they are limited in function without a living body to inhabit.

Because of this, Hel, who embodies the ideal of Death, resides within the very edges of reality in the Material Sphere, in a plane known as the Plane of Souls, where she guides the remaining spirits of the departed into a prolonged slumber, known as the Great Sleep. Once an individual is set into the slumber, they can no longer be resurrected, as the divine force of Hel's influence prevents any magic except that which directly propositions the Goddess, herself, from delivering the soul of the individual back to its body. This is done so that the entity can be prepared for a new life, as well as to implement a form of queue in which the souls are born anew, with most of its memories suppressed in order to prevent conflict or disorder when they are reincarnated in later lives. In large part, Hel is true to her impartial but fair nature, and will reward notably good souls with reincarnation in the good-aligned Outer Planes, whereas those who are notably evil will invariably reincarnate in the evil-aligned Outer Planes. Those who are not notable in any manner are generally reincarnated in the material plane.

While the Goddess is known for her just nature, she is also extremely strict and to-the-letter about her duties, often turning down many other deities who attempt to barter with her for the soul of a mortal who has already been applied to the Great Sleep, as it is called. She also tends to be rather notably discouraging when it comes to individuals who attempt to repeatedly escape death via resurrection, or altogether by achieving immortality in some way, such as liches. She often will contract the services of the Inevitables, who hail from lawful outer planes, especially those of the Marut, in order to have those who have caught her attention brought before her and prevented from resurrecting or living further.

When she appears before others, she often takes the form of humanoid female, wearing a long, red tattered cloak and often carrying a large obsidian Scythe. She often is noted to levitate slightly off the surface of the ground, and typically rests her hands on her scythe, speaking only when necessary, and usually with great authority.

Followers of Hel and her philosophy understand a natural order to the inevitable cycle of life and death. They seek not to hasten nor slow the great wheel of their lives, and as such, Lichs and other creatures that attempt to embark outside the cycle on her dire enemies. Those who worship Hel find that she has a rather cold attitude towards them, owing to her rather stern, focused nature. Because of this, her followers are often of the priestly, resigned and fatalistic sort, always ready to comfort those who mourn losses, but also to see souls off to the other planes, and firmly discourage those would attempt to go against the order and attempt to resurrect the deceased.

Hel isn't exactly forthcoming with other aspects of her opinions, and they might not exist. Given Hel and most other deities pre-dipositions to serving their ideals, specially, she primarily concerns herself with her duties towards the souls of the deceased and little else. That said, she does provide one special benefit to those who serve her well, and that is that they eventually join her in her eternal care-taking of the deceased, becoming one of her legion of pallbearers who oversee the vastness of the Plane of Souls alongside her, which is considered the greatest reward for those who follow her.

They are forbidden from seeking to escape their mortality, and in fact, often welcome their mortality as a part of their lives. They are restricted from taking any actions that would alter the circles of life and death, including Resurrection or similar spells, as well as Animate Dead spells. Hel does not provide these spells to her clergy or any paladins in her service.

Clergy of Hel are often found in within company of those of Fate, though more-so set aside from other Clerics. Hel rarely takes Paladins from the mortal races of the material plane, instead favoring the Marut to perform tasks for her, though the occasional legend will rear its head about the Death Knight, every so often, and some with historical credence to back them up. Typically, though, divine practitioners' beliefs include the persecution of all who attempt to escape the thread of mortality that binds all within the material sphere together, while providing rites and funeral services for those who pass on to embark in the Great Sleep, as well as comfort and reassure those who are left behind. They often are found in the employ of cities as gravediggers, priests, and other death-appropriate services. They are usually well-kempt, and often joyous about such situations, finding that their subjects commendation into Hel's embrace is reason enough to uphold the ceremony.

Temples to Hel are usually found in the busier parts of town, often the equivalent of mortuaries and funeral processions. These building are always clad in black banners, with silver trim, the emblem of the Crescent Moon upon them. One greater temple exists in Goldengate, along with the other deities of the Pantheons' individual temples, as well, given the high status of Pantheon worship, there.

Hel is seat to one of the Lesser Thrones of the Pantheon of Tirr. As such, she wields some influence in the affairs of the Deific Sphere and all of it's contents, as well as a major role in the mortality of their subjects. Fate often lends her a voice when the Major Thrones come to voting, since their views are so closely aligned. She is often approached by various deities of the Pantheon, such as Balthazar and Mephistopheles, in order to barter the release of souls, largely in need of furthering specific goals.

Mephistopheles, in particular, earns her ire rather regularly, as he often attempts to intercept or otherwise detain souls of the deceased who have previously bargained with him, which she believes is usurping the natural order. While he often barters with these souls later, or reforges them into cursed artifacts, a great many are often won back from his hands, and sent on to the Great Sleep as she sees proper.

Macha is another one of her antagonists, mostly because she prefers Corruption to the death of any individual, and often will attempt to completely destroy the mind of one she takes to, and in the process, completely keep the creature from death, as is their mortal right. Because of this, a number of her sentinels have fought the Corrupt Goddess for possession of souls that she has captured.