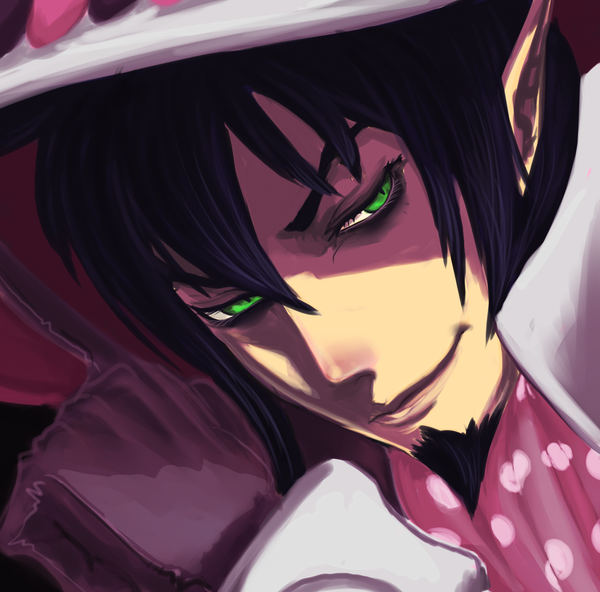 Mephistopheles, the Infernal Broker of Souls. Everything is for sale, even you.

Every culture has tales of mortals making deals with some strange figure, promising them anything they wished for, in exchange for their soul. Mephistopheles is that figure, the original deal-making devil. His constant intervention in the Material Sphere earns him a dislike from other Gods in the Pantheon of Tirr, but due to his assistance in the War of the Deific Sphere, his seat is reserved, despite his constant violations. He also helps to control and sooth Serberus when he's on the rampage, earning a little more respect, if not like.

A creature of many words, and even more deeds, Mephistopheles is often associated with legends of greed and desire, often ending in poetic justice for the wanting party. Even so, he is a powerful and respected deity among the mortal peoples of Tirr, although despised by many, as the modern concept of 'Contract' comes from his own legends and acts, legally binding a person to their word, under penalty if it is taken back. He tends to be most revered by scoundrels who thrive on the letter of the law, or who skulk in the shadows, such as Rogues and Assassins, but, as being one of the holders of a Major Throne so often affords, he is well-known enough on the planes to followed by just about anyone who is akin to the pact or the shadows.

The way of subtlety is, after all, an art, in itself.

Mephistopheles inspires his followers to work under the guise of cooperation, but to always come out on top. Guilds of Thieves, Rogues, and Assassins refer to him as their patron deity, employing his ideals and methods in their work. Backstabbing, both as a surprise attack and a treacherous motion, are encouraged by this deity, as well as making one-sided and self-serving deals or promises. Threats and Intimidation are also always appreciated more than actual violence, itself, which is viewed as unrefined by practitioners of Mephistopheles' arts.

In terms of actual dogma, most creatures who revere the deity do so out of self-interest, and therefore the common creed between them all is that of the creed of thieves. A commonly spoken phrase among the followers of Mephistopheles' ideals, albeit just as commonly attributed incorrectly, is "Nothing is Sacred; Everything is permitted". Living by these words, even those who follow the same creed are not safe among others like themselves. If one can gain from them, they are to be a victim. This dogma tends to breed paranoia and all manner of shady characters, although it is worth noting that most faithful are above that of being mere brigands, and instead style themselves as charismatic rogues, well-spoken highwaymen, and wise-cracking charlatans.

Clergy of Mephistopheles are almost always Assassins. Whether this means that they are simply a disguised order of assassins and rogues, or are actually clerics skilled in the arts of killing is irrelevant, as both could possibly be true, and likely are. Their kind always gathers in secret, in small numbers. Communication breaks down by hierarchical standards, with one grand-master and five masters, who each receive instructions from the grand-master, passing the information down their own lines. Members of the orders wear dark clothing, trimmed with red, and are required to carry a dagger at all times.

There are no temples to Mephistopheles. Sometimes, the members of orders devoted to him may meet in the poorer sections of town, where guards are less likely to patrol, or in small shacks unlikely to attract attention. The only indication of such a meeting is a small red ribbon nailed at the top right of the door-frame. Common legend has it that this is a sign of a hidden guild of low-lifes, assassins and rogues alike mingle and conspire to steal and murder for coin; Contracts are exchanged between parties, often from outside nobles, and often under guise of anonymity. The means of contacting, or gaining access to such an organization requires a rather deft hand and a quick wit, however...

Mephistopheles holds a major seat on the Pantheon of Tirr, and constantly abuses the power such a seat brings, though always to the maximum he can without becoming too penalized. He constantly upsets the "good" gods and goddesses, but still manages to earn his keep by providing a balance to them, Serberus, and actually bringing up well-thought out points when things get heated. His collected demeanor gains him respect, despite his dislike.

While Vault does not particularly care for or mind his reasons, Mephistopheles often manipulates the language of laws that are recorded within the former's pages, as do his followers, and so the two can often be closely aligned, but the relationship is not mutual. While it may not seem notable, he does maintain quite a harem of demi-goddesses, owing to his honeyed words and sense; a matter than wins glances from Era, but also offends Mara.

The trickster is largely regarded indifferently by the Aesir as a whole, but most of the active and known stand against him, such as Bahamut and Isis.