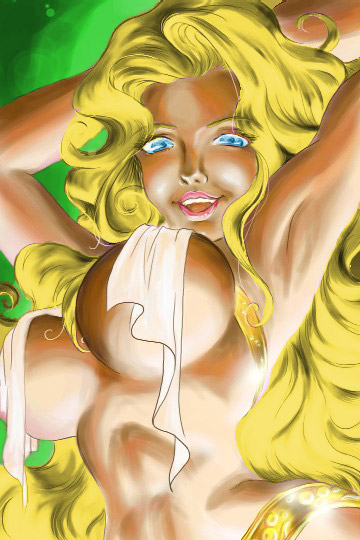 Era, Goddess of Love and Lust; She who weaves the bonds between lovers and fills there hearts with passion.

Representing the aspects of Love and Lust, and the passion that fills both concepts, Era is the Goddess of Love and rules from one of the Pantheon's many lesser thrones. She is widely worshiped by many cultures across the many planes of Tirr, and is commonly invoked, along with the Great Mother and Mara, as one of the trinity of goddesses who govern over love. She commonly assumes an avatar of great beauty, nude, but not naked, as her visage is clothed in the garment of feminine sensuality. Her appearance is a common subject in the works of many great artists.

While they are often associated by mortals, the three goddesses of love do not always see eye-to-eye, as they represent very different sides of love: The Great Mother espouses complete and unconditional love, universally, while Mara represents the love of family and country. Further still, Era represents a more sensual side of love, which can sometimes cause disagreements to appear between the three.

Followers of Era believe that nurturing and supporting love is, above all else, a divine calling. Much like their deity, however, they tend to divide their pursuits between the few concepts that she, herself, represents. While some may be wandering minstrels who sing songs of their goddess and of those legendary couples, whether happy or tragic, others might be ministers who officiate ceremonies to bless those who join together in the bonds of matrimony. Even more, still, will serve as the proprietors of such establishments as brothels, as the touch of the opposite gender is just as much a concept of Era as the other, aforementioned callings are. For those in Tirr, Lust and Love are separate concepts, but both are governed by the goddess, Era.

As a secondary ideal, those who take to the ideals of Era have a keen interest in keeping up their appearances, as their deity is also a Goddess of Beauty. While they do not, as a whole, strive for impeccable and impossible standards, beauty is still considered in high regard and appeals to the follower of Era's ideals.

Clerics who serve the ideals of Era are restricted from taking spells or performing actions that would harm or impede the course of genuine love and romance, and are encouraged to support or promote such things. As such, any spell that has a Mind-Affecting component is forbidden when its application would constitute such harm or impediment. In exchange, Clerics and other divine spellcasters who draw their spell pools from Era are considered to have a +4 sacred bonus to all Charisma related checks in relation to upholding these ideals.

The traditional temple of Era, like most deities of the Pantheon, is not a common construct, although some do exist, primarily in the Silverfell region, in the holy city of Goldengate.

That said, many establishments still consider Era to be their patron, and the range of such establishments is wide, indeed. Brothels, Chapels, and many such institutions have been considered to be temples to the Goddess of their ideals.

Era is supported and maintains relations with quite a few deities, being the flirtatious and sensual deity that she is. While she maintains a veritable harem of partners, of many races and sexes, she rarely consorts with other deities of similar status or higher, at least in the same fashion as she does her followers, perhaps due to the difference in ideals and how those deities of the Pantheon interpret ideals.

She is respected by and enjoys the support of the other two goddesses of the trinity, the Great Mother and Mara, and largely endeavors to support them and receives the same care, in return. Every so often, the three can come to odds about slight differences in their own ideals of love, however.

Unsurprisingly, Jubila is one of Era's closest allies, outside of the other goddesses, as the two tend to share many followers, given the propensity of music and song, as well as artistry and creativity, to arise from the same passion that Era instills in mortals and deities alike. Bycore also enjoys the company of Era, his whimsical nature as well as his love of freedom allowing the two to develop kinship.

Balthazar and Serberus, in a rare sort of agreement, do not usually support or approve of Era's ideal. Balthazar sees the type of ideal as a form of temptation, and a distraction from what is truly righteous, while Era represents a separate type of antithesis to his ideals, much like the Great Mother. Mephistopheles endures a wavy relationship with Era, as he is interested in the deity and her ideal, as passion is one of many tools of his own, but eschews the other ideals that she embodies.