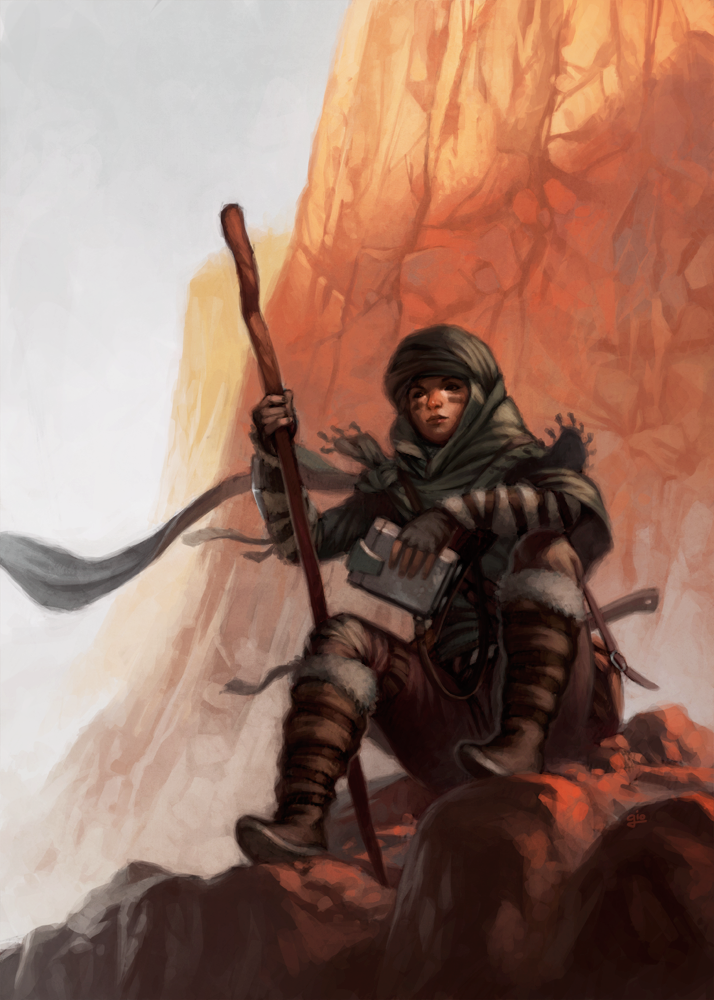 Bycore, the God of Wanderlust and Curiosity. His spirit lives in the roads, themselves.

The God of Wanderlust and Curiosity, Bycore is a deity who watches over and encourages all of those who embark on their journeys; A God of the roads. Traditionally depicted as a young man, clothed in heavy garments of leather and fur, the God is never reliably found in one place, even in the Divine Sea and much less so when in the planes of Tirr. When spotted, he's often easily mistaken for another pilgrim. Unlike other deities, he rarely shows signs of his own divinity, nor does he wear any regalia or noble clothing... instead, he chooses to appear as ordinarily as possible. Chance meetings with the deity of the roads, however, are often marked with fortune and friendliness, and an intelligence that one would not expect from the vagabond that Bycore appears to be.

His ideal is that of Journey, and he is often regarded as a mercurial deity when considered for duties and rites, even among his fellow deities of the Pantheon. Despite this, he is still highly celebrated as a deity, as he is a favorite for all manner of traveling folk, and many prayers are spoken to his name before setting out for a long distance trip. While Bycore himself does not bestow luck, good weather, or calm seas (as the prayers often request), he does value the act of assisting others beset by misfortune, and therefore is associated with good-natured travelers helping each other. Most civilized peoples in Tirr consider Bycore to be the respected deity in regards to prayers for safe journeys and voyages, as well as the patron of Pilgrims of all kinds.

He is also considered to be the God of Languages, as travelers often benefit from learning and practicing multiple languages, and his association with travel often makes his a patron of border towns and cities. This association has given rise to several similar legends about his first trip around the planes of Tirr, in which he brings language from one town to another, spreading the art of words among the mortals of the world.

While Bycore is known by many titles, such as God of the Roads, the Vagabond, the Celestial Traveler, and is therefore held in high regard by those mortals who live in the material sphere, he is often rebuked by his more serious companions in the divine sea. This is often attributed to his frequent absence from the proceedings that occur in the Common Ground, due to his habit to wander.

Followers of the wandering deity are usually pilgrims or travelers of varying natures, and often traverse the roads on an annual basis to visit the famous Shrines of Bycore, the five places where the journeyman God was said to have rested and revealed himself when he first traveled across Tirr. People from all walks of life find themselves drawn to revere the deity, in some fashion, especially when their trades or habits involve travel.

Devoted pilgrims often have complex and individual belief sets, especially when compared to other deities' followers, and can often be at odds with others, and themselves. This is due to the fact that Bycore has no strict moral ideology, and therefore mortals are often left to fill in the blanks, themselves. One exception to the rule is that all followers have a standard: If a traveler has need of assistance, and his journey is imperiled, followers of Bycore will almost universally go out of their way to help him.

The most common and numerous groups have adopted a relatively simple creed, which consists of the pilgrimage mentioned above, and a loosely recited Traveler's Creed, which espouses the idea that all able bodied people must assist others on the roads, as Bycore would never leave any man, kin, or elf stranded.

Priests and Clergy who serve under Balthazar often prefer spells that increase their own mobility and that of others, or free their allies of bindings. They are unlikely to take spells that would impede others, or bind them, and Bycore is unlikely to supply them.

Unlike most Pantheon deities, Bycore does not have a specific type of station or building that serves as his temple in most cities or nations. This is because Bycore lives for the journey, and therefore setting up any single site of reverence would be foolhardy. He does, however, have a series of shrines he is worshiped among, usually small, ornate markers alongside the road, where travelers often gather and rest. Some cities may find it courteous to dedicate their gates or main roads to him, as well, as gesture in bidding the deity and his followers welcome, and wishing for his blessing.

Bycore sits among the Lesser Thrones in the Pantheon, though his status as such a deity is formally challenged by others of the station, especially that of Balthazar and Tirros. This is speculated to be because he often fails to attend the Common Ground of the gods among the Pantheon, which, while it does not hamper the court in any means, is considered to be a reproach against the hearings.

Mara views him with some disdain, but ultimately retains a good relationship with the traveling deity. This is often attributed to his vagabond nature and Mara's community spirit clashing. Other deities that Mara associates with, such as the Great Mother and Era, have good relationships with him.

He is, in the extremely few times he bothers, supported by Jubila, who finds common ground with his whimsical nature, and with Vault, who values his ideal greatly, as travel is the cornerstone of merchantmen and enterprise.

The Vagabond is often considered with indifference by most Aesir, although he has individual relationships with some that may be better or worse. He is not considered to have had much say or intent in the exile of the Aesir, and his ideal is useful to most of their own ends.