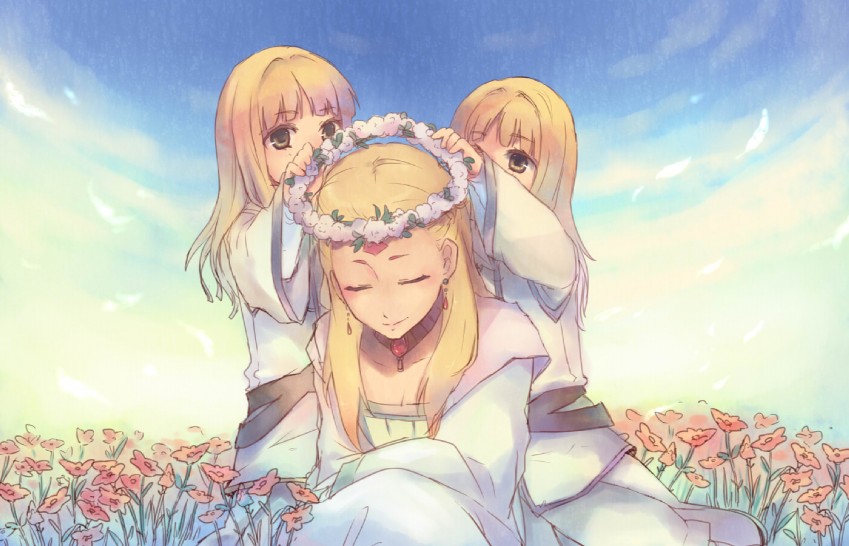 Mara, Midwife and Sister to the Great Mother.

No matter what conflicts the earthly powers of Tirr claim to have, nor how great a cause might divide them, every nation pays homage to Mara, the Goddess of Community. A bearer of many titles, such as Hearth-Goddess, Divine Midwife, and the Family's God, she is quite revered by most individuals who walk the many planes of Tirr, especially those who have fruitful relations with their kin and country. A mostly benevolent deity, Mara is sometimes little different from the Great Mother in most views; They believe that ultimately, love and peace are the keys to a perfect future, though Mara is more pragmatic than her greater counterpart when it comes to violence: Defense of the weak, and of one's family and people are fine. Wars have been fought and won under the banner of Mara, even if seldomly, and this is celebrated; The Great Mother, on the other hand, is not associated with any act of violence.

Her ideal is Community, although it is sometimes expressed as the bonds between people. As such, most of her attention is given to those who look to lead their nations, cities, towns, and families. She is often considered to be the goddess who blesses newlyweds with their first child, as a gift to the new family for entering her sphere of influence, although this is merely superstition. In reality, people who join in wedlock are already within her domain, as this, too, is considered a bond between people. Still, while a number of her interests are vested in love, she also benefits those that seek to better their nations or communities, and is closely related to political factions, because of this.

Despite the wielding the minor authority of a Lesser Throne, Mara wields great influence in the court of the Pantheon, being the maidservant to the Great Mother. She is always closely associated with the Great Mother, often as an adviser or assistant, but perhaps most famously, as the midwife of the Great Mother, who delivered the World from birth, in the widely popular myth.

In the ideal of Community, those who devote themselves to Mara often involve themselves with their communities, to some degree, and with those of others, in the case of travelers and wanderers, although they are unlikely to worship Mara over Bycore, simply because of core philosophical differences - Mara would have individuals live a stable life in their communities, while Bycore would have them go on journeys. Nevertheless, followers of Mara, wherever they may be, often can be found carrying for others in their community, whether they be performing community services for the local area, or even taking on politics and leading their homes as a governor. Indeed, many barons and governors alike often claim to be devotees of Mara.

It is highly stressed that Mara does not encourage blind obedience to the powers that be, even though she does encourage devotion to ones community. Sometimes, it is in the best interest for the community if those who hold power are removed, especially when they are corrupt or may be incompetent. While these individuals are usually expected to step down, oppression and tyranny are still things that occur, and in such cases, the more righteous are championed by Mara, usually in the form of revolution.

Farmers, Patriarchs, and Matriarchs are also often symbols of devotion towards her, as they also receive and benefit from her blessing, and are devoted to her teachings of Family and Harvest, often working in concert with followers of Jubila, as festivity is considered a holy endeavor, as well; It brings the community together, after all.

Clergy of the Mara are often dressed in formal dress and suits when outside of their temples, and change to loose gowns and homely attire when within the temple or at home. This is to show the respect and formality towards their countrymen, but that their hearts lie at home.

Clergy and other worshipers are restricted from utilizing any mind-affecting spells, as Mara does not provide them, and are typically required to consider the place of family in all societies. This results in many a compassionate foe, when her followers would fight, especially when an opponent has surrendered and has a family to speak of.

Temples to Mara are less lavish than some of the other gods and goddesses of the Pantheon, and are usually large, grand structures, but with humble decor. All temples have a banner depicting the Lily, Mara's symbol, and welcome all into their halls. Children are a constant sight within said temples, as priests act as caregivers to many orphans and to children whose parents must work or otherwise be unable to care for them.

Mara sits among the Lesser Thrones in the Pantheon of Tirr, and often defends and/or supports the Great Mother in the political measures she submits. She is considered to be amicable by most other gods, though, as one expects, Mephistopheles believes she is far to idealistic to serve to any real purpose, and Serberus simply hates her. On the other hand, even unrelated deities sometimes acknowledge her, such as Gahss, of whom despite being in constant opposition, respects Mara due to her pragmatic nature towards war.

She maintains good relations with other deities, especially Jubila, who revels in many of the festivals dedicated to her cause, and Bycore, whose followers often benefits from Mara's teachings when moving through towns.

She also has considerable support from Era, who is also considered one of the goddesses of love, along with the Great Mother and Mara, themselves.

She has a muted response to the schism between the gods and the Aesir who resulted from it. She laments the division of the community that the gods once had, and she sees the Aesir with disdain for not disregarding it. She still holds some respect for deities such as Isis and Bahamut, who each went on to found communities of their own, as well as share similar philosophies as her own.