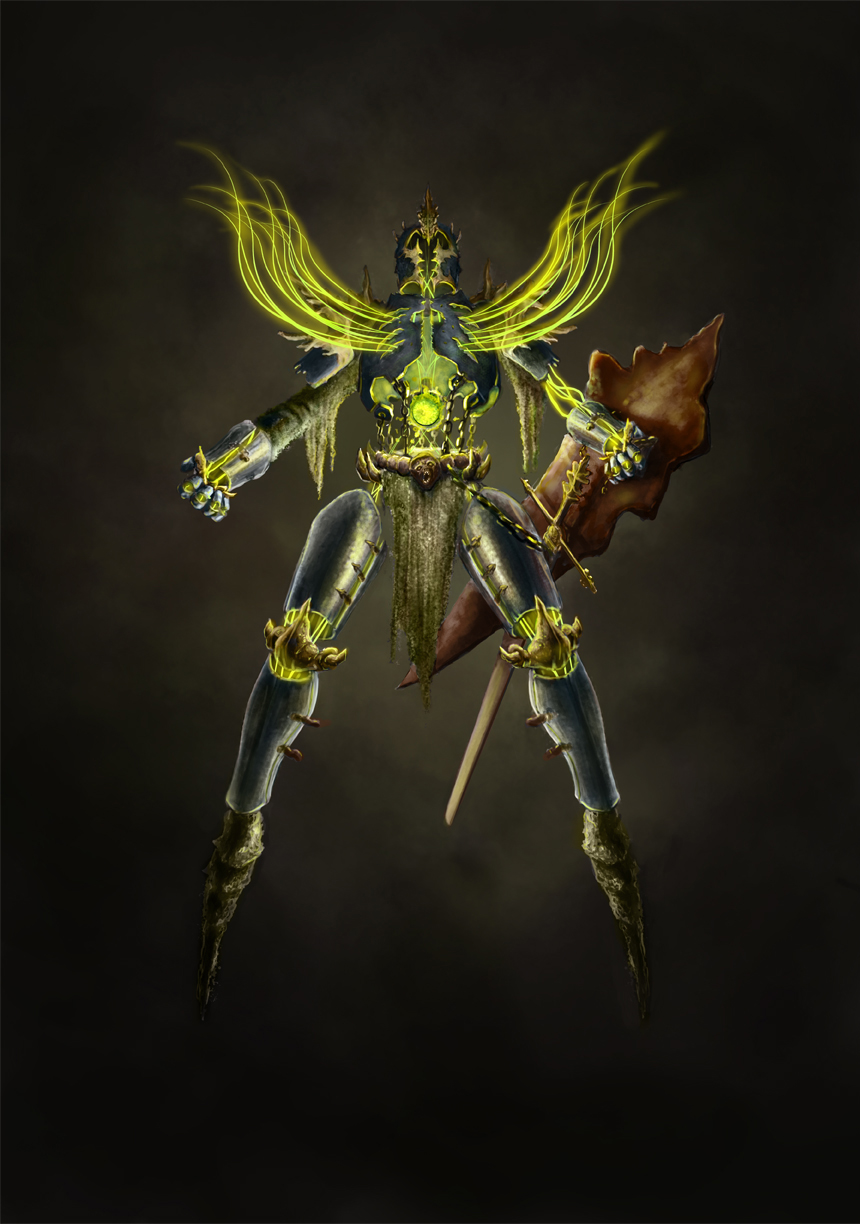 Gahss, the eternal spirit of war and patron of warriors.

As the tireless warrior and spirit of war, Gahss is a fairly imposing figure himself, and wields complicated but otherwise broad goals and influence within the Pantheon, and even if not worshipped directly, he is respected by almost every professional warrior in the Material Sphere, and often prayers are given to him before any battle starts, and duels are announced in his name, demanding that fair, but glorious battle commence. He is invariably described as a amorphous, spiritual being, inhabiting a suit of brilliant platemail, wielding both a shield and longsword. Glory, War, and Victory are all things he takes pleasure in, though he also respects all of his opponents; He cannot take any of the former things from an unworthy opponent.

War, in itself, is a way of worshiping Gahss, and many nations realize this. For this reason, very few nations have specific cults that worship Gahss, barring the very war-like military states, as his worship and thereafter blessings come naturally as civilizations continue to progress; In a very pragmatic mentality, there is a time for war, and otherwise, peace. Gahss and his followers bear no ill will for this philosophy, however, though if given the choice, they believe that in all cases, chasing glory in battle is the best and most thrilling solution.

In terms of actual doctrine, Gahss does not promote peace, but does not condemn it, either. War is a natural state of life, immortal or mortal, just as Peace is, and this mentality is expressed within his followers' beliefs as well. What is set in the doctrine are the ideals of how war is carried out, what determines a glorious battle, and what is considered unappealing. Battle is encouraged; Not for any other reason but for the glory of the fight, usually with a worthy opponent being prized above all else. To fight a worthy opponent is the highest honor, whether that results in victory or death, as the follower of Gahss measures the battle not in results, but in how challenging and how glorious it is. Victory is considered a secondary importance, and is also celebrated. Winning against weaker opponents is not necessarily frowned upon, but it gains no blessings from Gahss, especially if it is effortless.

Gahss' temple is the battlefield. A stationary structure specifically dedicated to his image is very rare, and often is only in the form of small shrines or statues, on battlefields, or in military compounds. Sometimes, the rare structure will host itself as a temple to the god of war, but will often be dedicated to such things as blood-sport, such as gladiatorial combat. As such, followers of Vault are often seen in such structures, making wagers among each other on the victors of each fight.

Clergy and other followers can be of many roles, but almost all are tied to the glory of battle in some way. Some are mercenaries, and earn their living from their passion, hopping from battle to battle, without dedication to any cause or nation. Other are military commanders, practicing their faith by leading entire armies into battle against their nations' enemies. In almost all cases, those who follow Gahss are actively seeking battle; glory within it, victory after it.

Gahss mans a lesser throne within the Pantheon's court. He is notorious for being eager to prove his mettle in physical combat against those who provoke or challenge him, and is often forcibly restrained, along with Serberus. The two begrudgingly respect one another, as they have similar ideals, but also are vastly different. Serberus values chaos and hatred, and just happens to encourage war, while Gahss values war, and chaos and hatred just happen to come along with it. Balthazar is an ally of Gahss, in many cases, since he believes War is a legitimate means of pursuing justice and evil. The Great Mother is his largest opponent, believing that violence should be invariably avoided, when possible. Most other deities have minimal conflict with his ideals, each recognizing a particular value in War, Glory, and Victory.

In particular, he encourages war with the Aesir, instead of banishment, earning him some marked glances in and beyond the Pantheon's court.