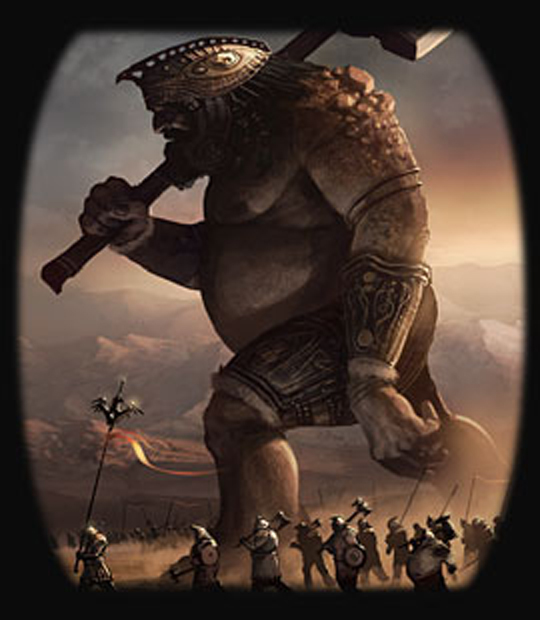 A painting of Tirros, god of nations, boundaries and masonry.

Holding a Lesser Throne in the Pantheon of Tirr, Tirros is usually more of a towering, silent spectator than an active participant. When he does comment on the matters at hand, he often voices his concern in regards to breaching the sovereignty of any entity, even the lowly mortals of the Material Sphere. He is a neutral god, and therefore is less politically affiliated with most of the members of the pantheon, rarely speaking unless he believes his sphere of interests is violated or must be defended; When a breach arrives, however, he is the first to rise, often aligning with Vanguard, the Sentinel, who speaks the Oath and therefore is able to define the law, and therefore the territory, of the gods, of which Tirros believes is sacred: No-one oversteps their boundaries without recompense.

His ideal is that of territory, and as such, he values the idea of autonomy and authority over possessions and belongings, and naturally expects that the rights of any individual or group extend as far as their boundaries and territories, and therefore should be respected within them. While he is largely devoted to the aforementioned values, he is also respected as a god of the earth, and is seen as a more lawful and respectful counterpart to the usually foul-tempered Feylgara.

Tirros often appears as an exceptionally Colossal Giant, and is often depicted as such in art and song. While he is massive, he is also rather passive so long as others respect his boundaries, and those of others. Because of this, he earns a reputation as a gentle giant among the other deities of the Pantheon, and is one of the largest of the deities in their common forms, dwarfed only by Undine. Many depictions seem to humor the idea of such a large creature sitting among smaller ones in the proceedings of the Pantheon, often showing him sitting in a throne much too small for him.

As a deity of territory, Tirros has a place in the lives of rulers and commoners alike, as the concept of boundaries and territories are often important to both. In the first case, Tirros is considered to protect the borders and territories of nations, and thus is considered to be a God of nations, alongside Mara. Given his high regard by the various stone-masons of Tirr, it is not uncommon to see ritualistic prayers, utterings, and images dedicated to the God upon the walls of any nation, especially when along the borders of other nations, clearly marking the territory of each.

Tirros advocates a philosophy of mutual respect of property, territory, and domain to all of his followers and to the world at large. Followers of Tirros are expected to never use his power to undermine the authority and sovereignty of another entity who has not transgressed upon their own; Thus, they are admonished against theft, intrusion, burglary, and other such actions that would breach the authority or sanctity of another's territory. Many clerics and paladins who serve Tirros often perform works in providing wards and resolving disputes or incursions that may happen in their vicinity. It isn't uncommon for champions of Tirros to take up arms in service of the defending locale if they believe an invasion is being performed unjustly.

A number of followers tend to take to stone masonry, and often dedicate their works with carvings of Tirros or prayers to him. Many rulers and communities see such stone as blessed or warding against incursion, while others have a traditional appreciation with making walls with inscriptions toward the God of Territory. These stones are highly valued, and remain a major source of income for most temples dedicated to Tirros.

Temples and Orders dedicated to Tirros aren't so rare, so much as they are usually understaffed. The philosophies of Tirros very rarely attract youth or seasoned veterans who truly feel called to the God of Territory; Such adventurous individuals often feel rewarded more in other avenues. The bold and crusading seek evil, and so instead fight for gods like Helios Majora, Balthazar, and Bahamut. Those with compassion and a desire to heal and lead instead seek orders of the Great Mother, Mara and Isis. Examples abound, but few tend to dedicate themselves to the God of Territory.

One exception exists; Entire guilds of Stonemasons are often dedicated to the God of Tirros, given his traditional tie to the profession, and the fact the relationship he has with territory and the construction of walls and wards. As most priests, themselves, are often Stonemasons at some point in their lives or another, this is to be expected.

Sometimes, priests of Tirros can be found sharing a temple with followers of Vault, owing to their God's teaching to protect the rightful possessions of others, and Vault's followers own desire to profit and needing a place to store their funds.

Sitting upon a Lesser Throne, the outer ring is host to Tirros, who often solemnly sits without word, though will raise objection when his values are slighted. Often times, humor is made in the mortal lands regarding his and other gods' size, showing his as a colossal giant sitting in a tiny chair, nearby other more appropriately sized gods.

He often aligns himself with Vanguard, because Vanguard is the Oath-bearer, and therefore designates the boundaries of the Pantheon and the punishment for crossing them.

Gahss often maintains healthy relationship with him, as well, given his willingness to support war in defense of nations, and also with Mara for similar reasons. He is considerably well-received by most members of the Pantheon, as his values do not tend to wholly conflict with anyone, with the exception of Serberus, who abhores the idea of authority and territory, as they restrict the wanton acts of disregard that he embodies.

Tirros is also charged with maintaining the Material Sphere, and is credited with being one of its three creators, as a prison for the sundered remains of the tyrant god, Varglokirr. He shares this prestigious position with Fate, who wove the fabric of time in the world, and Mana, who created harmony with the primal threads that binds all the planes together.

While Tirros does not seem to be affected much by the plight of the Aesir, he does seem to favor the plight of Alcyone more than others, as the two used to get along before the creation of the Pantheon, due to their closely aligned ideals.