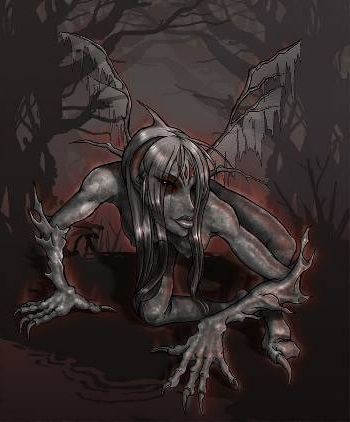 The hateful creator-deity of the goblinoids, Macha hates the Men, Elves, and Kin of the world, and seeks to bring ruin and corruption to all.

A foul goddess whose name is uttered in both fear and revulsion among the tribes of the surface, Macha is universally despised and feared, even by her own worshipers, due to her abusive and hateful nature towards all living things, but especially those of the world on the surface of Tirr, a group of creatures she finds repulsive and seeks to corrupt to her own ends. She is naturally antagonistic to all, and only serves herself; Any who approach her, if not killed, often find themselves subject to some form of horror or another.

She often appears as a repulsive creature of some kind or another, often one deformed in some way or another. She enjoys taking the form of a Chaos Beast at times, but seems especially prone to appearing as a hideous, filthy goblinoid of some kind, or some kind of corrupted fey.

Her ideal is that of corruption, and as such created the various goblinoids and set them upon the land in order to harass and harm the mortal races of the world. She also is responsible for the creation of numerous corrupt versions of existing races, such as the Drow, who are corrupt elves remade to the goddess' desired specifications, and the Sea Hags, which are corrupted Merfolk. Despite being a creator-deity, however, rarely is Macha earnestly worshiped by those races whom she has begotten, although they still statistically make up the largest population of followers; Those who worship Macha do so out of fear or respect, and fewer still worship her with an intent to serve directly as a Cleric or Shadowknight.

Aside from generalized races, the goddess is also responsible for a number of curses and blights that infest the world of Tirr from time to time, chief among them the curses of Vampirism and Lycanthrope, which afflict almost all living creatures. This has led to her being synonymous with curses and illness in most cultures, even moreso than her counterpart, Fir, who governs Spite. Many a Clerical or Paladin order has sought to wipe the followers of Macha from the surface of the world, and purge Tirr of her tampering once and for all.

Macha embodies the ideal of Corruption, and therefore the qualities she tends to require from those who worshiper tends to follow similar themes. She abhors cleanliness or brilliance, and encourages filth, hatred and vileness in her subjects, and is not above reducing many of her followers to dust, or even to a mindless stupor. Those who intend to follow her are usually insane in some manner or another, or at least are sociopaths in their own right, unable to empathize or identify with cultural norms.

Cruelty and Sadism are emphasized qualities in followers of Macha, and are often equated with her worship; Those who follow the goddess are highly prone to random acts of harm and are not above maiming a creature just to see it struggle in agony. On the other hand, organized bands of followers are even worse, as there are few rules restricted what they may or may not do in order to achieve their ends. War with such groups is often heinous and filled with unspeakable horrors, and biological weapons of terrible effect and power are highly approved of by the Goddess of Corruption, as is torture to the point of destroying another creature's psyche.

For a follower of Macha, no creature is sacred and everything is permitted. The more of an affront to the Gods and standards of the world, the better, for the Goddess desires this corruption more than anything else. Even other followers of the Goddess are not directly forbidden from being targeted by the mad whims of her followers. In her world, only she is truly beyond reproach.

There are no major temples or shrines to the Goddess of Corruption; Not on the surface, at least. Such things are often destroyed quickly when they surface by the various orders of adventurers, Knights, Clerics, and Paladins in the world, who typically find the Goddess to be a danger to the order of the world, and to life itself. Many shrines and temples can be found in the world below the surface, however, often called the Underdark or Underworld, in the societies of various Goblinoids, such as the Hobgoblin Khanate, or the Drow Matriarchy.

Clerical orders largely only exist in these same societies, and largely are reclusive and prey on the populace around them until such time that they can find a means to torment those on the surface.

Macha is typically abhorred by those of the more noble persuasion, such as Bahamut, Balthazar, the Great Mother, Mara and even the usually amicable Undine. The relationship with these entities is entirely mutual, however, with Macha seeing each of them as unable to comprehend the true beauty of her ideal. Alcyone does not openly discourage her, but is suspected of disliking the goddess' depiction of her race's corruption.

Jubila, specially, reserves great stores of distaste and revulsion for the goddess, as their ideals and natures make them natural enemies, demonstrated by a history of Macha having corrupted and defiled many of the arts and monuments made in Jubila's name, as well as spreading discord and strife to disrupt her festivities.

Tiamat and Feylgara are common allies of Macha, although the former finds her obsession with corrupting the weaker races trivial, and the latter takes personal dislike in the ravaging of many of her mountainsides, as well as Macha's personality, which she derides as childish.

Somata is a close ally of many of Macha's endeavors. The two share many traits, and the Wind god often upholds her ideals in attempting to steal the rains and storms of his sister-god, Munsa.