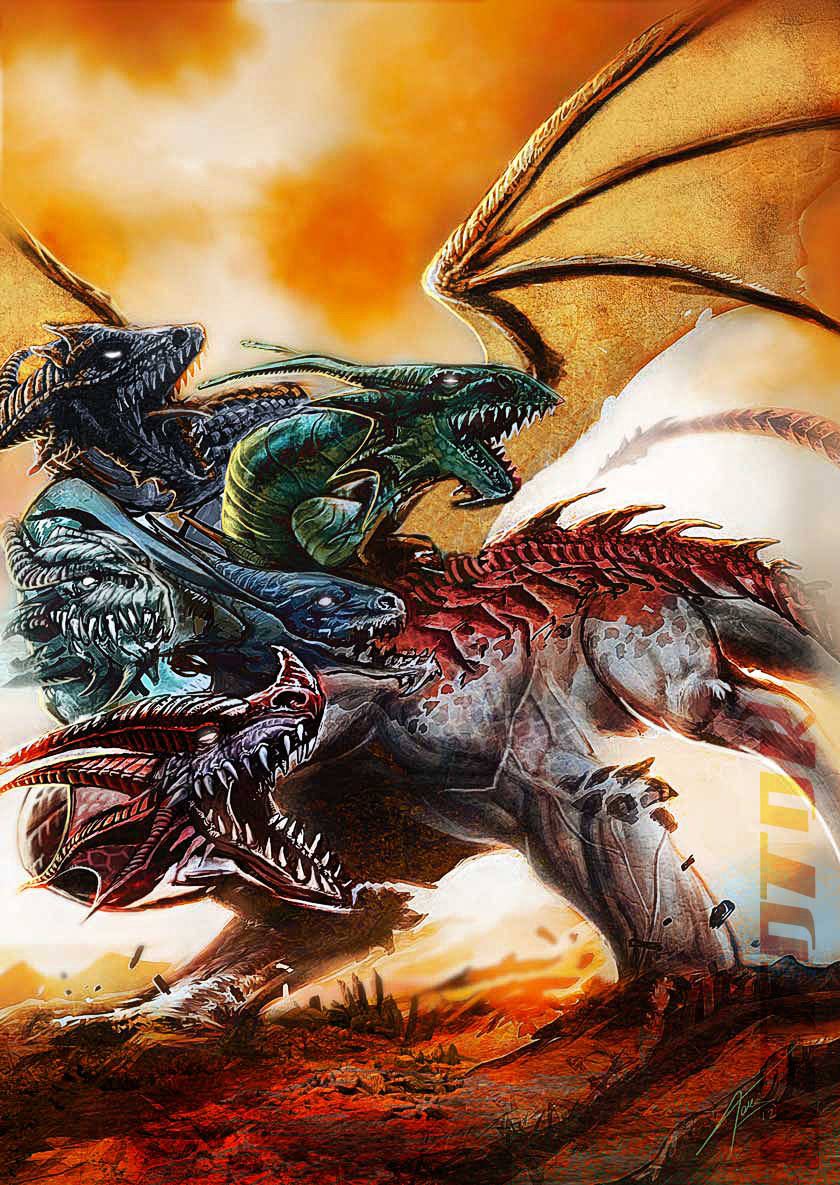 Tiamat, the Queen-Consort to, and eternal nemesis of Bahamut. She hates all mortalkind for their own weakness; Even her own servants are not safe from her wrath.

The Exiled Queen-Consort to Bahamut, Tiamat holds a vicious hatred of the God-King of Dragons and all that he stands for. She embodies the ideal of Supremacy, and therefore believes that the weak of the world are deserving of eradication, finding that only those who fight and dominate in order to survive as worthy of such a privilege. This naturally clashes with Bahamut's ideal of Magnanimity, and the actions between the two following their banishment as Aesir from the Pantheon. While her counterpart sees the Pantheon's decision as regrettable, Tiamat sees it as an act of cowardice, performed by a group of deities frightened by their own weakness and inability; She revolted against the decision to exile the Aesir, and was only successfully banished from the Deific Sphere when none other than Bahamut, himself, dragged her down to Tirr.

The rift between the two gods, each representing different sides of the same virtue, only continued to deepen as Bahamut began to ponder the newly emerged mortals that appeared on the surface of Tirr's Material Plane. Even worse, when Bahamut witnessed Sympatheia fall from the Deific Sphere, carrying the Light, he became more and more tolerant and caring to the mortal races, eventually to the point of receiving the newly evolved Dragonkin as his own, enraging Tiamat to no end, and sending her into a frenzy in which she sought to eradicate the mortal races of Man, Elf and Kin. The ensuing battles between the two dragon deities culminated in Tiamat's defeat, whereupon Bahamut banished her from his sight, forcing her to escape the Material Plane and instead take up residence within her demi-plane in the Abyss, the planes of evil ruled by chaos. She regularly attempts to return to the Material Plane, but Bahamut, who has since ascended to the Astral Plane repels her.

Despite her intense hatred for the mortal races of Tirr, she does find some use for them, as her status as an Aesir requires her to use indirect means of implementing her plans of conquest, despite her reluctance to employ less than direct means. As such, she does make an habit of attempting to gather capable lieutenants, and is fiercely strict in those who she might receive into her service. While the loyalty to her philosophy she requires might be considered excessive compared to the followers of most deities, sure enough, she does manage to gather a rather large amount of followers, even among the hated Dragonkin. These followers are begrudgingly imparted powers useful to their station, but failure is not tolerated.

When Tiamat appears before mortals, she often takes the form of a massive dragon with five colored heads, each one of a different color and with the potential breath weapons of each color of chromatic dragon. She is a vicious and mighty deity, and in this form, that is communicated completely. In some literature, records of her appearance as a female Humanoid of various races exist, often wreathed in black hair and fine dress, but keeping the air of contempt and hatred about herself.

Those who are brave enough to follow Tiamat are not granted any special exemption from her ideal of Supremacy. She views the races of Man as weak and expendable, though many other races do not fair much better, even among the dragons and dragonkin who form the majority of her adherents. In order to serve the Queen-Consort to the God-King of Dragons, one must openly and actively declare their supremacy to the world, and thereafter pursue it against all those who might challenge it. For this reason, followers of Tiamat are generally considered trouble-makers, at best, and reckless menaces, at worst.

Those that do manage to find level of service with Tiamat often only do so after participating in some manner of bloodsport, fighting and triumphing over weaker foes, only being recognized after they are bloodied and standing tall over their enemies' corpses. These individuals almost always bear some level of Zealotry or otherwise overwhelming lack of empathy for other individuals. Often times, followers are encouraged, if not outright demanded, to attack and do harm to those who seek shelter in their cities, hiding from the brutal world around them, and even more so against the followers of Bahamut. The two factions of the dragon deities often come to blows against one another.

While often chaotic, some more level-headed followers of Tiamat's ideal dedicate themselves to bloodsport and supremacy without the need to actively destroy and attack others. They find merit in the ability to demonstrate their power against another, though they rarely have qualms about actual killing in order to achieve this. This can lead to warriors with few equals roaming the world, seeking out the strongest enemies they can, simply for the sake of proving themselves stronger. A number of these individuals often end up participating in the various underground sports in many locales, and it is not uncommon for local authorities to find many of the participants of these illegal sports to be followers of Tiamat.

While Tiamat does have a formal temple dedicated to her worship, they are often very cloistered, and are not located in any known city on the Material Plane of Tirr. The one known temple is the Temple of the Abyssal Dragon, located in the Ashen Coast, atop a mountain on the eastern side of the Dark Caldera. Given its remote location, the treacherous climb to the temple, and the fact that the region is known for its frequent, year-round bouts of volcanic activity, the temple is often difficult to reach, ensuring that only the strongest and most determined are even capable of reaching it.

The clergy within the temple are often training acolytes mercilessly, before subjecting them to battles against one another, to the death, in the name of their god. It is not uncommon for these acolytes to even kill their masters before fleeing the temple, unleashing this same evil upon the world. More generally speaking, however, Tiamat prefers to hand-pick those who come into her service, usually by sending them visions of her demands and instructing them to either accomplish great feats in her name, or to attend the temple, and succeed her trials.

Tiamat is feared as one of the strongest Aesir, but is relatively kept in check by Bahamut. Despite this, the very threat of her escaping and wreaking havoc upon the world of Tirr keeps many entities in service to, or at least allied with the Bahamut. Her constant attacks, and the encouraging of her followers to attack, upon Bahamut have all but made their relations that of enemies, despite being mates.

Having been Bahamut's mate in the past, she bore three demi-god dragons to the world: Sot, Sadon, and Ved, the three original dragons who sired the entire Dragon race, each one representing a different branch of draconic lineage (metallic, crystal, and chromatic, respectively).

Tiamat enjoys only temporary alliances with other deities, and only those that serve her own needs. She abhors Mephistopheles due to his less than direct methods, which she views as cowardly, but will entreat him when it serves her, ultimately. Rarely does she manage to stick to any plans the two manage to concoct, however, as she becomes enraged, easily, as has little care for such machinations. For the same reasons, Serberus and Tiamat share mutual ideologies, but consistently insist that the other is the weaker of the two.