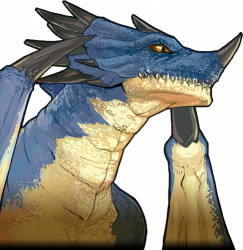 The Aesir that were banished to the Material Plane of the world of Tirr have done more than simply dawdle about before falling into a deep slumber. Their mere presence affects life as it progresses, and indirectly spurs the course of evolution. This is especially true with the Dragonkin; A race that was originally composed of humans, but since had evolved over centuries of influence from the dragon gods, Bahamut and Tiamat.

Originally, it was Bahamut himself who caused the ancestors of the Dragonkin to come to worship himself and Tiamat, as the Dragonkin were a race of savages and barbarians. They had no central governing body, nor any true order between the various tribes that existed, and this left them vulnerable, and easily taken in and crushed by the other warring races of the time. It was a sad fate, and Bahamut pondered it with compassion, whilst Tiamat scoffed and chided him for his pity. It was only after the Starfall occurred, in which the Goddess Sympatheia stole the Light from the Realm of the Gods, determined to give the kind of both Man and Kin a chance against the deities of the Pantheon, should they ever try to destroy Tirr, that Bahamut took action.

This event, witnessed and understood by the Aesir, across the planes and beyond, but perceived merely as a meteor shower to the mortals that lived in the world, caused a stir inside of Bahamut. He mourned Sympatheia, despite having taken a different path than her, and he took her will to heart... that man and kin were worth preserving. From that point on, Bahamut became the patron of the Dragonkin, contact with the mortals causing a slow, generational change that eventually made them into the Dragon-like creatures they are, to this day. This event, however, caused a rift between the platinum dragon and his queen-consort, Tiamat, to slowly grow, however, as she resented what she perceived as coddling lesser creatures, and even more-so when several wars followed that pitted the Dragonkin against other races, especially the races of Men.

In time, factions developed, and in the time of the Schism, those Dragonkin who harbored deep-seated hatred against humanity took sides with Tiamat, and fled with her when Bahamut banished her from his sight. 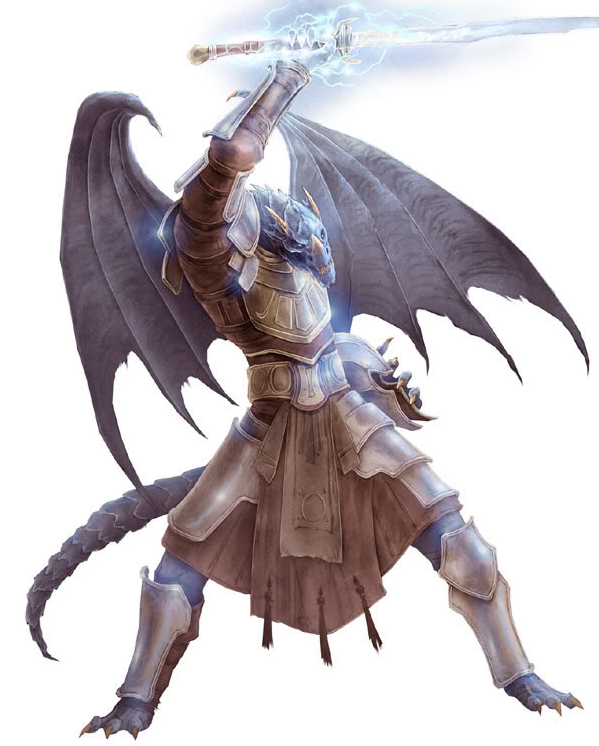 The Dragonkin makes for a fearsome foe.

Prideful and Imposing, the Dragonkin that inhabit the world of Tirr share few traits and ideals, but all of them have an appreciation for fine metalworking, as well as for rare metals themselves, something they share with true dragons, and a taste for the more precious things in life, such as rare solitude, the rush of combat, and bonds between close allies. They also happen to believe in furthering the potential of their powerful bodies, believing that honing the natural power and fortitude is one thing that makes them exceptional. Beyond this, however, most Dragonkin are as varied as most humans are in their personal belief systems.

To other races, Dragonkin believe they are superior in nature, and therefore usually can either come off as magnanimous or condescending, with reactions varying between individuals, and are usually found in all cities in some quantity or another. The large majority are nomadic barbarians, despite those who live in the cities. Elves, in particular, along with Merfolk at times, seem to bear the brunt of ridicule or jest from Dragonkin, as they are seen as being particularly frail among the races, no matter how untrue individual cases may be.

True Dragons tend to have mixed opinions, as well, regarding Dragonkin. Some may find them as lesser siblings, while others may conclude that they are mere mockeries of their race.

Dragonkin are a highly diverse race, similar to elves in outward appearance, and somewhat proportionate in differences derived from pedigrees; Dragonkin typically appear similar to dragons of their derivative nature, as Dragonkin always resemble at least one form of dragon, and inherit similar abilities and tendencies, including alignment. Despite this, almost all dragonkin have working wings and tails, with males consisting mostly scaly skin, and dragon-like skulls, while females retain a more lithe, human-like figure and face; Usually, a large portion of their body is covered in scales, as well, though the torso and face can often not be covered.

Chromatic Dragonkin, following their usually evil nature, tend to revere Tiamat, while their Metallic brethren worship Bahamut. Typically, followers of Bahamut hold no real grudge against the Pantheon or its pious crowds, though Tiamat's followers are very different; They look down on all who do not revere Tiamat.