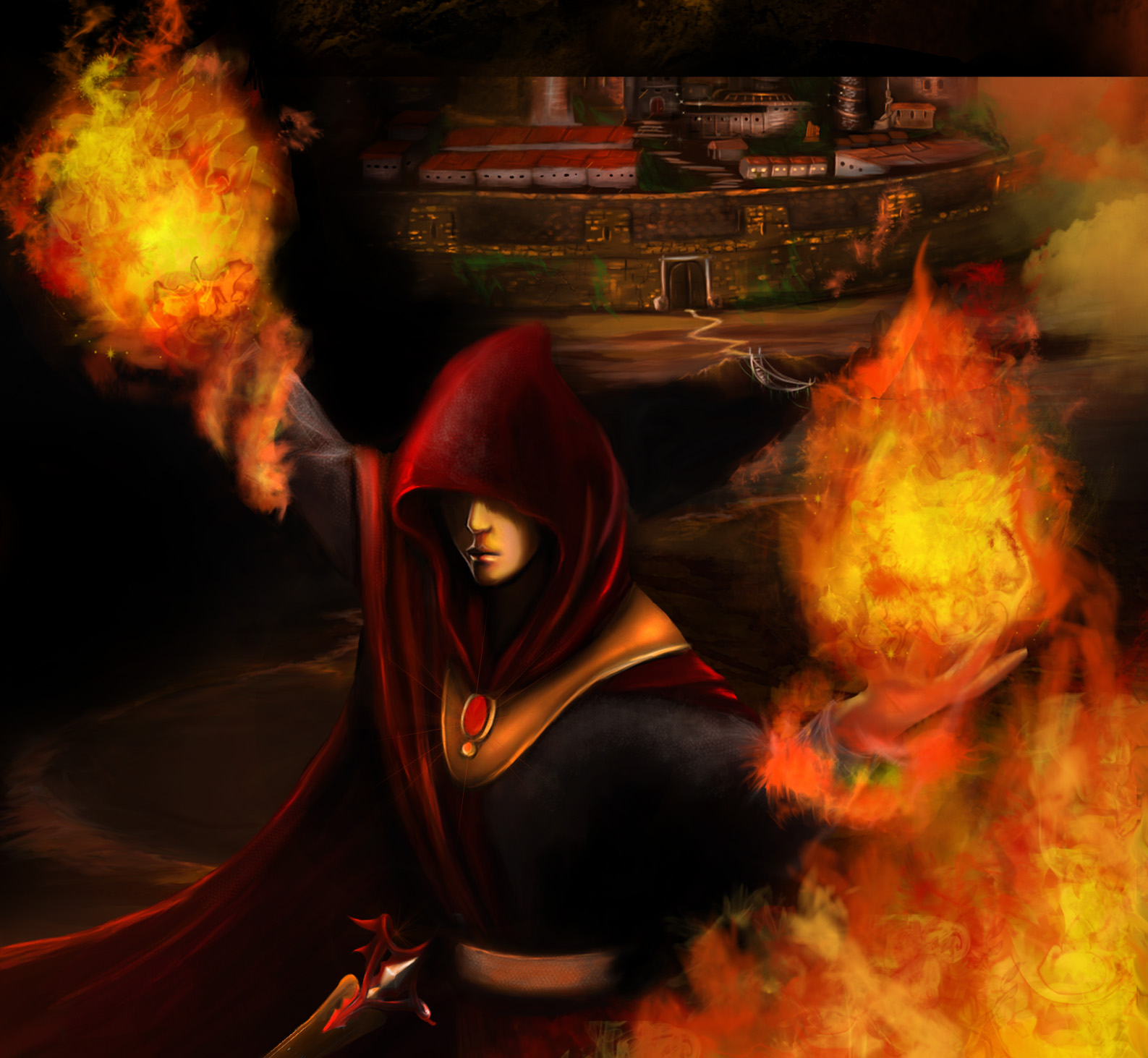 The Fire Elementalist is a fearsome foe, wielding the primal force of fire to its fullest!

Wizards and Sorcerers alike have an entire world of magical properties at their fingertips. Some of the more combative spellcasters choose to further specialize in a single type of elemental affinity. We call these "Elementalists".

One might be tempted to think of the traditional form of the elements, or they might be thinking of the three elements of lore; An Elementalist isn't necessarily so cloistered, nor so lucky. They just happen to have a practical or even subjective preference for a particular type of spell over another. It's natural, really. Some people just seem to enjoy fire a bit more than other, and others might prefer a helping voltage of Electricity. Mages, specifically, who have such preferences and build upon that with their experience and experiments, end up becoming Elementalists, masters of the elements.

Arcane Spellcasters often become Elementalists in the pursuit to develop more powerful versions of their favorite spells. In the hands of a normal wizard, a fireball is nothing to sneeze at; All-around a useful spell for clearing out the less savory denizens who seem to be oblivious to the folly of attacking a mage while being close together. In the hands of a Fire Elementalist, however, the very same fireball is recognizably more dangerous, burning hotter, brighter, and even bigger. It's a matter of practicality.

Elementalists are spellcasters who build upon an existing course of study, therefore they typically remain loyal to their original arcane classes' preferred attributes.

The Elementalist is essentially a Sorcerer or Wizard... perhaps even a Bard, who has further specialized their arcane capabilities towards a chosen elemental affinity. All of the following are class features of the Elementalist.

Spellcasting: At each level, you gain new spells per day and an increase in caster level (and spells known, if applicable) as if you had also gained a level in an arcane spellcasting class to which you belonged before adding the prestige class level. You do not, however, gain any other benefit a character of that class would have gained. If you had more than one arcane spellcasting class before becoming an Elementalist, you must decide to which class to add each level for the purpose of determining spells per day, caster level, and spells known.

Elemental Affinity (Ex): At first level, an Elementalist must choose their specialization from the following elemental effects: Acid, Fire, Cold, Electricity, Force, Sonic. This type of effect becomes their chosen specialization for which all Elementalist class features apply to.

Elemental Damage (Ex): Spells that are aligned with the Elementalist's Elemental Affinity are cast at a bonus of +2 to caster level for the purposes of determining damage dice, so long as the damage is dealt directly at the time of casting the spell, or is a prolonged effect applied by the spell. Furthermore, all damage dealt by these spells gain additional elemental damage equal to the Elementalist's class level.

Elemental Crafting (Ex): Any magical item that an Elementalist creates, so long as it is created entirely with spells of Elemental Affinity, costs half as much in material and/or experience costs.

Combat: Elementalists take generally the same role as Wizards, Sorcerers and other heavy spellcasting classes in battle. The only difference is that Elementalists are specialized to specific elemental affinities and are more likely to focus on that particular part of their capabilities than others.

Advancement: Sorcerers and other arcane spellcasters are drawn to this class because they seek to improve their capabilities and effectiveness in battle, but also because they find themselves more akin to certain elemental values. That said, this is simply one type of specialization that does not necessarily preclude any others. Many Elementalists have gone on to become Archmages or Thaumatugists, for example.

Resources: An Elementalist can expect no more or less luxuries from the world around them, outside of some cultural or religious values that might happen to shape their lives. For example, while there are a number of arcane academies and guilds throughout the world of Tirr, whose members might very well be Elementalists, there are no notable institutions that sponsor Elementalists, exclusively. A temple in the service of Vok, the Aesirean God of Fire and Forge, however, might treat Elementalists who specialize in fire more preferably than other travelers.

Elementalists are essentially highly trained Wizards and Sorcerers who work hard to apply innovative and powerful new methods to the applications of their chosen elements. This allows them to tap the fearsome primal elemental power that aligns with their elemental affinity, and direct that power towards their current endeavors.

If casting a spell as a Wizard or Sorcerer would be akin to opening a small window to the primal elemental force, the Elementalist seeks to find that window and cast it wide, using themselves as a conduit between the primal elemental force and their objective. Because of this specialization, and the devotion needed to maintain it, other characters in the world might well often see Elementalists as a mixture of obsessed or diligent, often to the point of uneasiness or admiration. They do not typically enjoy much difference in reception than normal arcane spellcasters, however.

NPC Reactions: Those who do not know any better, such as Barbarians, Commoners or others who are ignorant of the complexities of magical properties, are likely to just see Elementalists as if they were any other Wizard or Sorcerer: A wielder of magic. Those who are more experienced with the arcane arts, however, will recognize the difference between themselves and an elementalist, although some still might find more prestige elsewhere.

Characters with ranks in Knowledge (Arcana) can research Elementalists to learn more about them. When a character makes a skill check, read or paraphrase the following, including information from lower DCs.

Elementalists in the Game[edit]

Once more, Elementalists are essentially highly trained Wizards and Sorcerers who work hard to apply innovative and powerful new methods to the applications of their chosen elements. This allows them to tap the fearsome primal elemental power that aligns with their elemental affinity, and direct that power towards their current endeavors.

Adaptation: While Elementalists in other campaigns may not have the same origins, possibly due to differences in the planes, forces involved, or deity and/or universe modifications, they should be able to fit into any campaign that allows normal Wizard and Sorcerer classes without issue. Essentially, they're just these classes with high-focus on a single elemental value.

Sample Encounter: A group of seasoned travelers are welcomed into a small town, and upon asking around for work, are conscripted to help evict an Elementalist of the Fire Affinity, whose constant experiments and tests with his craft continue to endanger homes nearby. Being a former sorcerer who just recently began specializing with his affinity, he is dangerous enough to hire outside help, but should be within the bounds of the travelers to handle.

EL 7: The Elementalist isn't happy to hear that he's being evicted, and fights back against the party! He needs his home for his research and he possibly doesn't see his experiments as all that bad. Specializing in Fire Affinity, his fire spells deal extra damage to the party, all the same!