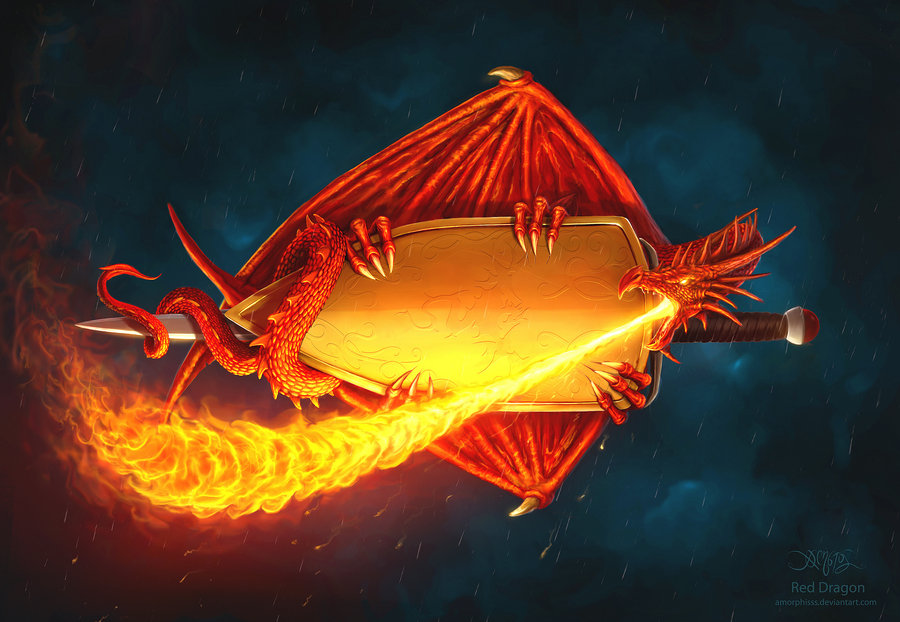 An artistic depiction of Vok, the Aesirean god of fire and forge. A master of smithing, he is responsible for many of the great artifacts of Tirr.

One of the great elemental deities of the world of Tirr, Vok is revered as a god of fire and forge among the Aesir, and has a long history with the events pertaining to the Material Sphere, and is thusly well-known throughout the world, for better or worse. As a deity without any real regard for the lives or welfare of others, he is renowned as a selfish and capricious deity, though he does honor the few promises and oaths that he makes.

One of the greatest legends of Tirr involve himself and Bahamut, making the instrumental pact to defeat Proditor as he attempted rebellion against the Pantheon, along with the resurrection of Varglokirr. With Vok's betrayal, Proditor was unable to hold his ground, and was quickly defeated by Bahamut, though, the pact also limited Vok from ever performing any evil act, again; While inherently indifferent to, sometimes even scoffing at, the worth of mortal lives or morals, he upholds this pact to the current day.

Often depicted as a great, fiery dragon with molten-red scales, while other sightings and depictions describe him as a colossal Fire Elemental. He also frequently takes refuge in the Elemental Plane of Fire when he falls into slumber, because of the immense concentration of ideals that provide him strength, and therefore allow him to stay active for longer periods of time... the vast majority of which he spends in the Ashen Coast region, in his fiery lair within the Dark Caldera and Obsidian Caverns, where he constantly collecting many great precious metals and artifacts, as well as crafting and refining his own.

The occasional traveler meets with Vok, often to entreat him to create or repair an item. While the god is far from generous, he often will at least consider the request, even if he usually declines such requests. When doing so would truly interest him, however, he is often eager to begin, and sometimes will even attempt to trade off less valuable items for anything he deems of exceptional quality.

Vok, while an evil god, is an honorable one, and therefore does not attempt to escape the pact that he had wrought with Bahamut; Instead, he focuses entirely on his truer passion, and the one that mortals, ironically, are able to appreciate him for: The way of the Artisan.

A deity of the fire and the forge, the god is constantly striving to improve and perfect his work, even on the divine level, constantly creating and reworking artifact after artifact, even eventually scrapping them and starting anew. As such, he embodies the ideal of Artisanry, and as such, values the worth of any living thing or material in terms of its overall quality or skill. Morality matters little to him, nor does desire, especially in regards to those who would object to such classification. All he sees in the world is the need to be needed: The innate desirability that results from being especially valuable or providing a valuable service or collection of skills.

As such, those who typically follow Vok, even if relatively few in number, strive hard, toiling long into the night, to become master artisans, craftsmen whose skill is distinguishable on a world-wide scale, that even their god might take note of them. Acknowledgement of Vok is extremely difficult to earn, however, and those who have are only a handful of individuals in history.

Vok only has one major temple in the material plane of Tirr, located in the capital city of Skykeep within the Ashen Coast. Given that his lairs are extremely close in proximity, and that the nation manages to remain competitive and independent largely because of the craftsmen that the god inspires (along with the valuable metals that are mined from volcanic mountains, nearby), he is considered a patron deity of sorts, even if he does care little for the city or its people.

Clergy of Vok are often great smiths or aspiring artisans, and their hierarchy is split up into different castes based on the quality of work that one can produce. Those who produce greater works rise higher in leadership of the clergy, as well as are given more and more resources of the order's to pursue their own arts.

Shadowknights and other martial classes who follow Vok and are involved in the clerical orders are often sent out into the world to gather different artifacts, especially when one is lost to the world. They believe that by studying the artifacts, they can improve their own magical enchantments and skillful crafting, although they are often granted such powers purely for the sake of pursuing these objects at the behest of their deity.

Vok maintains the typical relations with most of the Pantheon, as an Aesir who rejected their way; Having conspired against them along with Proditor, Tiamat and the others, however, has made most trust him even less, though Bahamut has held him to his word and often defends him when others seek to hold him accountable, declaring that the crafting God is his responsibility.

Tiamat views his betrayal with fury, and often attacks those who make any mention of him on sight; She also has fought with the fiery god multiple times, often in her favor, until Bahamut ultimately comes to his defense. He is viewed with a traitor's stigma with most of the Aesir, although some deities are less judgmental towards him, such as Undine who has no hard feelings towards him, despite being of completely different natures and elements, and Mana, who he has collaborated with multiple times in pursuit of his science.