This page details the Thri-Kreen, as modified to fit the Tirr setting. You may be looking for the Thri-Kreen found in the Monster Manual II. 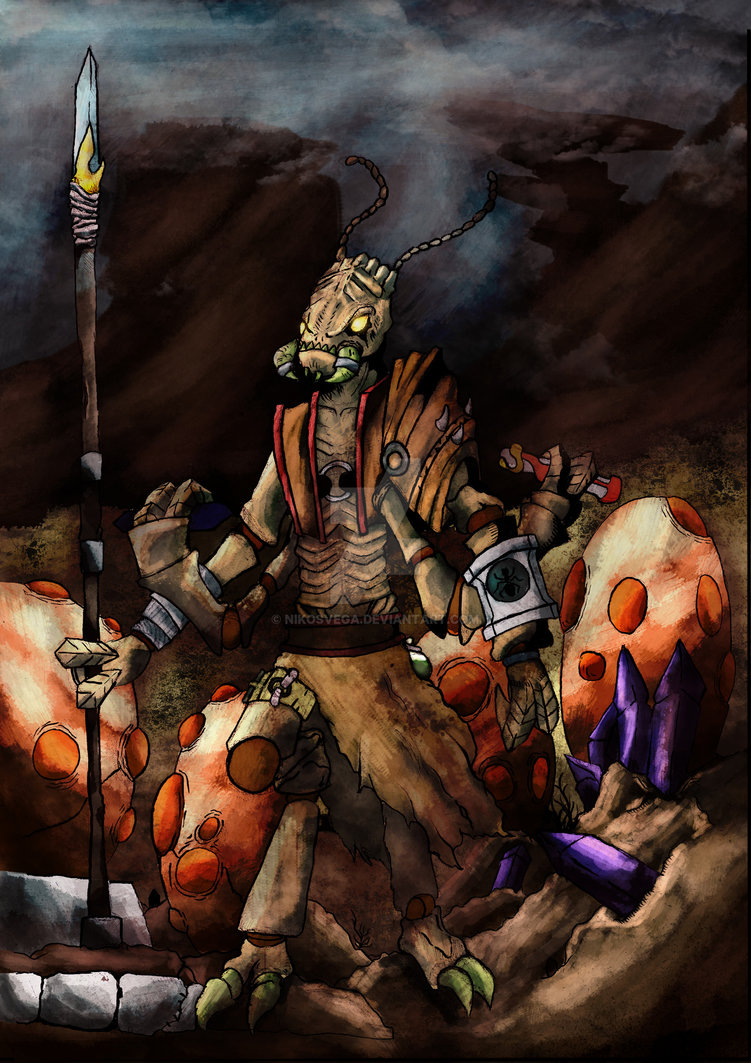 The Thri-Kreen are a strange and unique race in the world of Tirr; Although numerous, they are not particularly strong, but possess many powerful natural talents.

The Thri-Kreen are a highly versatile and diverse race of mantis-like humanoids who populate the surface, and in greater numbers, the Underdark. While they do appear on the surface fairly frequently, usually among grassy plains or desert regions, they usually have their hives in subterranean areas, and explore these areas for expansion and defense. Typically, they do have territory disputes with other subterranean races, such as the dwarves, drow, and the hobgoblins. While somewhat less powerful and intelligent than other races, the Thri-Kreen's large numbers and natural abilities, including latent Psionics, allow them to hold their ground.

They are a rather dextrous race that largely acts on inherited instinct rather than intelligence, and their frightening visage can be disconcerting for some races who are unused to seeing them, or other monstrous humanoids. This distance from civilized society often sees them living on the brink of civilization. Their short lives are offset by numbers, however, and they possess a lingering genetic memory of their ancestors. From the moment of their birth they possess basic knowledge how to hunt and survive.

Compared to humanoids, Thri-Kreen personalities are fairly alien, from an outsider's point of view. Fundamental, traditional beliefs are a constant in Thri-Kreen society, as they have a faint sense of instinctual and genetic memories from their ancestors which helps to shape their personalities.

Almost all Thri-Kreen are hunters of some kind, and most are typically proud of their self-sufficiency, with a neutral and naturalistic viewpoint most in common with druids or rangers. Predator-Prey relationships exist in all walks of life, and this extends to other sapient humanoids, much to the dislike of civilized races who consider such an idea to be largely barbaric and savage. That said, they are not without an inkling of self-preservation, and are unlikely to hunt dangerous prey, such as humans, without some distinct lack of other options or without extreme numbers and a back-up plan. Thri-Kreen are able to understand civilization, even if they are not considered part of it, and are unwilling to pick a fight with the small part of a large nation, for fear of their lives.

This often strains relationships with other races, and some towns and cities bar Thri-Kreen from their interiors because of these traits, but some races still are able to appreciate them. Kerani, for example, does appreciate the nature of the Thri-Kreen, even if they do not share it. The Coug'r and Half-Giants of the world view the Thri-Kreen with some curiosity, due to sharing the latent psionics of their own races, but do not especially associate with them any more so. Other societies often find it hard to accept the Thri-Kreen, but friendships between the races are not unheard of, nor discouraged by the Thri-Kreen. 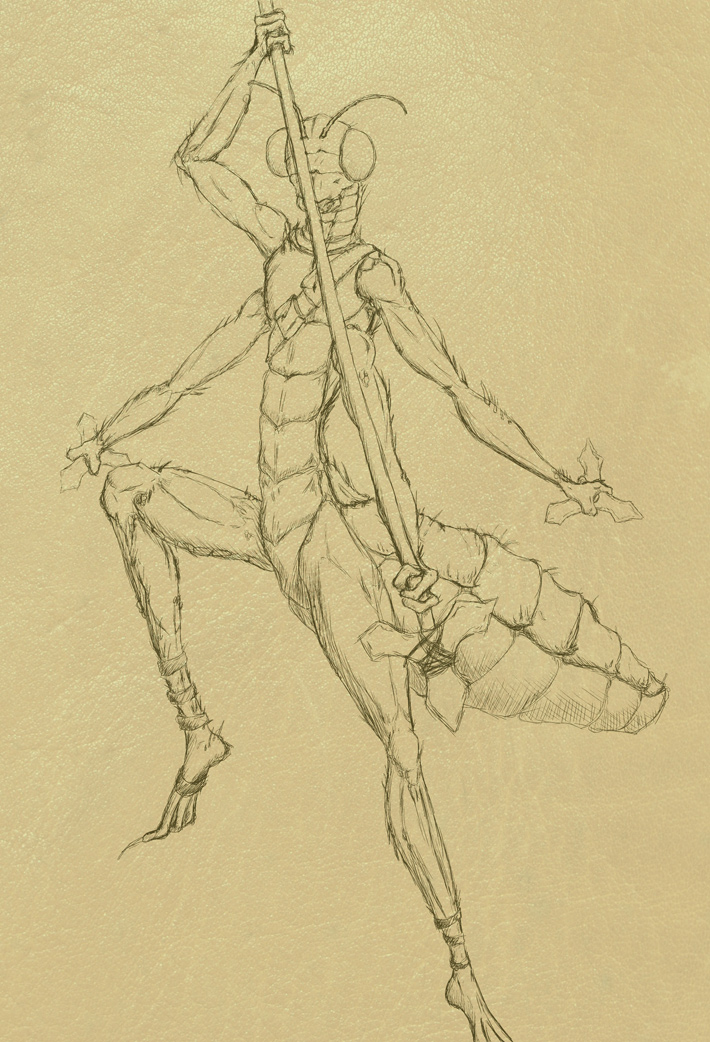 Thri-Kreen use all four of their natural fore-arms to great effect in combat, often to the dismay of their foes.

Thri-kreen are mantis-like humanoids, who, by some accounts, resemble ants. Their most significant feature, aside from appearance, is their four arms, one large, normal pair and one smaller pair of arms beneath the first. They have bulging eyes, large powerful legs, clicking mandibles, and an armored exoskeleton. Their coloration ranges from sandy browns, yellows, and reds to coppery green and glossy blacks, depending on climate and diet. They possess thin tongues and have a buzzing hum to their voices.

Thri-kreen lay eggs for reproduction, which is often buried under warm sand or kept in a warm but dimly lit place. Children, called nymphs, are born with basic mobility through crawling and age rapidly. They are raised by their entire tribe regardless of their original parents. Their short lifespans mean they live fast. They consider living on through their children to be a form of immortality, and as such rarely dwell on their inevitable death by old age.

While Thri-Kreen do not necessarily value life or virtue any more so than an animal might, they also do really contain any inherit ill-will or evil within them, simply operating as necessary to sustain themselves. Because of this, they largely are relatively neutral in alignment, with their chaotic lifestyles being balanced by mindsets that encourage law, tradition and order.

They are not especially a religious people, but some have been known to adopt the philosophies of some deity or another. The largest population of religious Thri-Kreen worships Bestia, whom they call the Great Hunter, out of respect for her ideals and their own largely coinciding, and a manufactured belief that she grants her followers good luck in hunting, and that her wild lands are a paradise for their people. A slightly smaller amount, usually that of nomads, worship Bycore. Some smaller religious minorities are Tirros, and regionally-specific deities, such as Isis and Alcyone.