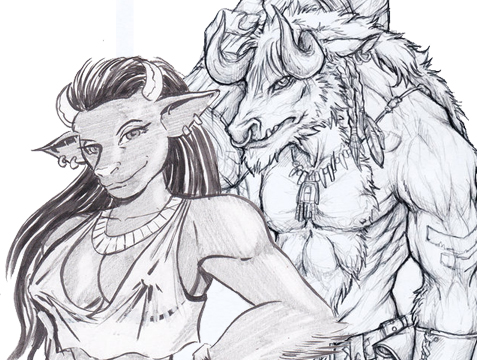 From left to right, a female and a male Kerani, the fullblooded Holstaurus race.

While they've been subject to a wide-range of nicknames, some less flattering than others, the formal name of the species of sapient, humanoid creatures resembling bovine quadrupeds is Holstaurus. This is, however, merely the name kept in official records in most cities and settlements under the question of race. Truthfully, the Holstauri themselves believe that there are actually two different races: The Kerani, or "True Blood" and the Kaori, or "Distant Blood".

Holstauri have many informal names, as well as many clan names, as well, such as the legendary "Minotaur" - in reality, the Minotauri are simply a warrior culture of Kerani tribesmen who follow the teaching of Minot, their ancient leader.

Holstauri, generally from both the progenitor and successor races, are taken with a large level of prejudice in many cities, and provide the same overgeneralized scrutiny to other races, as well. This is specifically because Kerani have warred with human, elven, and other regional powers for centuries, to whom they see as invasive slavers and conquerors; Quite literally, the practice of slave trade regarding Holstauri has only been in decline for a few short decades, though it is still accepted in some regions. Because of this, most of the civil races tend to see the strange, tribal Holstauri for their stature and common status as farmhand slaves in the same hand. Some races, however, see kin in Holstauri, and are likewise welcomed into relations with the native tribes; Races like Fey, Catfolk, and Merfolk, known more for their jovial and carefree nature, are much more likely to befriend Holstauri, as they are motivated by the same, simple rules: A respect for natural environment, and a healthy admiration of the golden rule.

Kerani, specifically, are stoic creatures, while large and muscular. Kerani typically never leave the rule of their tribes, unless a male seeks to become a patriarch of his own clan; This ensures both a sense of loyalty to the tribe and family, but also that the society of most tribes is close-knit and isolationist. While in the presence of outsiders, or when extraordinary circumstances for Kerani to leave their tribal grounds and tread into cities, the Kerani seldom speak. They are used to the intricacies of a language all their own, which involves body language to a much more potent degree. A gesture of the hand may be all they need to return a greeting, which may be received by others, inaccurately and ironically, as a sign of arrogance. Actions and Statements are often bold and simple; Kerani do not believe in saying more than is necessary to those who are not within their traditional society, though this is only the norm, not an absolute. Kerani take personal resentment towards issues of slavery, as their people were, and in some places still are, enslaved by other races many times following wars. When speaking to Kaori, Kerani reserve some gestures of familial bonds for the distant cousins, recognizing that they contain the same blood, even if diluted, though they do not consider Kaori part of their tribes, or even race.

Kaori are much more social than Kerani, in most situations. Smaller than Kerani, and on par with humans in size, if not a little bigger, Kaori are often much less intimidating, and are far less divisive in their speech, as well as speaking common more directly and naturally, allowing for more cooperation and mutual understanding between themselves and non-Holstauri. Kaori receive many of the same racial prejudices of the Kerani, and are also, in some circles, viewed as an inferior species and even enslaved. Typically, Kaori do not resent other races for the slavery, seeking to enjoy much more amicable relationships, though they dislike slavery and have been known to take offense to derogatory comments involving it. They enjoy much more social interactions with the Kerani, though the Kerani believe the Kaori to be a 'tame' version of themselves, corrupted by non-Holstauri influence and their removal from their traditional, tribal grounds. 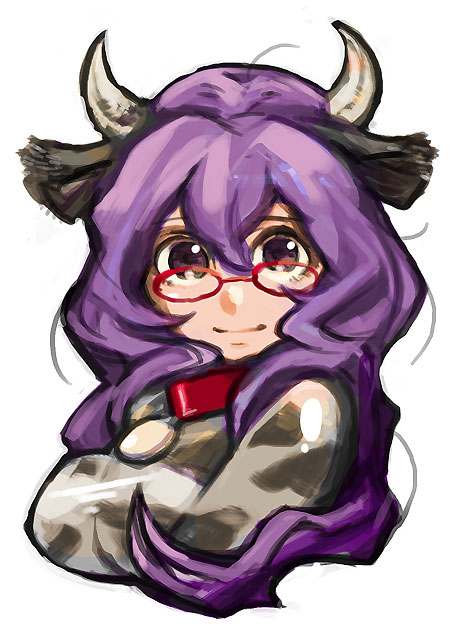 Holstauri stand a fair height above most other races, on rivaled by Dragonkin, Earth Genasi, and other tall races. Living in natural, rugged settings, Kerani tend to be much more muscular and lean, with the brown to black hair that covers most of their body clean and regularly groomed. Kerani are naturally adept at farming, hunting, and are effectively perfect survivalists in the truest sense, lending to their image as the "unspoiled, self-sufficient great beast-men of the plains", as one human author wrote. All Kerani have hooves, cleft into three portions, on their hind legs, allowing them to stand with similar balance as to that of a human. Their hands typically share the same distinction, but are much more identified as a hand with three fingers, large and articulate, with a large 'fingernail' hoof on each finger, though it extends from the finger itself, not only on one side.

Kaori are typically smaller than Kerani, only slightly larger than humans, usually, and shorter than Dragonkin and Earth Genasi. Likewise, they do not share the covering of fur, for the most part, as only their tail is furred. Over 90% of their bodies are typically identical to a large humans, though they traditionally, much to their chagrin, possess much larger profiles and female bust sizes, often leading to undesirable comments. Relics of their Kerani ancestry can be seen in the horns that grow atop their heads, and the tail that extends from their lower backs, as well as their size.

As always, exceptions should be respected from the norm, but typically, Holstauri tend to stray from the evil alignments, electing to be much more neutral or good. The average Kerani is lawful neutral or true neutral, as they are devoted mostly to the interests of the clan, their families, and themselves, and are unconcerned and indifferent about outsiders, though they may seem annoyed in their presence.

Kaori are typically Neutral Good, but can be found in any spectrum of the Good and Neutral alignments, often representing a variety of circumstances in their upbringing.

While most Kerani are not devoutly religious, instead opting to commune with nature as a whole, spiritually, some clans also provide worship for the Aesir known to their people: Somata, Alcyone, and Munsa. Rarely, Tirros might also be revered.

Kaori tend to divide between those who accept the guidance of the Pantheon, like most of the other civilized societies, and those who chose to worship Aesir, like their Kerani ancestors.

As mentioned before, Holstauri are two wildly separate races, in truth; The tribal Kerani and the integrated Kaori.

All Kaori follow the vital statistics of Humans, plus an additional 2d4 in both weight and height calculations.