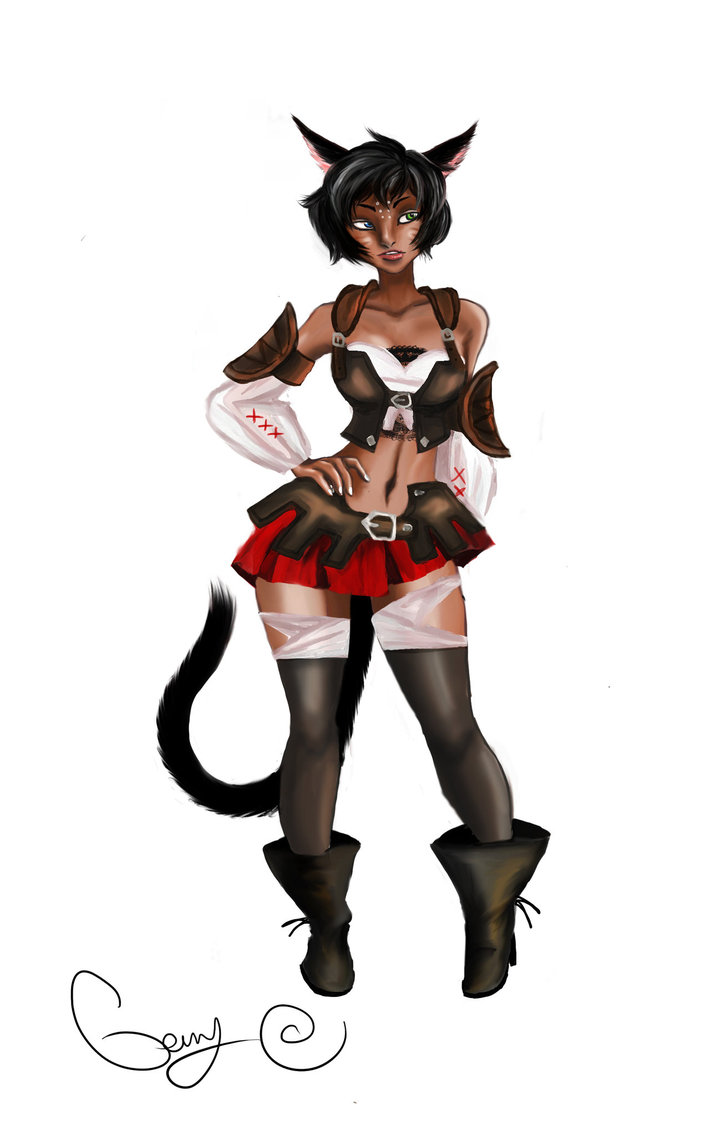 A female Common Catfolk. Common Catfolk are the most numerous and diverse of the Catfolk race, and therefore are often referred to simply as "Catfolk" in short-hand, making them the major representatives of their race. Unlike their cousins, they easily integrate into civilized society.

There is a largely nomadic race of humanoids scattered across the lands of Tirr known as the Catfolk. They are noticeably feline in appearance and temperament, having such features as pointed ears atop their heads, slit-pupils, ever-present sense of balance and fantastic agility, a prehensile tail that moves with a whim of its own, and even distinct tribal markings on their bodies. Some Catfolk, especially among the sub-races, have a coat of fur, which can range from shaggy to fine.

While there are a few differing tribes and sub-races, most Catfolk can be readily assumed to be playful, cheerful, and extremely curious, as well as easily distracted, making them similar to Air Genasi in their aloof mannerisms and personality. The Coug'r, specifically, however, are noticeably lacking in most of these qualities, are extremely territorial and distrustful, and easily are the most aggressive and reclusive of all.

Most Common Catfolk, and more especially Sarli, portray a level of child-like curiosity and wonder of all things, though their actual thought process is slightly more complicated. They are more-so fascinated with seemingly inconsequential things, such as a glinting light, dangling string, or perhaps a waving sheet, than literally being incapable of understanding them. Despite common belief among other races, Catfolk can and do ignore such provoking items on a regular basis, but only when necessary or when they desire to; Most do not have significant qualms with admiring the smallest of wonders when the world around them would ignore such things, and their whimsical nature often only serves to confuse outsiders who would do differently.

Catfolk are generally held in an amicable regard, if not a indifferent one. As largely nomadic tribes, it's uncommon to see Catfolk settled in a city at large, unless they are simply passing through with their accompanying tribe, though small long-term communities are not unheard of. Nevertheless, they often exhibit warm personalities and manage to make friends easily, though some races may dismiss them as too simple or too childish, due to their whimsical demeanor and playful nature. Most Catfolk are fond of pranks, song, dance, and playing, and are usually against doing anything involving effort without relatively near-future rewards.

Sarli and Coug'r tribes are exceptions. Both are derivative races from the main race, which is often distinguished as Common Catfolk.

The Sarli roam the deserts of the Sol region, and are known to be a bizarre, if small, race of Catfolk who regularly steal and mug passers-by. They can attack without warning, if they believe they can overtake a potential target. Fortunately, they are considered a small nuisance, for the most part, and are easily distracted by leaving copper coins on a pathway and their often small, cute appearance often invokes similar feelings that one might have for a mischievous kitten.

Coug'r Tribes are those that live in the mountains of Loupe. They are highly isolation-centric tribes, and do not wander, electing instead to settle the rough mountain ranges, especially prevalent near the mountainous Tirasite-Kerrigan-Indi borders. Rarely, if ever, do they come down from their mountain homes, and they are never welcoming of visitors. 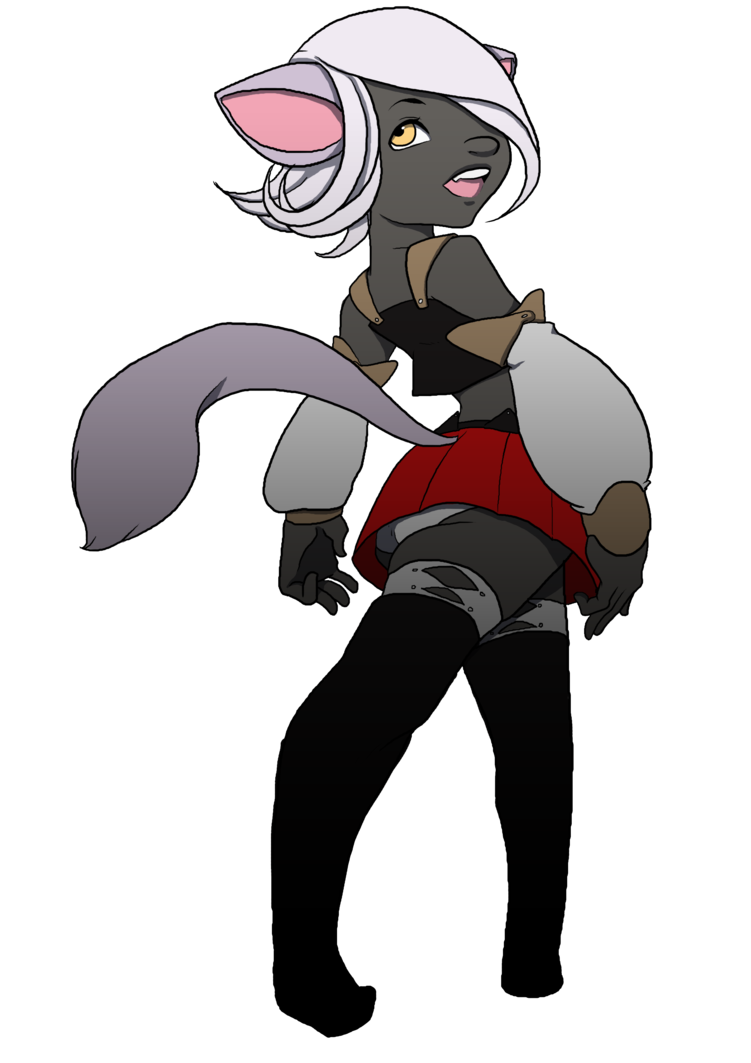 A rare example of a civilized Sarli, a derivative race of Catfolk who live in the desert regions of Sol. Most Sarli are feral and tribalistic, and are met with suspicion and distrust due to their many acts of banditry and thievery.

Common Catfolk are easily seen as human in all ways, except for prominent features that are easily distinguishable: A yellowish tint to the skin, pointed ears upon their heads, and a long tail extending from their lower back. Other features displayed are stripes, slit-pupils, and sharpened claws. Sometimes fur is present on their bodies, but most are fair-skinned.

Sarli, on the other hand, are distinctively different. They are mostly feral, though they can understand some languages and have the capability to learn on a human level. They are short, around the height of a halfling, and have most of the features of the Common Catfolk, except that their body is furred, and colored is black, gray, or sandy-brown, and often has spots, stripes, and other distinctive markings.

Perhaps the easiest to memorize, Coug'r are nothing like their lithe cousins, only sharing the most basic of features: A humanoid shape, ears, tail, and claws. Most Coug'r are of an ashen gray coloring, and have a shaggy layer of fur over their bodies. They are also more burly than their lithe brethren, distinctive among Catfolk, and built from years of mountain life and war. Scars are common, and a snarl is almost always in their voice. Perhaps the most distinctively, their faces are not human-like, but more of that of a big cat.

Typically, Common Catfolk can be of almost any alignment, composing the super-majority of all Catfolk, and thus encompassing many different moral sets and environmental factors. The most common alignment is Chaotic Neutral, but only by a relatively small margin. This is because most Catfolk of this type are rather laid-back, windswept individuals, more interested in appeasing their whimsy than living with a need for order or structure in their daily lives.

Sarli, on the other hand, are usually of the evil alignment, or at least neutral, and almost all Sarli are chaotic in nature. Rarely do Sarli ever seem to vary from these sets, though they do not have much chance to, either, given their circumstances. They are not as universally hated as Orcs or other ostracized races, but they encounter enough opposition that integrating with other societies besides typical Sarli communities is difficult, resulting in a lack of diversity in moral and philosophical ideas.

Coug'r are hardly ever of Good alignment, and mostly stick to the Neutral and Lawful disposition, though some tribes do exhibit Chaotic tendencies. This is represented in their society as a strict adherence to their traditional laws and authorities, often observed at peril by intruding outsiders. Ritualistic and Isolationist, Coug'r try not to concern themselves with the cityfolk and plainsfolk, though they are not against ambushing a caravan or two for their own gain. 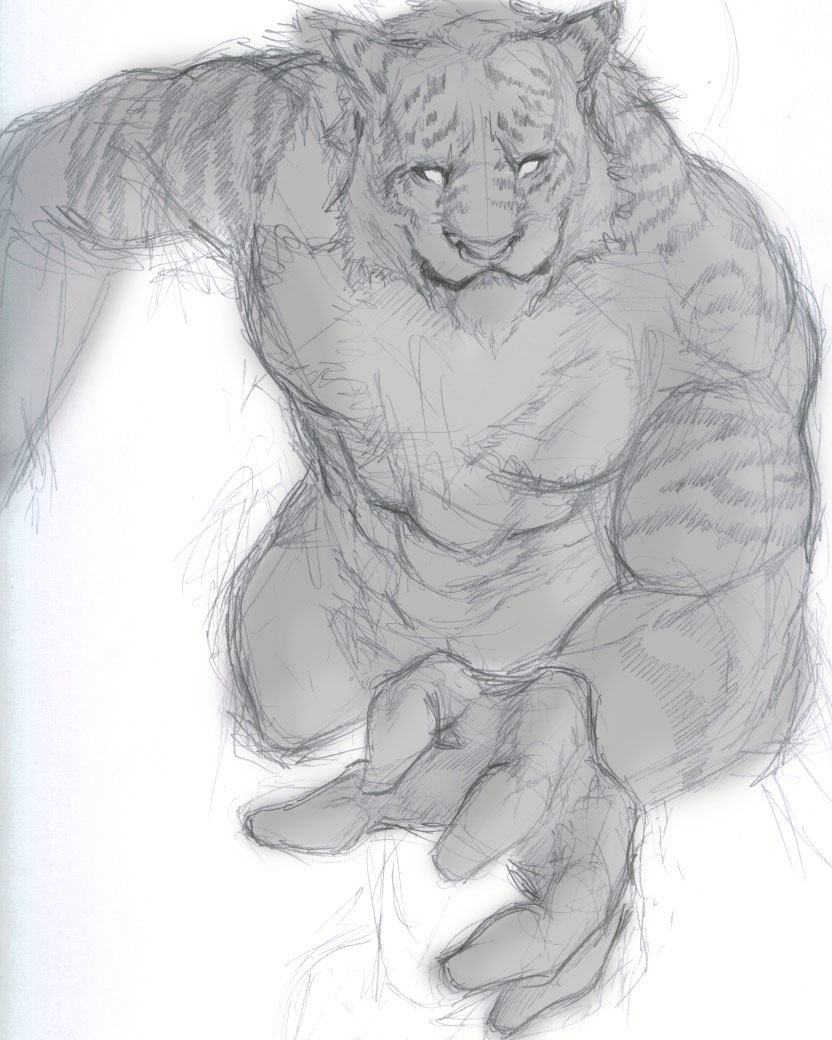 The powerful Coug'r are a fierce and isolated race, usually found in tribal units in the mountains of Loupe. A naturally psionic race, they guard their secrets harshly and are fiercely territorial.

Religion is something that hardly ever is shared between individual Catfolk, since their views are often very different, and each may think that a different deity represents their ideals more than another. In the case of Common Catfolk, they often worship deities that are at least tolerant of other worshipers, given their easy-going personalities and nomadic nature, which exposes them to many different walks of life.

There are a few common deities that the Common Catfolk would find appealing; A hunter or forager for his clan would likely praise Bestia, while the fun-loving and forever-young would follow the ideals of Jubila. The more romantic or promiscuous would favor Era, while those who find themselves moving from place to place might pray to Bycore for safe journey. Oddly enough, even Undine garners some worshipers among the Catfolk, though a common jest is that the intentions of said worshipers are focused solely on the thought of fish.

Sarli typically worship what they call the sand-mother; Scholars who have studied and lived among the Sarli have raised a number of postulates, but most agree that this is just a name that is used to refer to Isis, who created the region of Sol by thrashing her titanic coils against the earthen plains, and thereafter protected and offered shelter to those who came. Isis rarely grants any divine powers to Sarli petitioners, however, as they rarely truly manage to follow her ideals. Small sects devoted to Bestia exist, though they often fight with the greater majority. Some other races have theorized that the Sarli might be a product of Macha's corruptions.

Coug'r are of special note, as they widely consider Feylgara as their deity, though few variations exist. Other minorities might worship Tirros, the God of Territory, and Bestia, the Goddess of the Hunt.