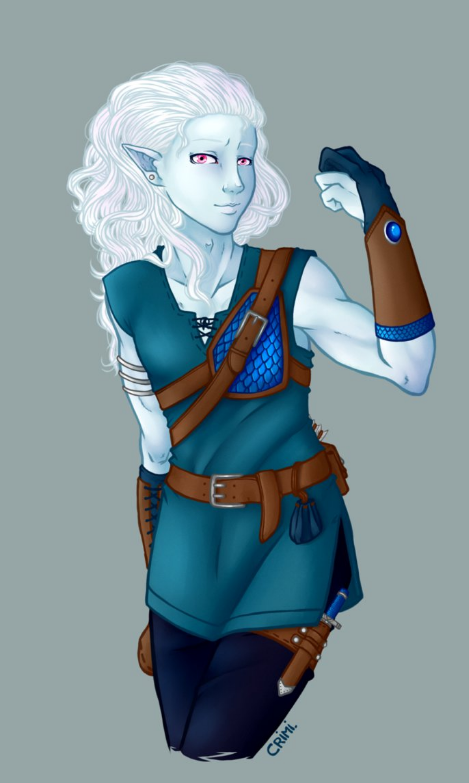 A male Air Genasi, showing signs of his heritage. Note the white, flowing hair and skin the color of the sky.

The elemental planes are host to powerful creatures, and many of the Aesir who were banished to Tirr took up residence there, especially those who had powerful connections and relations to those elements. This allowed their power to be amplified, somewhat, enabling them to avoid the forced slumber that so many other Aesir were forced into, with no planes able to bolster their power outside the deific sphere. The time spent in these planes, like the history of the Dragonkin, eventually ended up spawning and evolving races beyond themselves, such as the Efreeti and the Djinni. These races, over time, co-mingled with the mortal races of Tirr, creating half-breeds of elementals, called Genasi.

Genasi are often defined by their elemental heritage in matters of personality; Fire Genasi are hot-tempered and aggressive, while Water Genasi are passive and calm. Air Genasi tend to be cheerful and free, carried entirely by whim, and Earth Genasi are resolute and stoic. The varied elements represented by this race are often most accepted in cultures that revere them. Water Genasi get along well with Merfolk, and Earth Genasi are friends to most dwarves. Fire Genasi often find mixed friends in Dragonkin and Humans, while Air Genasi easily get along with many races, except for dwarves, considering them sticks in the mud.

Like all things Genasi, matters of physical description and political and moral dispositions are heavily influenced by their elemental ancestry. In terms of physical appearance, most Genasi maintain a few general aspects that are common for their race, such as a general humanoid form with little to no differentiation from a human or elf. Alignment is typically diverse, with common themes of chaotic aptitudes in all the varieties.

Fire Genasi often have red, or orange hued skin. Hair can be anything between black, red, orange or yellow, and even can take on an ash color, on occasion. Eyes often appear to be red or bright yellow, and the Genasi often smells of smoke, and is significantly warmer to the touch than most humanoids, while not actually being on fire. On occasion, some Fire Genasi have body temperatures that are above average, and the skin becomes a hardened, charred shell as a result, often resulting in fractured portions of skin, with hot skin showing beneath. Fire Genasi tend to worship Vok, the Aesirean god of fire.

Water genasi are similar to merfolk in their skin colors, often a blue or pale white, while their hair often takes on wavy hues of royal blue, though it can span the entire spectrum of blue, resulting in turquoise or cyan. Eyes often appear to be listless, even when focused or attentive, as if they are simply at peace with the flow of events around them, even if actively involved. Skin is often damp or wet to the touch, though not enough to truly cause any inconvenience. Water Genasi often worship Undine, Aesirean goddess of water, and sometimes Munsa, the Aesirean goddess of rain.

Air Genasi typically have no truly different skin coloring, though often times it feels incredibly smooth, and they themselves are actually fairly light, often barely growing beyond 100lbs. Their hair doesn't often respect any true color hue, but a common color is white or light blonde, and it is almost always naturally feathered; It always appears to blow in the wind, even though sometimes there is no wind, though this attributed to Air Genasi hairs having fairly little mass, and therefore weighing next to nothing. Always searching for something to sate their need for freedom, Air Genasi are generally nomadic, and rarely stay in one spot too long. They also have terrible records of getting in trouble with the law of lands, due to their free-spirited and carefree nature. Most Air Genasi worship Somata, the goddess of the wind and climate. Some also worship Fir, the god of storms and cold, and others may worship Munsa, alongside Water Genasi, as the goddess of rains and cyclones.

Earth Genasi are by far the most imposing of all Genasi. They are generally taller than most humans, often on par with Dragonkin in both height and mass. Their bodies are often covered in what appear to be small patches of crystalline or stone-like calluses, often hard and rough to the touch, and usually in rather different hue than the normal body color, which is generally between brown and peach colors, often leaning towards more earthen hues. Most Earth Genasi generally cut their hair short or entirely shave it, but the most common color is green, the cause of a common racial slur, "Shrub". This slur is often cut short by the sounds of two giant fists hurling towards the offender. Earth Genasi tend to be silent and compliant, however, which helps them maintain a place in society despite their intimidating status. This does not mean they are without wills of their own, however, and they will express and maintain opinions when it comes up. They simply remain quiet and stoic unless any need arises for the contrary, causing them to not be outgoing, at all. Most Earth Genasi worship either Tirros, Pantheon god of the earth and territory, or Feylgara, Aesirean goddess of Stone and Sleep. 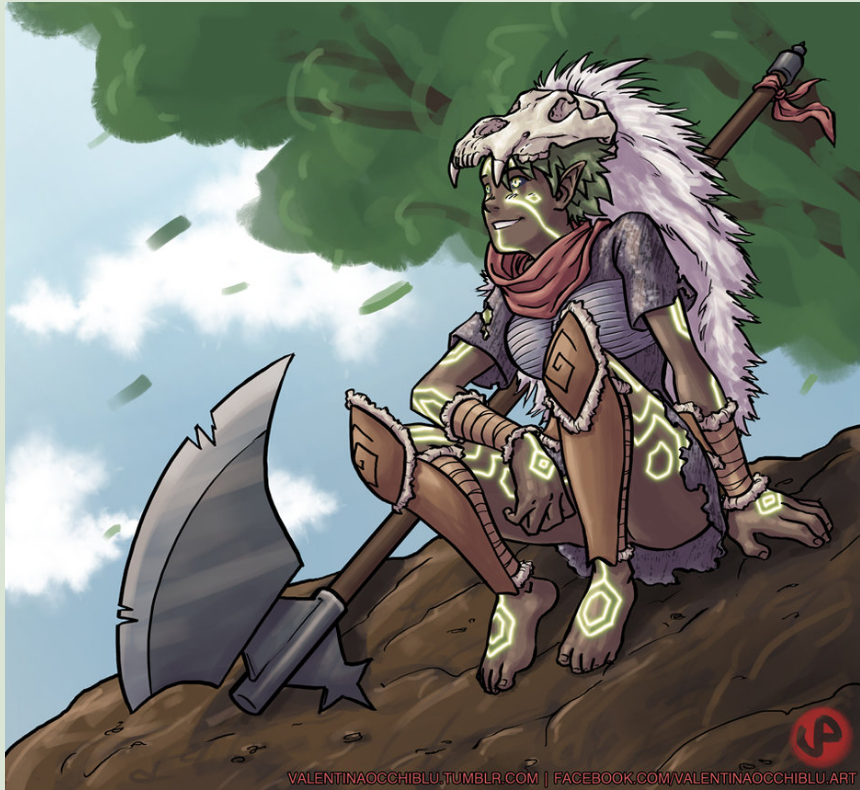 Since Genasi vary from element to element, there's hardly any way to assume uniformity for the race. Fortunately, however, they tend to mimic other races in most of their statistics. Fire Genasi's statistics use the Human statistics. Water Genasi use Merfolk statistics. Air Genasi use Catfolk Statistics. Earth Genasi use Dragonkin statistics.