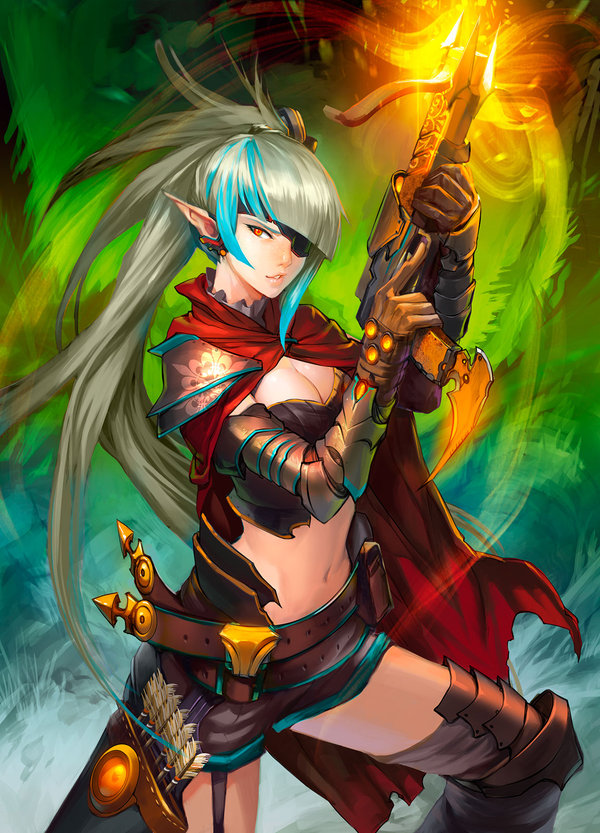 Bestia, the Elven Goddess of Nature and Sport. Her domain comprises all beasts that roam the earth, and she constantly searches for suitable prey.

While it is true that many of the Aesir bear regret and grudges against their fate, even if minimally, after the exile was enacted by the Pantheon, some deities, like Mana, found no real qualm with the exile. Bestia, Goddess of the Hunt and of Beasts, was one of the latter, as she found the newfound freedom as a means to practice her ideal in a grand new world, ripe with game and potential. It also helps that her ideal, Sport, is something practiced by all manner of sentient creatures in Tirr, which provides her with a large amount of ideals which allow her to maintain her divinity with minimal slumber.

The form most native to the Goddess of the Hunt is that of an Elf, often clad in Leather or a small mantle. She almost always is depicted as carrying a ranged weapon, often a Longbow or Light Crossbow, though in few cases has also been seen wielding a spear from atop a mount. Unlike most Aesir, she is less likely to be seen and reported by mortal eyes, as she is reclusive and isolationist in her tendencies, and when someone does spot her, it is only by grace... or something worse, that allows them to live to tell the tale.

While she, herself, is not evil, she does not necessarily view life as sacred; On the contrary, her ideal demands that she view life with respect, but to seek out challenging game, wherever she might find it. This had led to quite a few grim legends about her, often centering around the use of live mortals, whom are spirited away and used as her prey within her sacred hunting grounds. Many legends suggest that she also is the progenitor of were-creatures, having grown tired of her prey and wanting to seek new possibilities in her hunt, even to the point to create anew. The truth of this matter is unknown to the common folk of the world of Tirr, with even some groups decrying it as blasphemous: A Goddess of Nature would not change nature to satisfy their ideal, they say!

The ideal of Bestia is a simple one, and while it would appear on the surface to quite evident, she uniquely enjoys quite a few different interpretations of her demanding dogma, which is due partly to the fact the hardly ever comes forward to set the record straight. Put simply, the true ideal of Bestia is Sport, as in, the hunting of other creatures for game. While there are parallels between this dogma and Tiamat's ideal of Domination, Bestia practices the hunt exclusively for the challenge; a need to adhere to and admire the physical laws of nature, but also the cycle of life. In this, those who follow Bestia typically leave no waste in whatever endeavor they do, especially in hunting for sport: Every part of the beast is used and applied to life, elsewhere.

Many sects of Bestia believe in, and aspire to join the Great Hunt, a time when Bestia sweeps chosen mortals away towards her realm within the astral plane, the Wild Lands, and hosts a great hunt among legendary creatures of great might and power. Those who hunt do so for trophies, as well as sustenance, as there is no civilization in the Wild Lands. At the end of the Great Hunt, it is believed that those who have survived come together to feast on their kills, as well as to skin and set their trophies, and to exchange stories, and honor the dead, both man and beast, before returning home with their goddess' blessing.

Some sects of Bestia believe that she is the progenitor of the various were-creatures around the world of Tirr, and many of the sentient members of said races worship her as a creator-god, though they also adopt other dogmas and participate in much the same rituals that more mainstream sects do, such as participating in the Great Hunt, as well as organizing their own sacred hunts.

Given the divergent beliefs of her various cults, Bestia has quite a few temples that would consider themselves the mainstay of her worship; In particular, the greatest in scale and worship is the Sanctuary in the region of Indus (3.5e Environment), which is a grove deep within the Forever Forest. Those who manage to actually find their way to the grove are blessed by the deity to allow them to find their way out, but the peaceful nature of the area is usually quite comfortable for those who arrive. The grove belies an incredible size, despite being an otherwise small area within the forest, and many followers of Bestia are often found congregating here, camping by night and hunting by day, with a large shrine to their deity as the only shelter around, made of pure white marble, and covered in natural vines from the vegetation nearby.

There is also the Sacellum, which is a secret location in the Kerrigan region, where the various were-creatures who worship Bestia gather. Because most civilization shuns them, and more than a few organizations actively hunt them, werecreatures generally limit membership for reasons that are not so hard to figure out. Only by being brought by another, in referendum, can one be allowed into the Sacellum.

Unsurprisingly, Tiamat finds herself unable to completely dislike Bestia, if only because their ideals often overlap and align, even if their beliefs are completely different. Still, the Elven Goddess still takes followers in her care, and generally seems to assist them, even if reluctantly, and she also doesn't command them to hunt others of their kind, weaker or not (though some more extreme sects do). Serberus is similar, though he outright hates Bestia, simply because she doesn't invoke his ideal of Destruction.

Tirros, Vanguard, and Mara tend to view Bestia as a rather chaotic deity, and with disdain because she shuns the structure of civilization and law for a more primal nature, one that is cruel and unforgiving, no matter how much she respects her kills or teaches her followers to do so.

Era and Mana often consort with Bestia, with Era finding kinship in a fellow deity who abides a primal nature, although Bestia's ideal and nature are far different from her own; This has never stopped Era from attempting to pursue romantic interests with her, or anyone, for that matter. Mana tends to view Bestia with the pragmatic nature as she does every deity, and as such plays the roles of the correspondent and meddler in their relations.