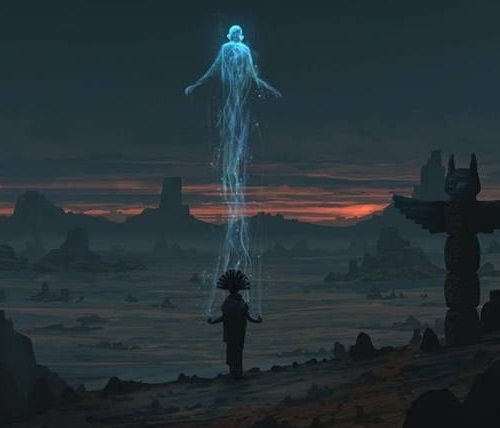 A Soulmelder manifesting one of their melds.

Soulmelders are powerful magic users who are able to alter reality with power drawn from the spirit realm.

Soulmelders are able to call on healing magic, and reality altering magic to bolster their allies in battle, but lack in any sort of offensive abilities themselves and instead rely on their Soulmelds to deal damage in combat.

All of the following are class features of the Soulmelder.

Weapon and Armor Proficiency: A Soulmelder is proficient with all simple weapons but no armor or shields as they interfere with somatic motions.

Soulmeld: A Soulmelder's primary ability is the ability they have to fuse their soul with the soul of another creature. A creature a soulmelder has melded with will "evolve" as the soulmelder levels up, a melded creature gains the same benefits as a Druid's Animal Companion. To meld with a creature the Soulmelder and the target creature must make an opposing Soulmeld check. If the results are 5-15 you use your base DC or the target's base DC. If you roll above or below this add or subtract the amount you are off by from your base DC to a maximum of +5 or -5.
Your Base soulmeld DC is equal to 10+Soulmelder level+Charisma modifier
The soulmeld DC for another creature is 10+2xCR with the exception of creatures with CR 1/2 and 1/3 which have a base DC of 9 and creatures from CR 1/4 down to 1/10 have a base DC of 7
At character creation you may select any creature from the Monster manual to attempt to meld with assuming it would be reasonable for you to have encountered a creature of that type before (DM's discretion). Treat the creature you are attempting to meld with as unsuspecting (use the base soulmeld DC). Any creature you successfully meld with advances with you, your level is equal to your soulmelder level plus your Charisma modifier to a maximum of +3, a creatures level equals to twice their CR, any creature below CR1 is treated as one level lower than 1, and creature of CR 1/4 or less is treated as two levels lower than 1. If you manage to successfully meld with a creature who's level surpasses yours treat it as the same level as you for advancing purposes. If you are unsuccessful on your initial soulmeld check you may either, attempt to meld with a creature who has a lower DC, or if it was as a result of being too greedy may have to start play with no initial meld and have to find one in the wild.
-Other factors to also take into account include the animals attitude towards you, Hostile +3DC, Neutral/Unsuspecting no change, Friendly -2DC.
-If a hostile creature is unconcious -2DC however an unsuspecting or friendly creature are unaffected by this.
-If the creature has an intelligence score higher than 2 add +5 to the DC to meld with the creature.
-At levels 6, 12, and 18 the soulmelder gains Soul Expansion allowing them to meld with one additional creature each time, each additional empty slot raises your base DC by 2, and each creature you have melded with lowers your base DC by 2.
-When attempting to soulmeld with a creature you provoke an attack of opportunity, if you fail the soulmeld check with a hostile or unsuspecting creature the targeted creature may make a touch attack dealing double damage (This can be halved on a successful Fortitude save).
-At any time a Soulmelder can choose to part with a soul that is currently melded with them, doing so requires them to undergo a 24 hour cleansing ritual, at the end of this ritual the Soulmelder and the chosen soul will be parted and the Soulmelder takes 2 points of temporary consitution damage which regenerate after an additional 24 hours.
-Regularly when you meld with a creature it will be of equal or lower level than you a creatures "level" is equal to double the CR of the creature. If the creature you are melding with is intelligent (Int score of 3 or higher) and has an opposing alignment you and the creature must make an opposing will save, if your will save exceeds the creatures will save by 5 or more the creatures alignment is changed to match yours, if they are the same +/-4 both of your alignments remain unchanged, and if your will save falls short by 5 or more points your alignment changes to that of the creature you're melding with.
-If a creature you are melded with is reduced to 0 hit points or lower it's soul seperates from you as if you had just performed the cleansing ritual to.

Free Soul: At will a Soulmelder can use the ability Free Soul to allow a physical manifestation of the souls they have melded with to exist on the material plane, at 10th level this ability is enhanced so that the soulmelder can have an additional physical manifestation active at once and is further enhanced at 20th level so three manifestations can exist at once. If the creature manifesting is equal to or above the soulmelder's level they use the base stats for that creature unmodified, if your level surpasses the level of the creature you have melded with the manifestation of that creature will be modified according to the Table: The Druid's Animal Companion

Spells: A Soulmelder can cast any spell he knows without preparing it ahead of time, the way a wizard or a cleric must. To learn or cast a spell, a sorcerer must have a Charisma score equal to at least 10 + the spell level. The Difficulty Class for a saving throw against a soulmelder’s spell is 10 + the spell level + the soulmelder’s Charisma modifier.
Like other spellcasters, a soulmelder can cast only a certain number of spells of each spell level per day. In addition, they receive bonus spells per day if they has a high Charisma score.
Unlike a wizard or a cleric, a soulmelder need not prepare his spells in advance. They can cast any spell they knows at any time, assuming they have not yet used up his spells per day for that spell level. They do not have to decide ahead of time which spells they’ll cast. Soulmelders choose their spells from the following list:

Animal Companion Basics: Use the base statistics for a creature of the companion’s kind, but make the following changes.

Class Level: The character’s druid level. The druid’s class levels stack with levels of any other classes that are entitled to an animal companion for the purpose of determining the companion’s abilities and the alternative lists available to the character.

Str/Dex Adj.: Add this value to the animal companion’s Strength and Dexterity scores.

Bonus Tricks: The value given in this column is the total number of “bonus” tricks that the animal knows in addition to any that the druid might choose to teach it (see the Handle Animal skill). These bonus tricks don’t require any training time or Handle Animal checks, and they don’t count against the normal limit of tricks known by the animal. The druid selects these bonus tricks, and once selected, they can’t be changed.

Share Spells (Ex): At the druid’s option, she may have any spell (but not any spell-like ability) she casts upon herself also affect her animal companion. The animal companion must be within 5 feet of her at the time of casting to receive the benefit. If the spell or effect has a duration other than instantaneous, it stops affecting the animal companion if the companion moves farther than 5 feet away and will not affect the animal again, even if it returns to the druid before the duration expires.

Evasion (Ex): If an animal companion is subjected to an attack that normally allows a Reflex saving throw for half damage, it takes no damage if it makes a successful saving throw.

Devotion (Ex): An animal companion gains a +4 morale bonus on Will saves against enchantment spells and effects.

Alternative Animal Companions: A druid of sufficiently high level can select her animal companion from one of the following lists, applying the indicated adjustment to the druid’s level (in parentheses) for purposes of determining the companion’s characteristics and special abilities.