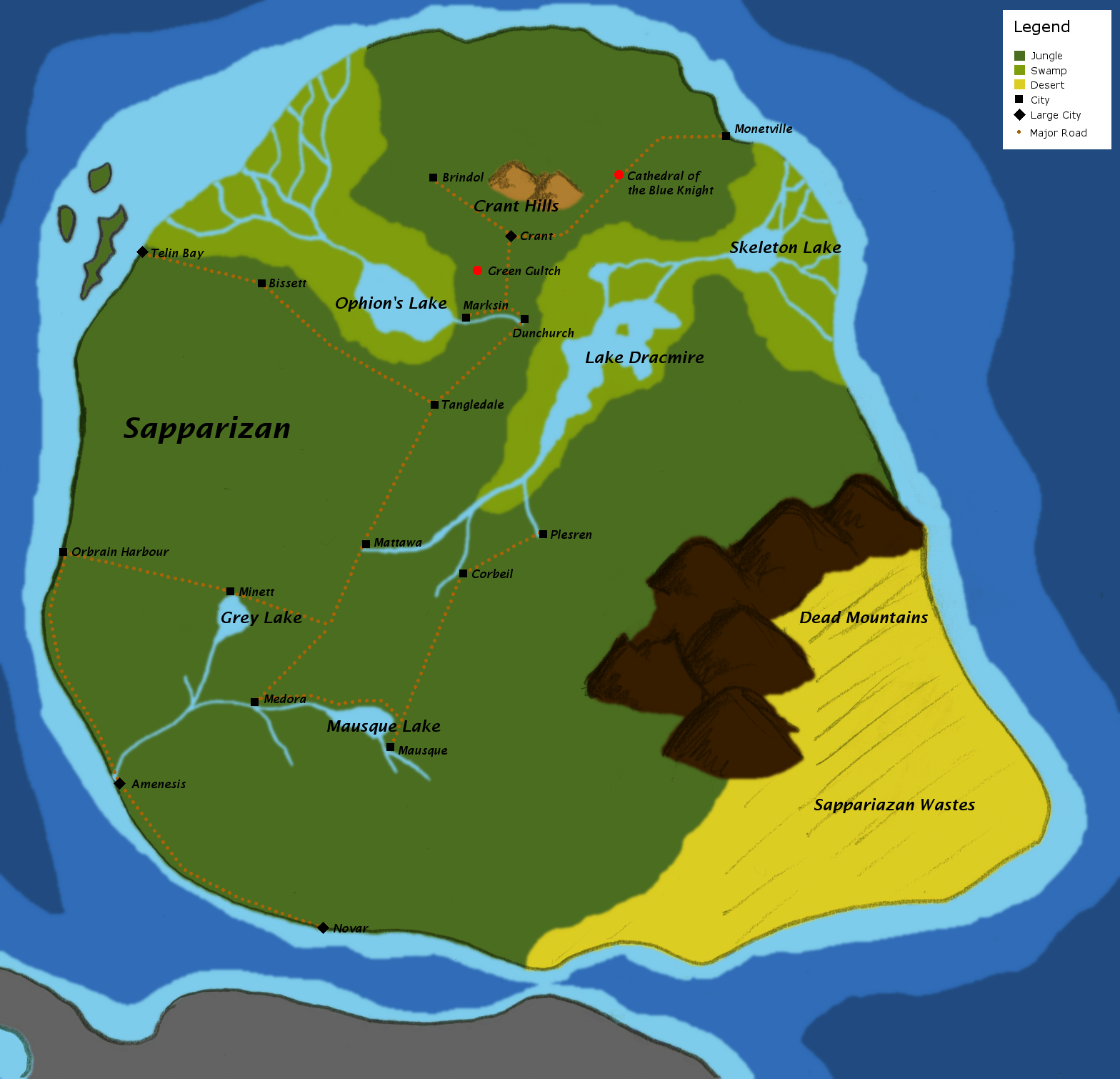 Sapparizan is home to many different races. The following races (besides those found in settlements) have tribes present in Sapparizan:

The standard lizardfolk have a long history in Sapparizan, but a short one as free tribes. Before Ophion became their empress, the lizardfolk were divided into three distinct nations. Most of the standard lizardfolk were part of the Ixian nation, but there were also many in the Mazayatec nation (which was chiefly composed of the blackscale lizardfolk). Each nation worshiped many similar gods and built stone monuments to honor them. When Ophion came to Sapparizan, she was recognized by the lizardfolk peoples to be the great green winged lizard Quetzalcoatl. All three nations were dissolved and they became unified, serving her as their goddess.

After Ophion abandoned the lizardfolk, they became unclear on their religion and direction in the world. Generally, they split up into tribes that revered shamans. Instead of religion, the lizardfolk became interested in identity. Most of their time is spent in learning about their lands and what it truly means to be a native to Sapparizan.

The poison dusk lizardfolk belonged to the Incaya nation before the arrival of Ophion. After the dissolve of Ophion's empire, they scattered into small tribes, many of which patrol the bogs of Sapparizan on foot and by boat. Often they are found living on boats in a community of at least one hundred poison dusk. These nomadic groups pass through the swamps and rivers of Sapparizan and occasionally pirate the coasts.

The jungle gnomes of Sapparizan have only recently become an organized race. Beforehand they were considered a type of ape due to their primitive nature. It is rumored that a lizardfolk Bog Queen took pity on the primitive gnomes and taught a tribe of them the secrets of her people. In return, she demanded tribute of treasures found in the jungles. Though this story may not be true, it certainly has some merit since one day, the jungle gnomes seemed to have their own social system in place almost overnight. Now they are often found in small tribes traveling by boat through the jungles. They all seem to be part of a larger empire and there is even reputed to be a capital city which is a central hub to their people.

This cruel race inhabits the ruins of elf settlements in the Dead Mountains. The hobgoblins of Sapparizan are well organized and defend the mountains from other races so that they can be the sole harvesters of the rich metal veins. They often enslave other less developed races such as goblins, orcs, and even stone giants. Most hobgoblins in Sapparizan follow Hextor, ever since a cult of Hextor worshiping clerics came and converted them. Hextor's rule by an Iron Fist has influenced the hobgoblin leaders, which explains their strong leadership and organization.

Most goblins in Sapparizan fall into one of two categories:

Goblins have a reputation in Sapparizan for meddling with arcane magic that they do not control or understand. In the depths of the Dead Mountains lie evils and powers beyond the realm of mortals. The goblins, living in these realms, often gain access to these forces and the ones that survive come back powerful, but twisted. These goblins lead other goblins out of the mountains and raid civilizations.

The orcs of Sapparizan are often slaves to the hobgoblins, but some tribes exist. Much like the goblins, some orcs delve deep into the darkness of the Dead Mountains and return infused with powerful arcane powers. These orcs become shamans and often leaders of tribes. The general orc rule of biggest is best still often applies, however, and Barbarian leaders will take ogres and trolls as bodyguards and have shamans as advisers.

A particularly foul group of orcs called the Black Sun Orcs inhabits the southern portion of the Dead Mountains near where the vegetation becomes sparse and the Sapparizan Wastes begins. This group commands many smaller tribes of goblins, trolls, ogres, hill giants, and bugbears. Their leader is a powerful shaman that has survived many contests against his power.

4900 PCE Before the Lothadian Empire colonized Sapparizan and when they were ruled by the Thestlian Mageocracy, they traded with a group of elves that had a settlement in the Dead Mountains. The elves were very efficient miners and traded raw minerals for various resources produced by the Thestlians such as wool, grains, and smoked meats.

This trade relationship was very strong and soon the elves and Thestlians became strong allies, fighting a few small wars against the Cordinians, Sernish, the Barbarian Tribes, and occasional attacks against the elves by lizardfolk.

5008 PCE The high mage leader Estritius Magifi married the elven princess Eámanë Meneldur, and their son Garm Magifi became the half-elf ruler of the Thestlian Magocracy. This union of nations explained the Thestlian reaction to what was about to happen.

5029 PCE The great green dragon Ophion attacked and destroyed the entire elvish kingdom in the Dead Mountains of Sapparizan. The peaceful elves were wiped out from the face of the planet and only ruins of their cities and mines exist now.

5030 PCE The Thestlians under the rule of high mage Garm sent their army to Sapparizan in order to destroy Ophion and her lizardfolk settlements. After several small skirmishes, Ophion herself came to meet with Garm. They decided to have a contest between Ophion and a great hero known as the Blue Knight. Ophion lost the battle and as part of the arrangement left the Thestlian empire in peace to control Sapparizan.

For the next 160 years many settlers set up settlements across Sapparizan, destroying lizardfolk settlements they came across. Eventually the Thestlian army was sent back to Thestla as the lizardfolk tribes were scattered and weak. Settlers never settled the Dead Mountains as legends arose of elvish ghosts and bad spirits there.

5213 PCE The Lothadians draw out their imperial armies from Sapparizan leaving only a single legion to maintain law (in addition to local authority).

5214 PCE Ophion true to her word has left the Thestlians alone in Sapparizan. She joins an existing army of goblinoids assembling in the Dead Mountains and in the name of Tiamat begins her reclamation of Sapparizan now that the Lothadians control it...

The following tales are folk stories told by commoners in Sapparizan about their history.