Oncia sits on the southern shores of the Nereid Sea, with its ally Carraway to the west, and its implacable enemy the Alabastrian Empire to the east. To the south, both the Caliphate and Chisel have scores to settle with Oncia.

Oncia is hilly country spotted with vegetable farms and orchards. The seaside contains numerous fishing communities, as well as white salt beaches where the residents can gather salt for resale across Patronage.

Along the river that cuts through the eastern parts of the kingdom, are Fuin and Ker. These cities date back to the period when the Alabastrian Empire governed this region. Fuin is located in the plains and is mostly farm land. For this reason, it is considered a center for smugglers, which Oncia either encourages or ignores. Ker, however, is a small city that survives on river trade of Oncia and also some farming. It is known, however, for the nests of griffins and hippogriffs that migrate there regularly. Horses are not considered safe in the vicinity and by necessity, Hippogryph has become known as a location to acquire all manner of exotic steeds. 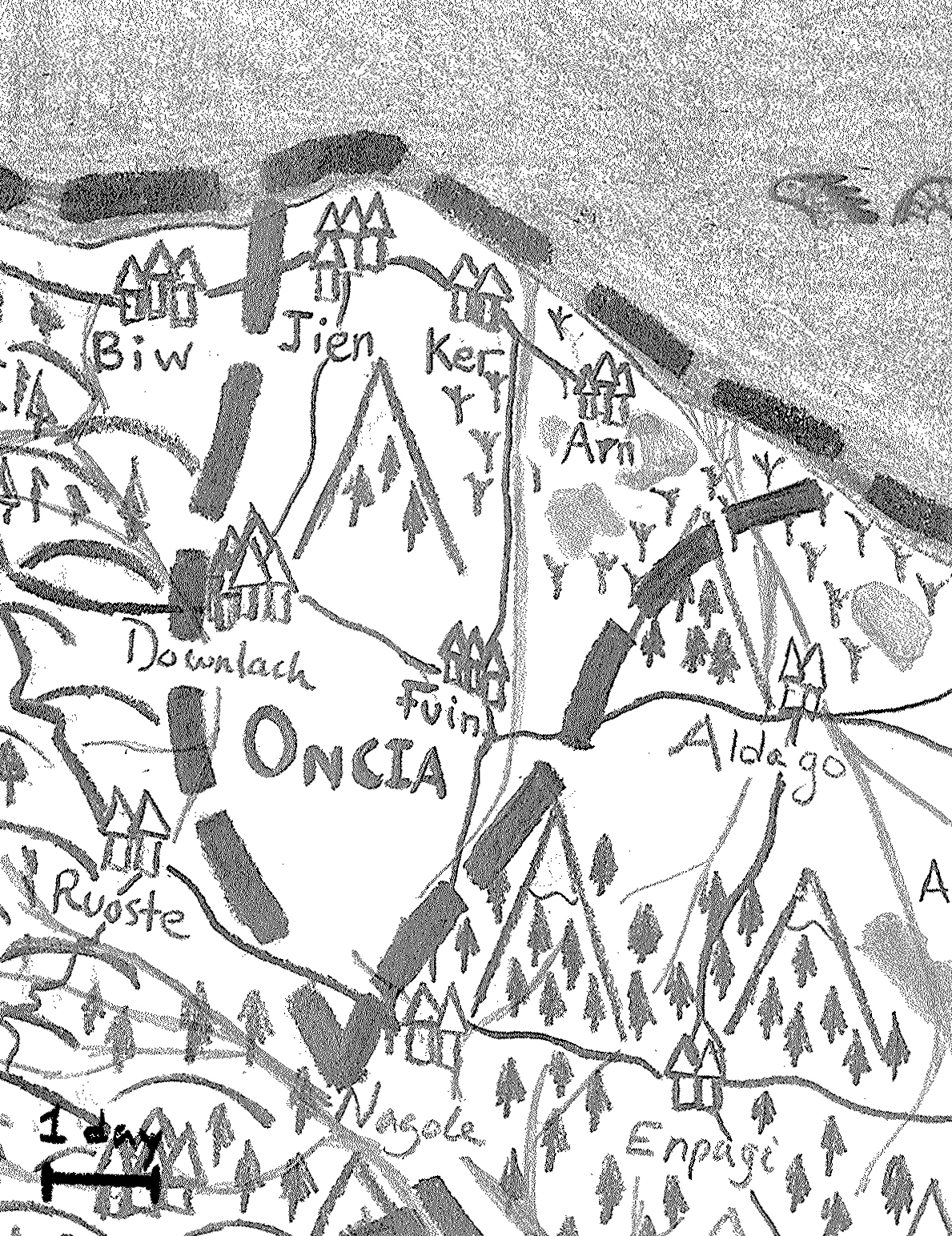 Oncia. The map's scale is based on the average medium race's walking speed.

Oncia founded and runs Oncia alone. She has lesser nobles and magistrates to govern the provinces she sets forth throughout her domain, but her word and her word alone is law. She has made no provision for her succession, and her death would likely spell anarchy and war as her neighbors clamber to divide her territories.

Under Oncia's tutelage, her eponymous kingdom is a repository of culture and learning. She tries to govern under the principles of nobility and chivalry first taught by Juzhian, the one-time Emperor of Alabastria. However, such nobler pursuits appear to be against her true nature. Oncia is a scrapper by experience, often on the run, with enemies at every side. She is shrewd and calculating and manipulative and that culture, too, has pervaded her kingdom. Oncians can be polite and mannered to strangers, but there are daggers behind every back, and Oncians do not hesitate to take avdantage of a weakness presented to them.

Oncia was once the second in command of the Alabastrian Empire. She was one of a handful of deva the Avatars trusted with the Ritual of Remembrance. She was the most trusted lieutenant of the first Empress, Xalia. After a brief falling out, she was also the second in command to Emperor Juzhian, and entrusted with the eastern half of the Empire. When Xarlem killed and succeeded Juzhian, he saw Oncia as a threat. When the Caliphate's armies surrounded her, he refused to sen Imperial troops to relieve her. When Loyalist assassins tried to invoke the Ritual of Decadence upon her, Xarlem sent no aid. Each time she survived with only her wits and her formidable magical powers.

Three centuries after Xarlem acceded to the throne, Oncia had given him no reason to doubt her loyalty to the Empire. Although some had approached her about overthrowing Xarlem, she refused to consider treason, and often had the plotters arrested and executed. But Xarlem's paranoia would not be sated.

Finally, when Gamaliel's armies overran Downlach, Xarlem sent no aid to her again. She managed to escape in hiding with the aid of the halfling queen. For a hundred years, Oncia remained in hiding, fleeing from the Caliphate, from Emperor Xarlem's assassins, and from the Loyalists. Over this time, she made contacts and allies in the Order of the Compass, the Testament and among the shedim and ravin.

When she was ready, her plan was executed flawlessly. She and her allies reconquered Downlach and all six of the Lucindan Cities. She executed a simultaneous war against the Caliphate and Alabastria that left both of them unprepared and reeling. In her wake, the nations of Oncia and Carraway were formed. 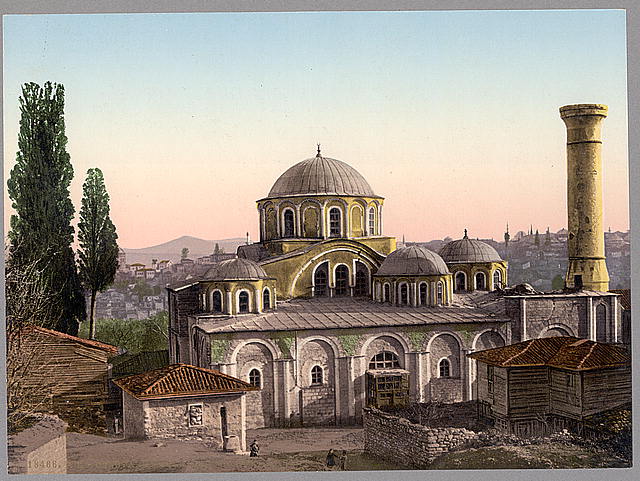 A view of Downlach from one of its many estates.

Remarkably, Oncia managed to convince Alabastria and the Caliphate that the other party was responsible, causing them to go to wat with one another and leave the nascent kingdoms to their own devise. After that resolved, the Caliphate was too busy with Ironguard and Alabastria too busy with Duat (thanks, no doubt to Oncia's machinations) to deal with the renegade nations for almost two centuries.

When Ironguard fell to civil war, the Caliphate could finally turn its attention to Oncia. General Gamaliel besieged Downlach for six years without success. These were hard times in Downlach, and many believed the Immortal Queen finally had no place to run. But then just as suddenly Ironguard Warlord Temur attacked Sarrun, forcing Gamaliel to break the siege to save his brother Muhajiel. Oncia was saved once more (and many speculate what Oncia offered Temur in return for his bold invasion).

Forty years later, Temur's strength begins to wane, and Gamaliel returns to besiege Downlach once more. The siege lasts five years, until the Dragonseye War begins. Gamaliel leaves Downlach, but maintains a sufficient force to continue to starve the Oncians into submission. Despite a solid blockade around the capital, Queen Oncia somehow manages to appear with her retinue on the battlefield at Downlach, just as, so the rumors say, the Nereid Sea begins to boil and flood. When negotiations occur with the young human Rickard, she takes a hand in those negotiations, securing an end to the siege of Downlach as part of the uneasy peace. Oncia appears to be one of the few allies that Dragonseye has. However, all Oncia seems to have done is buy her own vulnerable nation a little more time. Alabastria and/or the Caliphate could invade at any time. Chiseli assassins of the Loyalists still wish to end her immortal life. And her kingdom has become worn and weary from siege after siege. The future of her kingdom appears dim.