Much of the Caliphate consists of rolling fertile plains dotted with the occasional temperate forest, clear spring lake or river, and soft rolling hillsides. The terrain is ideal for agriculture, and the Caliphate is an abundant supplier of grains. The southern forest is higher then the surrounding terrain and gets extremely cold and snowy in winter. In other areas winter is not as harsh. Rivers which start in the southern forest first flow north to the rivers which flow through the plains then south to the Savage Sound. Rivers more to the north flow north through Dragonseye into the Nereid Sea. The Caliphate has several natural borders that afford it some protection. To the south is the Savage Sound which, despite being plied by pirates and brigands and offering ravaging winds, is usually a secure border. To the west is the treacherous Blackscale Swamp, its sparti residents nominal allies of General Gamaliel. 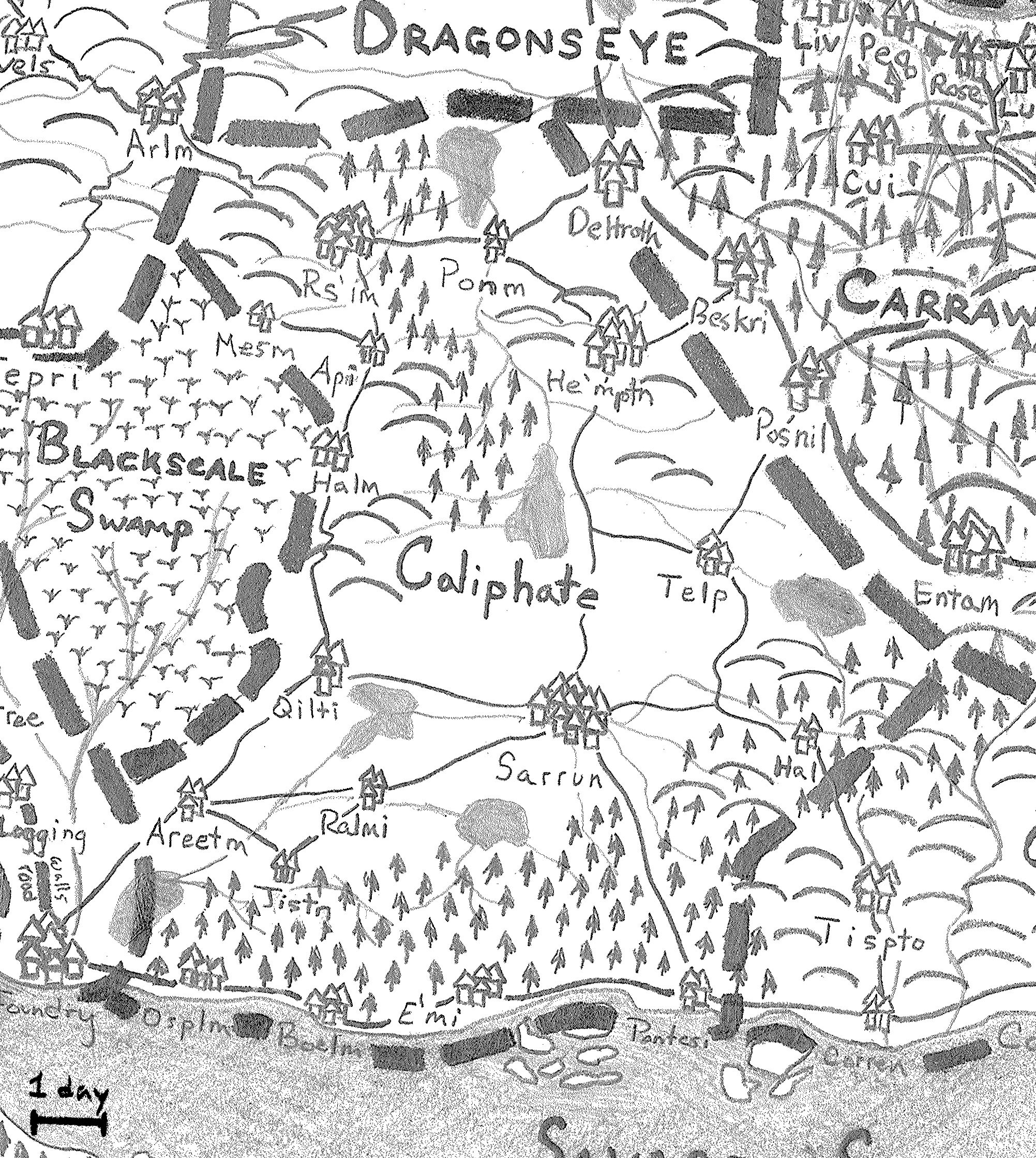 The Caliphate. The map's scale is based on the average medium race's walking speed.

Caliph Muhajiel runs the government as a benevolent tyrant. Only his brother operates as any sort of counterbalance to his edicts, and Gamaliel hardly ever contradicts his brother. Muhajiel has appointed most magistrates in the kingdom, as well as administrative satraps to oversee daily administration of the domestic needs of his subjects. Gamaliel has been given free reign to oversee and organize the armed forces, appointing officers and coordinating troop deployments. It is often said that Gamaliel is the true power in the Caliphate for he could easily overthrow his brother. However, Gamaliel always been fiercely loyal to his brother. Moreover, the Caliph is revered almost as a Patron to his people. A war between the brothers would surely destroy all they have built together.

Below the Caliph are a series of emirs who manage individual emirates within the Caliphate. These emirs hold absolute power within their borders, subject only to the Caliph himself. Gamaliel, who maintains no title and has never undergone the Landbond, often patrols the emirates to ensure that emirs are not abusing their subjects. Occasionally, Gamaliel has removed a wayward emir by hanging him. Emirs may appoint individual lesser nobles to manage parts of the emirates, but most rely on viziers and courtiers.

The Caliphate is blessed with a number of prosperous cities. To the north some of Deltroth, Ponm, Hem'ptn, and Telp sit in the midst of vast fertile plains that supply the Caliphate with much of its grains and grapes, and they export their excess production to their allies. Ralmi sits just outside the Starshine Hills and is nestled between two main rivers. Here, the gem-mining and quarry operations of the Caliphate are coordinated, with precious stones, and marble and granite blocks refined and then shipped southward to the port cities, or westward to the capital of Sarrun. Sarrun is a well-fortified city and once the gleaming jewel of Patronage. Stone is the capital's main building material, with more important buildings made up of precious and rare constructions, granite and marble adorn the capitals avenues and streets, but the luster has faded over the centuries as the kingdom has entered its long slow decline. Finally, the port cities of Pantesi and Osplm transport goods from across the Savage Sound, providing much needed revenue, as well as have extensive fish and salt industries.

The Caliphate values creative endeavors. Partly this is due to the elven influence of its founders, who appreciate art and entertainment. Partly, it is a necessity of their doctrine of Ferroclasty, which forbids the use of worked iron. Without metal plows, swords, and armor, many tasks become very difficult and it is only with the clever application of craft and magic that the Caliphate competes with its iron-using rivals.

The lack of iron also means that the Caliphate portrays itself as breezy and easy-going. Flowing robes replace restrictive bodices and pantaloons. Long ornate turbans replace short woven hats. Poetry is luxuriously long. Concerts are intricate and extensive. To many people, time itself moves more slowly in the Caliphate. However, this should not be seen as a sign of weakness. When called upon, the Caliphate can muster quickly. Most of the Ferroclasts believe themselves to be living in a paradise. They firmly belief that iron is the cause of all evil, and they will work quickly to stamp out any threat to their lifestyle.

The history of the Caliphate is a history of two brothers. It is not known whether Muhajiel and Gamaliel were born in the Fey Realm or in the Wild Forest. The earliest accounts of them are as full-grown elves. Nothing is known of their parents, and whether they have had any siblings (they have no known children). The elves first appear with Muhajiel announcing his theory of Ferroclasty in the early nineteenth century. The idea caught on quickly, thanks to Muhajiel's passionate speeches, and he quickly garnered a large following among the residents of the wild forest. This movement would likely have gotten nowhere without Gamaliel, who had a knack for organization and strategy. Moreover, the brothers appeared to be ageless. Even the long-lived elves do not live as long as Muhajiel and Gamaliel. Nobody knows why and the brothers have offered no explanation.

In 1885, the city of Sarrun was still mostly rubble. Eight decades ago, the Alabastrian Empire razed the city, virtually erasing the memory of the Empire it once housed. Isolated on the edge of the Empire, it was lightly garrisoned when the Ferroclasts struck, killing the Alabastrians and taking over the city. The Caliphate was born.

Emperor Juzhian made some token efforts to keep the city, but when it became clear that the Caliphate had no intention of resurrecting the Sarrun Empire, the Alabastrians considered it abandoned. The Ferroclasts quickly restored the edifices in the city and brought it to new heights of glory. It was strategically located near rivers large enough for small watercraft and to trade on the Savage Sound. As the population grew, the Eternal Elves faced the question of whether to expand eastward into the Albastrian Empire or westward to the Second Empire.

It is said that the brothers had resolved to conquer the Alabastrian Empire when they were visited by a Ramhead Ranger and a human prophetess named Aira. Nobody knows what transpired in that tent but the four of them, but whatever Aira said must have been persuasive. The brothers chose to go west.

The biggest problem with the plan was that the Second Empire was protected by an enormous wall. However, the Ferroclasts had left the bulk of their cult in the Wild Forest, planning to ferry them to Sarrun once the Caliphate was secure. Instead, Gamaliel ferried himself back to the Wild Forest and raised a second army. Combining this smaller force with the might of the Ramhead Rangers, the army attacked and sacked Southbar (now known as Foundry) from the undefended western face. When the city fell, the gates to the West were open, and the Caliphate owned territory on both sides of the wall.

The brothers then turned their sights on the imperial capital of Artifice. By this time, Efthal saw that the brothers could not be stopped. He fled into the Barrens and allowed the Second Empire to fall. The Caliphate now controlled more territory than any empire that preceded it. 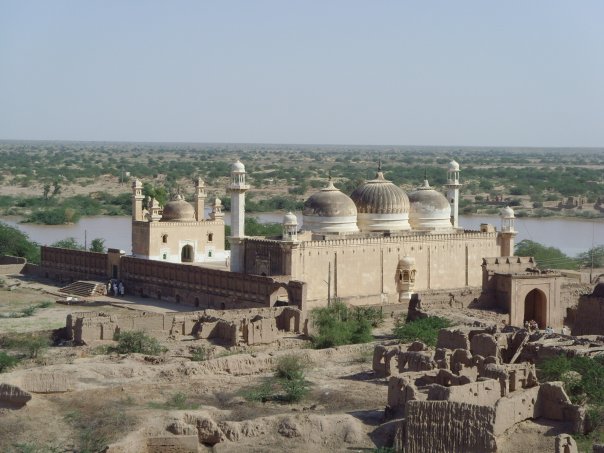 The architecture and art of the Caliphate is often grand, elegant, and stunning.

For more than 400 hundred years, the Caliphate managed its lands in peace. It allowed the Ramhead Rangers to pursue Efthal in the Barrens. Meanwhile, the Empire pursued the arts and sciences. In the Alabastrian Empire, the noble and refined Juzhian had been assassinated and replaced by Emperor Xarlem. As the Alabastrian Empire grew darker, the Caliphate became the shining beacon of civilization for Patronage and many thousands of people flocked to its borders, eschewing iron in exchange for peace.

In 2314, Emperor Xarlem ordered Oncia to reconquer Sarrun and thus consolidate all the lands that once belonged to the Alabastrian Empire. Oncia's attack was uncoordinated, and, say some, reluctant. Gamaliel crushed her army, and although she escaped Gamaliel's counterattack left the Caliphate in charge of all the land north to the shores of Nereid Sea, and east to the original borders of the Avatarlands. Oncia escaped to the ruins of Dragonseye. While there she and her honor guard discovered an item called the "Compass Rose". They founded the Order of the Compass, and secretly worked to restore Alabastrian control over the southern shore of the Nereid Sea. Gamaliel hunted Oncia mercilessly, but she and the Order of the Compass managed to sneak from one ruined city to another.

In the end, Alabastria proved to be more of a nuisance than a threat to the Caliphate. The Caliphate consolidated its control over these additional lands. It also destroyed the Wall, replacing it with the Walls Road. The Caliphate appeared stronger than any rival, a beacon of civilization and culture, heralding a new, never-ending golden age. But no golden age lasts forever.

In 2440, a new enemy appeared. Chingiz Ironbearer and his Ironguard destroyed the Ramhead Rangers in their once secret city. But the true goal of Chingiz was to destroy Ferroclasty, the philosophy on which the Caliphate was formed. Shortly after the appearance of Chingiz, Oncia, and an army of malcontents funded by the Empire conquered the city of Lucinda. While they spread their rebellion to other cities, Emperor Xarlem made a bold attack on the capital Sarrun itself. Gamaliel was forced to cede territory to Oncia in order to maintain control of the capital and save his brother. Shortly thereafter, Ironguard was founded and promptly began devouring the Caliphate's western holdings, sacking Southbar in the beginning of the 26th century.

Over the last two centuries, the Caliphate has steadily ceded territory to Ironguard in the west. Ironguard's gains emboldened the Caliphate's eastern enemies. Oncia regained her city of Downlach and reformed her eponymous kingdom. She also aided rebels along the Nereid Sea who founded Carraway. Although Gamaliel's strategic mind is as sharp as ever, even he cannot outwith two massive empires. While Ironguard and Albastria have suffered their own setbacks the Caliphate struggles to maintain its identity and position of prominence. Presently, it controls only the capital of Sarrun and a dozen or more emirates. If either Ironguard or Alabastria were to make a concentrated effort to crush this once great kingdom, the Caliphate would likely cease to exist.

At paragon tier, the heroes may be acting as agents of the Caliphate itself. The Caliph has many enemies that seek its destruction: