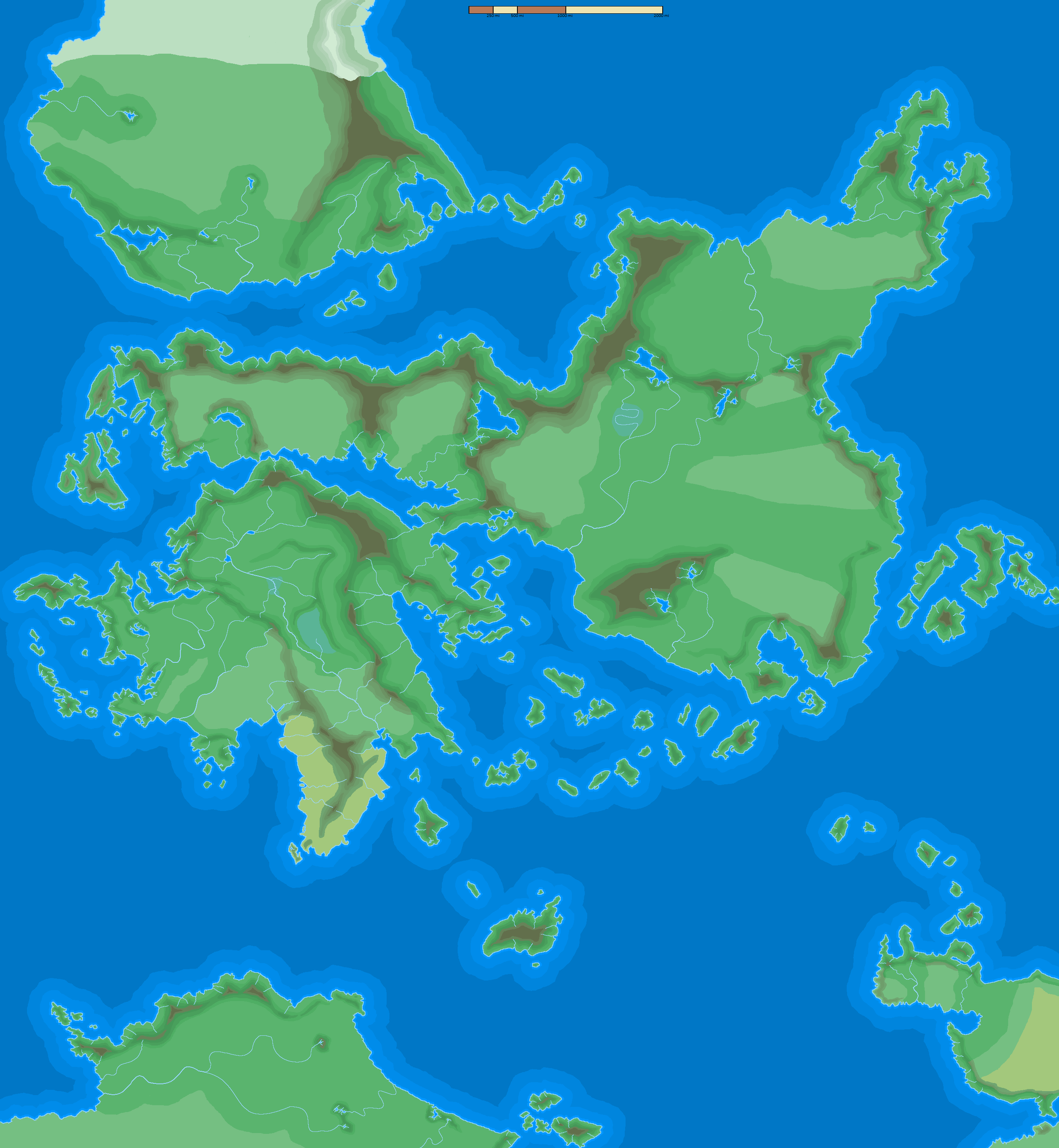 Oros (OR ohs) is an Earth-like world with one moon, and normal gravity and physics; even though the sun also orbits the planet. There is ample space for both wilderness exploration and political intrigue. It features an anachronistic collection of cultures and technologies. While primarily using bronze age weapons and armor it also boasts matchlock firearms and heavy use of Alchemy.

The primary region of play is the subcontinent of Ilarion and the southern reaches of Lais. Most of the nations listed below are on the subcontinent. Ilarion is very mountainous and has a mostly Mediterranean climate.

Romanesque territorial expansionists, Aylea (eye LEE ah) is often at war with one or more of its neighbors. The kingdom is divided into three major sections: the mountain, the northernmost section surrounding the valley; the valley basin, a swampy and dangerous land at the heart of the kingdom; and the lowlands, the breadbasket of the kingdom, to the south.

Marked by moderately sized communities with compulsorily military service, Crisanian culture is one that values independence as much as cooperation. They possess exceptional drive and a great capacity to endure, adapting to rough mountainous terrain and harsh coastal weather.

The Dao Ming Empire is the largest nation on Ilarion. The class hierarchy is a very finely stratified and rigid caste system. While it is a meritocracy, it is also a patriarchy. Men may achieve religious and social advancement through high performance on the imperial examinations.

All Halcyoneans learn to ride horses, even the women wear pants. Horse breeding is an essential skill. A horse is a traditional gift to male children when they turn 3 years old. Each family member has his and her own horse. Keeping one's horse in good condition is a point of honor. Archery and horseracing are common skills.

Dwarven strongholds high atop the mountain connected by lift systems to mines deep underground. Organized les like a nation and more like an expansive mining company.

Fjällheim is the ancestral home of the Fjäll Minotaurs. The region is loosely organized under a council of seven kings, four Fjäll from the mountains and three men from the valley. While the Fjäll herd goats and sheep, the humans sow barley, rye, and oats. They work together to survive.

All things are a matter of contract in Thebia and coin is king. No contract lasts longer than five years. Marriage is a matter of sealing financial deals, these contracts detail any obligation to produce offspring, the length of the marriage and any other considerations. Slavery is legal, every Thebian knows their value. Slaves are allowed to earn their own wealth. There are no prisons in Thebia; fines, forced labor, and death are the only punishments.