The dwarven nation of Ikarhus is not a true country, as the dwarves see it. They are a mining company. Their lands bypass the borders of many nations. When living and/or working within the borders of a nation dwarves will follow both company law and that nation's laws.

They built and live on top of mountains by carving flat or terraced expanses into the peaks. The layout of each city is standardized (unless the city is older than the company), changing only due to topography. Dwarves enjoy consistency and place a high value on order.

Dwarves live by the nine ways set down by Great Foreman Grimmwalk. Community is very important. They believe that in order for the community to be prosperous and successful, each member must be as well.

Dwarves describe useless things as “shale” (A barrel of spoiled fruit would be referred to as a ‘shale’s bunch’). Poor things (ranging from weather to business conditions) as “copper,” average things as “silver and gold,” and exceptional things as “platinum.”

Dwarves descend from earth elementals when they die instead of rotting their bodies turn to stone. Even when put to the pyre dwarves turn to stone rather than ash.

The Dwarves of Ilarion mine deep within the mountains, but their settlements are perched on the peaks. They do not worship the gods; the gods have no time for them and they've no time for the gods.

In time a pebble will grow into a boulder. 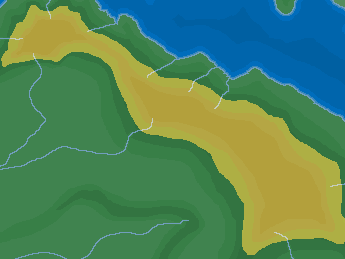 The Wolf Peaks form the eastern border between Aylea and Crisania. While both nations lay claim to them their true masters are the Dwarves.

Each dwarven city made after the founding of the company follows a strict pattern. The main office is built no less a hundred feet from the entrance to the main shaft. Across a wide street (two ore carts cam pass each other with room to spare) is an acre of empty flat land. It is used as the community needs it; crops, common grazing, festival grounds. The commons, company provided housing, starts next to the field. A step well is dug on the other side. The company store is next to the main office. After that is an alehouse, a bathhouse, a clinic, a forge, and a library.