Fjallheim society is divided into the three socio-economic classes: Thralls, Karls and Jarls. Thralls are the lowest ranking class and are slaves or serfs. Karls are free peasants that can own land and cattle. They live communally and share daily chores like plowing the fields, milking the cattle, building houses and wagons. They may employ, but not own thralls. The Jarls are the aristocracy; They own large estates with huge longhouses, horses, and many thralls. The thralls take care of most of the daily chores, while the Jarls engage in administration, politics, hunting, sports, visits to other Jarls or go abroad on expeditions.

Self-defense is very important and everyone - men, women, children, even thralls - carries a knife. Women are also allowed to carry axes.

Magic is especially feared and hated in Fjallheim. Only Clerics and Inquisitors are permitted to use it in public; Oracle may practice it temples only. The punishment for using magic is death, usually by beheading or burning. 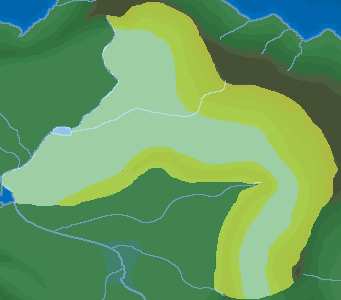 Windswept crags and steep mountain passes intersect a latticework of rough rocky terrain and alpine meadows in the Fjallheim Highlands. Harsh weather and terrain make living on the mountain a challenge. Communities must work together to survive.

Lush valleys and rolling plains are the hallmarks of the Lowlands.

Surrounded by an earthen, timber, or stone wall depending on the materials available cities in Fjallheim tend to spread out from an initial round village or fortress.

Slibesten Stenbord Svaneford Valnidlund - Centered around a walnut grove, Valnidlund (Vel noo loon) is well known for its textile production and dying. The surrounding farmland produces an abundance of flax, hemp, and sheep and goat wool.

Slavery is legal in Fjallheim. Thralls are despised and looked down upon. New thralls are supplied by either the sons and daughters of thralls or they are captured abroad. Thralls are used as servants and workers in the farms and larger households of the Karls and Jarls. They are used for large construction projects such as fortresses, fortifications, ramps, canals, mounds, and roads.

Women have a relatively free status. After the age of 20, an unmarried woman reaches legal majority and has the right to decide her place of residence and is regarded as her own person before the law. Widows enjoy the same independent status as unmarried women. In the absence of male relatives, an unmarried woman with no son can inherit not only property but also the position as head of the family from a deceased father or brother. She has all the rights afforded to the head of a family - such as the right to demand and receive fines for the slaughter of a family member - until she marries, by which her rights are transferred to her new husband. The paternal aunt, paternal niece and paternal granddaughter, all have the right to inherit property from a deceased man. Women are often priestesses and oracles. They can be poets, teachers, merchants, and healers.

Marriages are normally arranged by the families; alliances, financial concerns, and the couple's happiness are all considered while negotiating the marriage contract. It is a very important decision as the wife cooks the food, raises the children and manages the finances where the husband earns wealth, status, and brings home meat. A woman is given a dowry by her family and a 'morning-gift' by her husband. Additionally, the husband pays a bride-price to the wife's family.

It is socially acceptable for a free woman to cohabit with a man and have children with him without marrying him, even if that man is married. There is no distinction made between children born inside or outside of marriage: both have the right to inherit property from their parents, and there are no "legitimate" or "illegitimate" children.

A married woman can divorce her husband and remarry. To declare divorce witnesses are called in, the dissatisfied party or parties declare themselves divorced and list the reasons for the divorce. This has to be repeated in the couple's bedroom, in front of the main entrance to the house, and before a public assembly.

Reasons for divorce include: inflicting large wounds, slapping (especially in front of witnesses), if a husband tries to take his wife out of the country against her will, one spouse failing to treat the family of the other with due consideration, if a couple is too poor to support themselves and has to rely on their families for support, if a woman commits adultery, if a man fails to sleep with his wife for three years in a row, if either cross-dresses, if a partner makes mocking verses about them, if excessive anger or jealousy displayed by one spouse, incompatibility, general dislike, or unhappiness in the marriage. Local areas may see other, additional, reasons as acceptable as well.

After a divorce, the couple has to agree on a settlement dividing their property. As soon as the divorce is declared the woman can take possession of all her property. It is hers regardless of the outcome of the settlement. the partner demanding the divorce is penalized in the division of property to keep married couples together except in the most serious cases.

If the divorce is mutual neither is penalized: the wife receives her dowry and morning-gift, the husband takes back the bride-price, and if they had a jointly held property, the woman received one-third of their common possessions. If the husband calls for the divorce, the woman receives the bride-price, dowry, morning-gift, and one-third of any common property. If the wife calls for the divorce, she receives only her dowry and the morning-gift. If any property dispositions had been included in the marriage agreement, these are followed instead.

Child support is contributed by each parent according to his or her ability to work and is further supplemented by the families on either side. There are no firm rules for determining custody, although the mother always kept a nursing baby for its first year, and gains custody of all her children if their father dies.

Most buildings are single-room longhouses with wooden frames on simple stone footings. The walls are constructed of planks, logs, or wattle and daub. Turf roofs are common in the highlands for insulation and to increase grazing areas for sheep and goats. Steeply pitched thatched roofs are also common.

Illness, Death and the Pyre[edit]

The Fjallheims customarily eat two meals day: "day-meal" is eaten in the morning, two hours after the day's work is started, "night-meal" is taken at the end of the day's labor.

The mainstay of every meal is the big kettle of stew, called skause, containing whatever vegetables and meat are available. Whenever meat or vegetables are served from it, more is added to it. The broth becomes very concentrated over the course of days. It is served for both the morning and evening meal.

Bread is made in great quantity and variety, both flat and risen. Any grain, nut, or pulses can be ground into flour and used for bread; as can birch bark. Bread can be flavored with nuts, seeds, herbs, or cheese; or used to enclose fish or meat for baking in soapstone pots. Sourdough is common as well.

They use their knives as both a knife and a fork, and scoops, carved out of antlers, as spoons. Some foods are eaten with fingers.

In addition to skause, porridges, often cooked with milk or fruit and sweetened with honey, are a common breakfast among the Karls and Jarls. Thralls often eat pottage with unleavened bread.

Glazed vegetables, spit-roasted bird, eggs, sausages, meat pies, and pancakes with meat are served with the skause in any combination. Feast will contain the same types of foods, but more variety of them in a single meal.

The evening meal is the time for conversation, games, music, and storytelling. Hospitality is very important and even strangers may be welcomed.

Fresh fruit and honey on buttered bread, pancakes with fruit, or fruit preserved in honey.

Grilled barley flatbread either buttered or with smoked meat is the most common, followed by fresh fruit, dried fruit and nuts, and raw vegetables.

Milk and buttermilk are drunk every day. Ground chicory root is boiled and drank in the winter months. Alcoholic drinks like beer, mead, bjórr (a strong fruit wine) and, for the rich, imported wines, are drunk with the evening meal.

The following are regional traits for Fjallheim:

The following is a list of gear commonly available in Fjallheim: