While ruled by those with the most wealth the laws of Thebia are upheld by the Kenbet, a council of priests and government offices that forgo a wage. They are typically elders that have turned all property and wealth over to their heirs and dedicate their lives to upholding the law. At least one member of the Kenbet must sign off on a major contract for it to be legally binding. As the Kenbet do not and cannot have wealth of any kind they cannot be bought or bribed. They are housed in simple but comfortable accommodations in temples and government buildings.

All things are a matter of contract in Thebia and coin is king. No contract lasts longer than five years. There are no prisons in Thebia; fines, forced labor, and death are the only punishments. 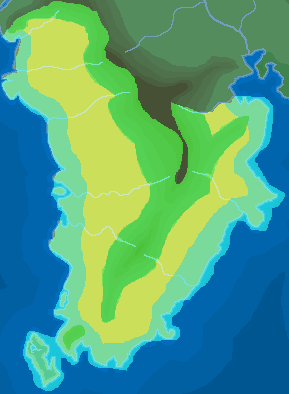 The coastal region is the most populous.