The military is the dominant social structure in Crisania. Any person wishing to gain Crisanian citizenship must complete two years of military service. Native Crisanians do so at the age of thirteen. This is very important as military rank determines social status; there are no hereditary rulers in Crisania.

Each city is run by a Legatus who swears loyalty to the Solitaria. While the various city-states are largely independent they ban together under the Solitaria to combat external threats. Additionally, the Solitaria may end disputes by ordering the Legati to duel. 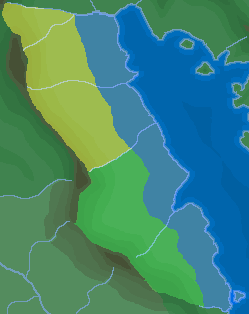 A mixture of sea cliffs, rocky shores, and sandy beaches, the Coastal Region is rich with resources. Fishing, farming, and hunting are common occupations. The population of this region is very friendly and gregarious. Trade is heavy in this region and cultural influences are brought in right alongside goods and spices. The use of chopstick and an increased use of rice in cooking is from the Doa Ming. Rooftop gardens and multi-course meals come from Halcyon. The use of falafel and offal in cooking is from Thebia.