Minia is a small nation in the shadow of the Fire Mountains and Green Lands. To the south is the menacing Ironguard. To the east is the menace of Midhaven. To the north, their only ally, Verdant. The interior of Minia is rocky and wild, and travel is treacherous and slow because of the lack of Landbonds. Even the Iron Road has begin to crumble, and the Barrens are beginning to encroach once more on its fields. The ancient capital of Ramhead is becoming overgrown with greenery.

Minia has a king, chosen by the aging elf Onggye the Beloved. Currently that King is the goliath Sejean, a wise and learned man who lives in the palace of Ramhead surrounded by one of the largest libraries ever accumulated in the Free Kingdoms. (It is said only the great library in Aerie in the Alabastrian Empire is larger, and some think Sejean's collection beats that one as well. While there are a number of noble families, descended from the Emirs and Pashas who remained after the Caliphate left the region centuries ago, they have no holdings. Rather they live on their diminishing wealth, as they struggle to fulfill the dying wish of their founder, Min. 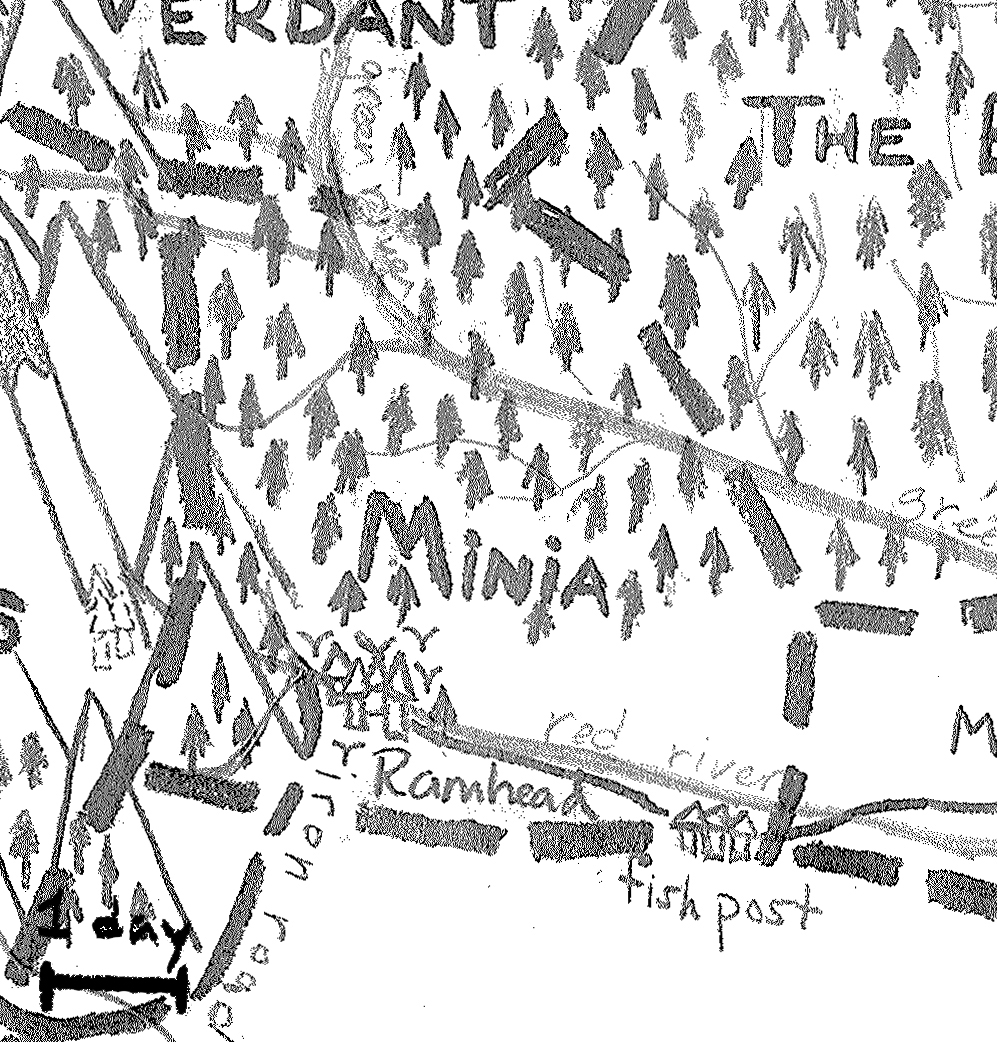 Minia. The map's scale is based on the average medium race's walking speed.

Minia is a starving and desperately poor kingdom. Without the landbond farming and ranching is virtually impossible. The people live as quasi nomads, foraging wild fruits and flowers, and hunting wild animals. The entire population is wild and sparse. The only population center, the capital of Ramhead, is overgrown with vines and weeds, populated by the noble families and their servants, as they struggle to find a solution to Min's Riddle. Central among these researchers is Onggye the Beloved, the leader of the almost cult-like society of Minia. The Minians treasure their self-reliance and are hotile and suspicious of outsiders. They will brook no suggestions that they should accept the yoke of a landbond, and any criticism of Min, Onggye, or Sejean will lead quickly to violence.

The area that is now Minia has a long and honored history. originally, it was the site of the Secret City of Ramhead, home of the famous Ramhead Rangers, a knighthood who liberated people from slavers. With the help of the Caliphate, they overthrew the corrupt Second Empire. The Caliphate appointed many of the luminaries from Ramhead as new nobles when the Caliphate occupied the lands that once had been the Second Empire.

Then Ironguard found and destroyed Ramhead and the Rangers. Ironguard exposed it to the world and absorbed its territory into Ironguard. Then Ironguard went to war against the Caliphate and drove it from all the lands that had once been the Second Empire. Ironguard dethroned the nobles of the Caliphate and forced them to live as commoners, working the land under the yoke of the lowest of landbonds. However, as the strength of Ironguard's founder, Chingiz, began to wane, the nobles rebelled. Led by Buzurg, they drove the dwarves from their lands. With the help of halflings, they threw off their landbonds and formed Midhaven.

Buzurg, however, sought to be a dominating king replacing the dwarved of Ironguard, but no less of a tyrant. Buzurg was a nobleman who traced his lineage to the Second Empire. He had no love of the philosophies of the Caliphate, or the freedoms enshrined in the glories of the Rangers. Many of the nobles who descended from the Caliphate were uncomfortable with Buzurg, but saw little alternative. Someone would have to be bonded to the land. 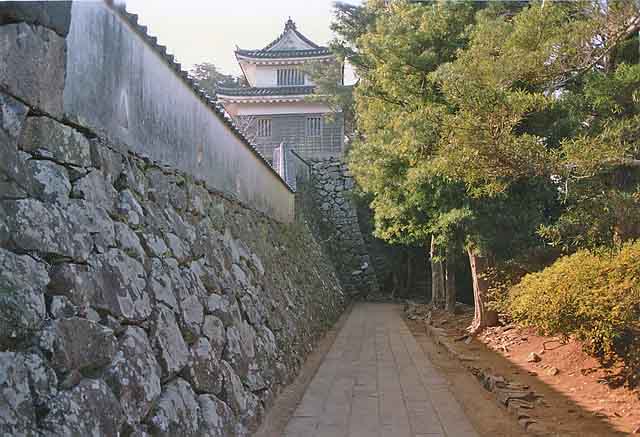 One of the few structures in Ramhead that is kept well-maintained. Without landbonds, overgrowth often takes over even a large estate in a matter of months.

One elf disagreed. Her name was Min and she said she saw a different path, one never before seen in Patronage. She recalled the history of Ramhead. She noted that the Rangers lived in this city for millennia, one with nature. She believed the Rangers had a way to live off the land that did not require a landbond. She rallied the other nobles who sympathized with her and broke away from Buzurg. With a mighty ritual, she increased the size of the Green River, which ran out of the Ochre Mountains, through the Barrens and cut through Midhaven. That prevented the Midhaven landbond from crossing the river. Then she used the same ritual on the Red River, which flowed east from the Fire Mountains. This prevented Ironguard rituals from crossing north. Then she sent her lieutenant (and some say lover), Onggye, to entreat with the Immortal who ruled Verdant. The Immortal decreed that it would not expand south into the new Free Kingdom of Minia.

Fifty years after Minia's founding, Min was dying of old age. She left her kingdom in the hands of Onggye. She gathered all the nobles of Ramhead to her and told them secrets, secrets that confirmed heir commitment to discovering the secrets of the Rangers. Onggye held the monarchy for fourteen years, but did not like the burden of leadership. She needed to continue her research. She appointed Han as King, but he fell ill and died. Then Ingya ruled for three years. Ingya was driven insane by the burden of running a kingdom without a landbond. She was caught and tried for treason when she attempted to cast a ritual bond. Onggye ruled again for three years as "regent" while she sought a successor. She finally chose the goliath Sejean, who has ruled ever since.

Fifteen years into his rule, Sejean was faced with an invasion from Ironguard. Temur had gathered 60,000 troops, likely more soldiers than there were individuals in all of Minia. Temur's advance was stopped, however, by a massive earthquake that buried half of his army under mudslides form the Fire Mountains. Nobody knows whether this was a fortuitous coincidence or the results of the Minian nobilities research into the Primal Arts. Either way, Minia's neighbors have given the kingdom a wide berth, letting it starve itself into submission rather than trying to conquer it by force.