Verdant is located in the frigid northwestern corner of the Free Kingdoms, nestled in between the Fire and Ochre Mountains and between the Green Lands and the Barrens. While its neighbors Minia and Winteren suffer harsh winters, it is believed the presence of the Oni known as the Immortal in its land blesses the nation with comparatively mild and short winters. The capital of Evergreen is centered around the tent of the Immortal, which is itself in the middle of a mile-diameter courtyard, which is ringed with a massive wall to preserve the Oni's privacy. To the north around the lake has burgeoned into a large trade center for trade along the green river. A lot of the goods from the rest of the Free Kingdoms are brought in along the White Road and then shipped south along the green river through the tents along the lake. 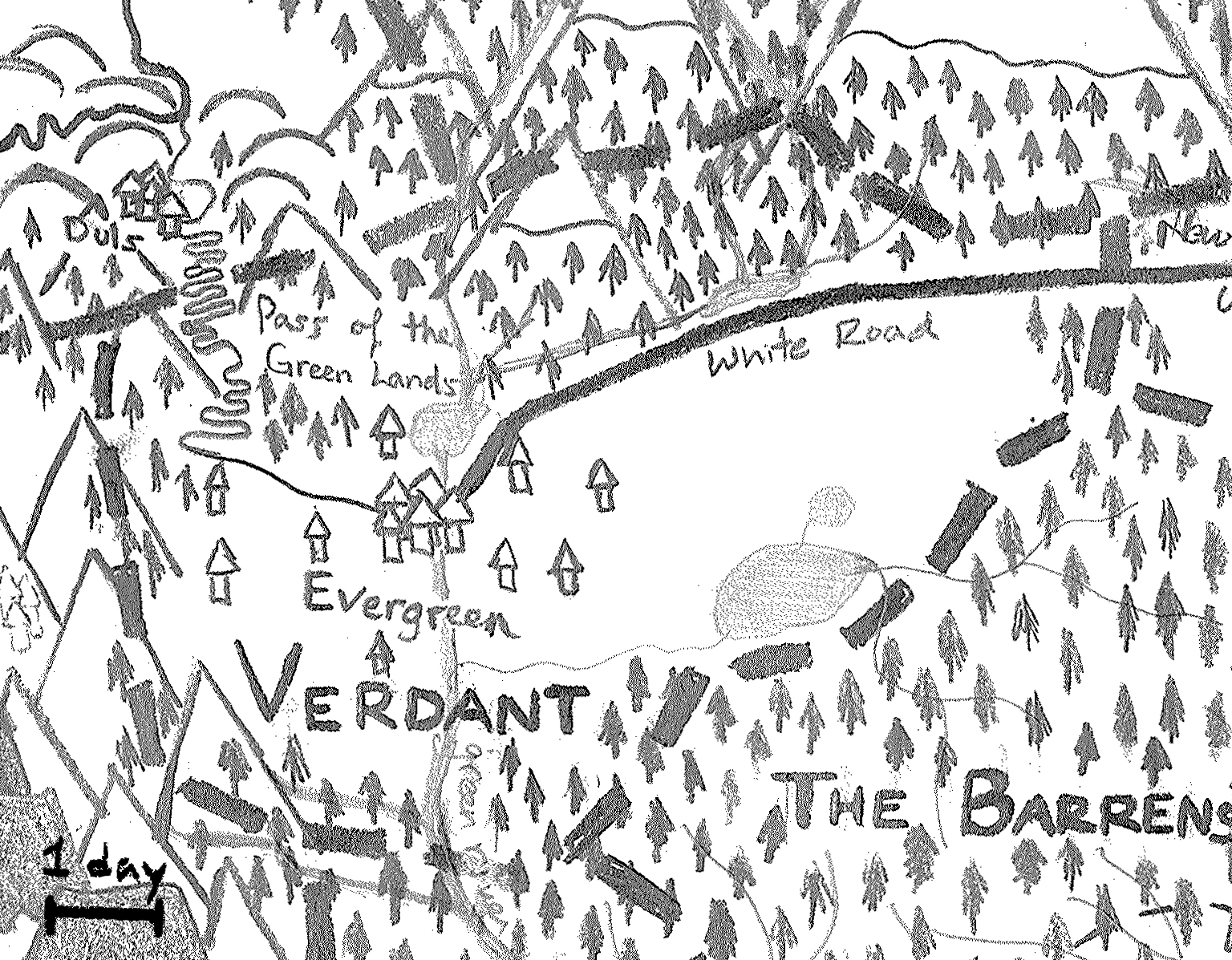 Verdant. The map's scale is based on the average medium race's walking speed.

The Immortal is the titular head of state, but has retreated from public view in recent decades, preferring to leave the management of the nation to its monarch. At this point, the monarch is allowed to choose its successor, and the Immortal only intervenes if it appears the monarch has chosen unwisely or has chosen a successor that will be unpopular with the Verdench at large.

Verdant does not have many layers of nobility. The monarch governs all Verdant in the name of the Immortal, and delegates individual fiefs to various lords and ladies. There is no third tier of nobility. Most of the plebeian population of Verdant are yeomen, but enserfdom is permitted as punishment for individuals who bring dishonor to themselves or their families. This dishonor can be worked off by a set time as a humble serf, after which the dishonor is considered purged.

Verdant is not well-populated and the estates throughout the land leave much of the land fallow, only nominally managed by the nobles. Farms dot the countryside in a thin line around the White Road and the Green River. Straying more than a few days travel from these high traffic areas leads to areas dominated by foul beasts and monsters or the creatures of the Barrens.

Honor is considered paramount in Verdant, even over the letter of the law. The Immortal founded Verdant, in part, to study the concept and elements of honor. Over the centuries, the Immortal has recognized various codes of behavior for people engaged in almost every aspect of society. Over the centuries, these codes have become more and more rigid, and various self-appointed doyens monitor individual Verdench to ensure they adhere to the strict honor codes governing their professions.

Honor is not merely a personal concept, but a communal one. Acting honorably brings pride and repute to one's family, one's companions, and one's community. Acting dishonorably besmirches those same people. This encourages everybody to keep one another acting honorably and to intervene when someone begins to stray from the path. Within a community, the honor one affords one another is considered very important. Honor debts (when one person has shown less honor to a person than that person has shown the first) are taken very seriously. Children, for example, have an honor debt to their parents that obligates them to care for their parents in their old age. A serf's labors are considered to show honor to the serf's liege until eventually, the liege is bound by honor to emancipate the serf, thus erasing the honor debt.

Verdench spend much time dwelling and contemplating the honor debts they owe others and others owe them and determining ways to bring balance to the honor they owe and are owed. A person who owes many people honor debts may be considered weak of spirit, cowardly, incompetent, or simply untrustworthy. However, a person who is owed many honor debts may be considered haughty, imperious, and prideful. A Verdench will consider themselves in an ideal state when they neither owe nor are owed an honor debts. However, someone who goes too long without incurring or earning honor debt may be considered to be too reclusive and uninvolved and may eventually find themselves a hermit or ostracized. Managing one's honor debt is a lifelong process.

Honor is treated a little differently in the commercial north around the lake. There, honor is measured mainly by your commitment to a deal, even after circumstances change such that adhering to the deal brings great personal cost. Many merchants who adhere to such a bargain are revered and much sought after as a business partner, for association with such an honorable merchant brings prestige. Some merchants who are seen to renege on an ill-considered deal will abandon the lake in shame (albeit with profits intact).

The Immortal left verdant many centuries ago, intrigued by the philosophical notions being contemplated by the great philosophers of the age. At first, the Immortal traveled the world, in various disguises, speaking with philosophers or their students. After centuries of travel, the Immortal returned to the borders of the Green Lands. It is unclear whether the Immortal chose to stay in the Free Kingdoms, or if the other Oni forbade him to return. Either way, the Oni settled on the border of the Barrens, within sight of his homeland, and taught.

Any orc or half-orc who fled the Green Lands could find a home with the Immortal. There, the Oni taught the exiles how to shed their formerly martial ways and find a new life in the Free Kingdoms. He taught them about agriculture and manners and, most of all, honor. These exiles then spread this knowledge to other peoples. Eventually, people of all races came to study this concept of honor at the feet of the Oni. The used the wood of the Barrens to build a community around the Oni's tent, and called the place "Evergreen". 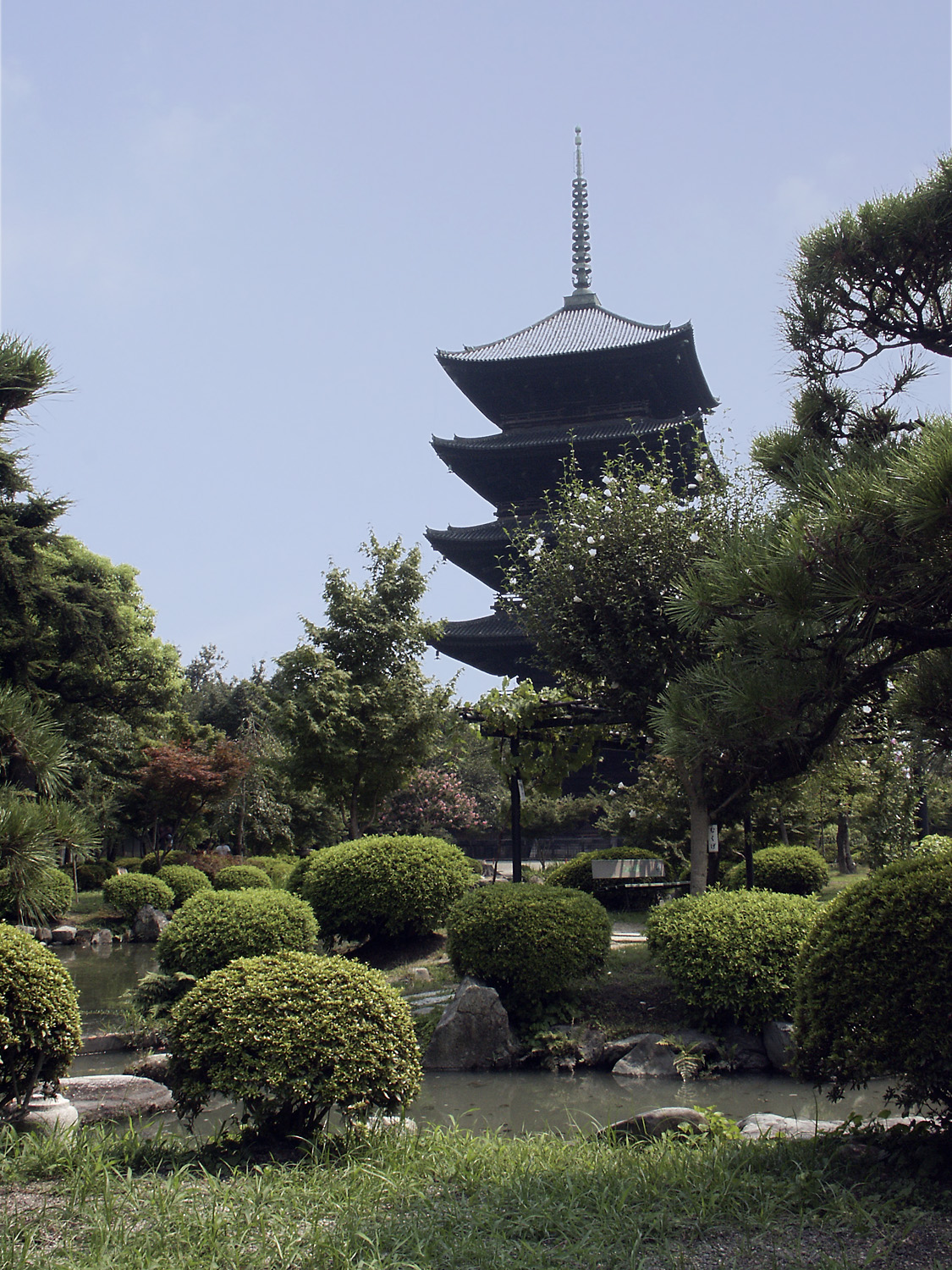 Verdant art and architecture is often serene and striking, and is designed to flow with nature.

By about 200 years ago, Evergreen was a burgeoning city, and there were so many people, that only a small proportion of them could ever gain access to the Immortal and his teachings. Two of those lucky few were an elf named Tsune and an orc named Ranshi. Tsune began writing down the words of the Immortal and distributed it to the people who did not have the time or the influence to attend the Immortal's lectures. Ranshi, however, spoke out against this practice. He claimed that orcs and half-orcs had a special bond with the Oni, as he was their Patron, and that his lectures conveyed meanings directly into their souls that could not be recorded in written words. Many orcs and half-orcs began listening to Ranshi's own lectures and retelling of the lessons of the Immortal and confirmed that they felt something stir wthin them that was ineffable and indescribable. Those who were not orcs and half-orcs, however, supported Tsune's efforts because this was the only way they could learn to follow a path of honor.

The two groups clashed frequently. It was becoming clear that Evergreen was too populous to be run haphazardly by the Immortal. They needed a leader with structure. The two obvious candidates were Tsune and Ranshi, and the conflict between the two camps was growing increasingly violent.

Then, one day in 2488, Tsune emerged alone from the Immortal's tent. Everyone felt the change. The Immortal had relinquished its landbond, and transferred it to Tsune. She stated that she was anointed the queen of a new kingdom of Verdant, an honorable kingdom for all peoples.

Ranshi decried the crowning. It was performed in secret in the dead of night, and that did not seem honorable at all. The Immortal would not emerge from his tent. While most people accepted Tsune's reign, the Pure Land Sect did not. In private, Ranshi revealed that he had a dream the night Tsune was crowned. Tsune is in league with another Oni, and together they attacked the Immortal. The Oni in the tent is not the Immortal. The true Immortal visited him in a dream. He is resting, recuperating, and he will return to oust the Immortal and all those who supported Tsune's usurpation.

A century after Tsune's accession, the Pure Land Sect believed their day had come. An Oni left the Green Lands with an army of orcs and half-orcs. They were joined by loyal members of the Pure Land Sect, led by its leader, a half-orc named Hojo. After three years of near constant campaigning, they reached Evergreen and slew Queen Taka II. They surrounded the sacred tent of the Immortal and went inside.

Only Hojo lived to tell of what happened when these two Oni met, and he was driven mostly insane. From what can be determined, the two Immortals spoke to one another in a language only they understood and then began fighting. All of the invader's troops, and any remaining residents of Evergreen were devastated and destroyed in the battle that ranger throughout the city. The battle raged for three days, and when it ended, one of two Immortals had died. Hojo's last words to the Pure Land Sect was that neither of these were the true Immortal. The true original Immortal had been slain by Tsune. Each of the two Oni were manipulating Verdant for their own purposes, and it was up to the Pure Land Sect to avenge the Immortal's murder and protect the Free Kindgoms from an invasion from the Green Lands.

However, the Pure Land Sect was devastated by the battle in Evergreen, and would not be able to reconstitute itself for decades. In the meantime, several powerful lords who were on their estates when the Immortals fought, and thus escaped the massacres, began to vie for the monarchy of Verdant. Some of them agreed with Hojo that the Immortal was a fake, some claimed that the Immortal was true and had won, and some claimed the Immortal was true and had lost. The Immortal simply reconstituted his tent in Evergreen and waited to see who would emerge victorious. One orc, King Taka, governed briefly, ignoring the "false Immortal" and yet powerless to overthrow him. In addition, try as he might, he was unable to generate a landbond without the Immortal's consent. Two years later, with Verdant on the verge of starvation, he was defeated by Queen Kira, who attended the Immortal in his tent, washed his feet and gave her obeisance. She emerged from the tent with a monarchical landbond, and Verdant was whole and at peace once more.

Verdant has been relatively peaceful since. The Immortal is rarely seen outside his tent, but makes occasional appearances on the accession of a new monarch. About 20 years ago, there was a peasant uprising against a lord who refused to honor the honor debt he owed his serfs. Queen Nori converted the lord into a serf and the leader of the serfs into his liege. 23 years later, that serf became King Kazu II, taking on the name of Quen Nori's father and predecessor in honor of the woman who raised an honored serf to a monarch and reduced a dishonorable lord to a serf.