Midhaven is in the midst of its "young siblings", the Free Kingdoms of the North: Minia, Verdant, and Winteren. It controls the western shore of the Nereid Sea, and casts a wary, protective gaze at Dragonseye. To the south, its open border with Ironguard is a constant source of insecurity. Midhaven, however, is blessed with natural bounty. It has acres and acres of fresh fertile fields, as well as the entirety of the Barrens for lumber and other resources. It has a temperate climate and moderate weather. Only the unstable politics of the region -- and thousands of years of unsatisfied vendettas among its citizens -- keep it from being the haven its founders intended.

Midhaven has massive ports, but some are ancient and Port Artifice, for example, cannot accommodate the largest newest ships from Winteren, Carraway, and Alabastrian Empire. The must go to Port Artifice, once a sleepy village that has grown fat with trade from the prosperous Winteren. Port Artifice has constructed new ports that accommodate any ship that plies the Nereid Sea. Port Artifice has also been aggressive in rooting out piracy among the islands off the coast and have lobbied extensively for Letters of Marque from the Queen allowing them to take the fight directly to the pirates, and even as far as Duat (since most pirates hail from that Realm). 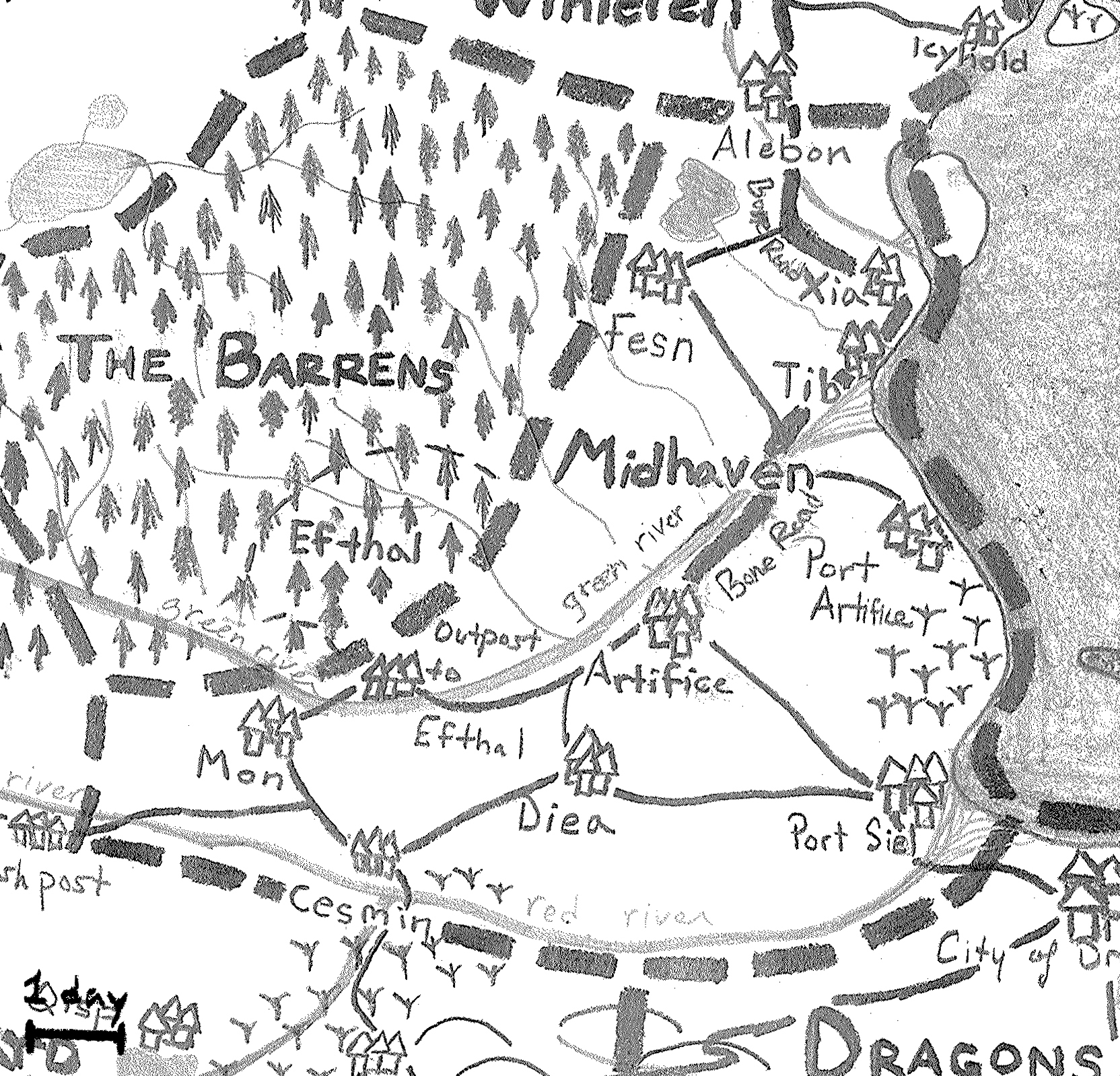 Midhaven. The map's scale is based on the average medium race's walking speed.

A regal kingdom, Midhaven drew upon thousands of years of Imperial rule when establishing its government. Well-known as the epitome of bureaucratic efficiency, the Midhaven government is a force with which to be reckoned. The various nobilities are carefully cataloged by rank and demesne, and a variety of protocols are expected to be followed during the course of any official act. Clerks and satraps abound and few nobles can manage anything without an extensive court.

Most of these regal powers have been impoverished by centuries of rule from Ironguard, which imposed a dwarven order on the land, and spent much of its occupation trying to break the backs of the noble families, with limited success.

Artifice, the capital, is an ancient city and one of the first in Patronage. It sits in the middle of Midhaven. Some believe the use of Artifice as the capital is too reminiscent of the days of the Second Empire, which still has negative connotations, and would like to move the capital north to Fesn, a city which mostly deals in the lumber trade.

Midhaven is as cosmopolitan a kingdom as the world has seen. Almost every mortal race can be found here in some numbers, except the distant deva and eidolons, and the wights. Somehow, Midhaven manages these disparate races, affording them each an equal opportunity to manage estates, conduct business and access to the law. Informally, however, old prejudices run deep. Antipathy to dwarves, elves and goblins runs high, since this land was only recently a part of Ironguard and the Caliphate. Dwarves hate elves, and orcs and ghilan clash over northern politics. Humans and warforged are almost universally seen with disdain, and it is almost with relief that so many humans have fled Midhaven for the new Kingdom of Dragonseye. Still, the nobility at least make a token effort to treat everyone with a semblance of equality, at least insofar as necessary to keep peace in their counties.

Midhaven's capital, Artifice, is one of the oldest cities in Patronage and it is dotted with the ruins of the preceding empires that failed to hold it. Trade along the Nereid Sea forms an important part of Midhaven's economy. Most of its port towns specialize in shipbuilding, thanks to their proximity to Fesn and Mon which supply them with lumber. Xia specializes in fishing and large-game sea creature hunts, and it exports whale oil and other rare commodities from the hunts across Patronage. Tib is a heavily fortified and very cosmopolitan port city, and the center for trade, potentially, throughout Patronage. Port Siel is a growing mercantile center that manages to trade with Ironguard, Minia, and Dragonseye, as well as arranging for more trade from even more distant locales. Many of the established families in Artifice look upon Port Siel's increasing wealth with envy and concern.

When the Ironguard Warlord Chingiz died, his nation had occupied the lands in and around the ruins of Artifice for more than 80 years. The descendants of the once noble families who governed these lands under the Caliphate, and before that under the Second Empire were proud and had never forgiven the dwarves for forcing them from their seats and replacing them with military appointments. With Chingiz' death, Ironguard fell into decline and the noble families rose up to reclaim their demesnes. The Caliphate was distracted by a dispute with the southern kingdom of Nidvalar, and the neighboring kingdoms of Verdant was engaged in the Immortal War. Seven years later, a goliath named Buzurg led his armies into the City of Artifice, laid claim to it, and declared himself king of Midhaven. He traced his ancestry to the old kings of the Ardashid Dynasty.

Buzurg immediately began using his martial prowess to subdue and subjugate the other noble families and recognize his authority in Midhaven. To a large extent, he was successful, particularly in the commercial communities of Dragonseye and along the Bone Road, which valued security and wealth over their own martial independence. In the east, however, Buzurg was opposed by an elf named Min. Her ancestors traced their lineage to the Caliphate, and she refused to accede to someone who appeared to be trying to resurrect the Second Empire (or perhaps to create a third). Other like-minded nobles rallied to her banner, and the western half of the region was inflamed in war. In the end, Minia and Midhaven separated, and defeated, Buzurg spent his remaining years governing a kingdom that constituted only half of the empire of his dreams.

Buzurg was succeeded by his daughter Uwa. She proved to be a more eager administrator than her father and placed the young kingdom on a solid financial footing. Using tariffs from, the communities along the Nereid Sea, and lumber from the Barrens, she built stronger roads and ports and increased the wealth of her populace. For thirty years after Minian succession, Midhaven knew prosperity and peace. 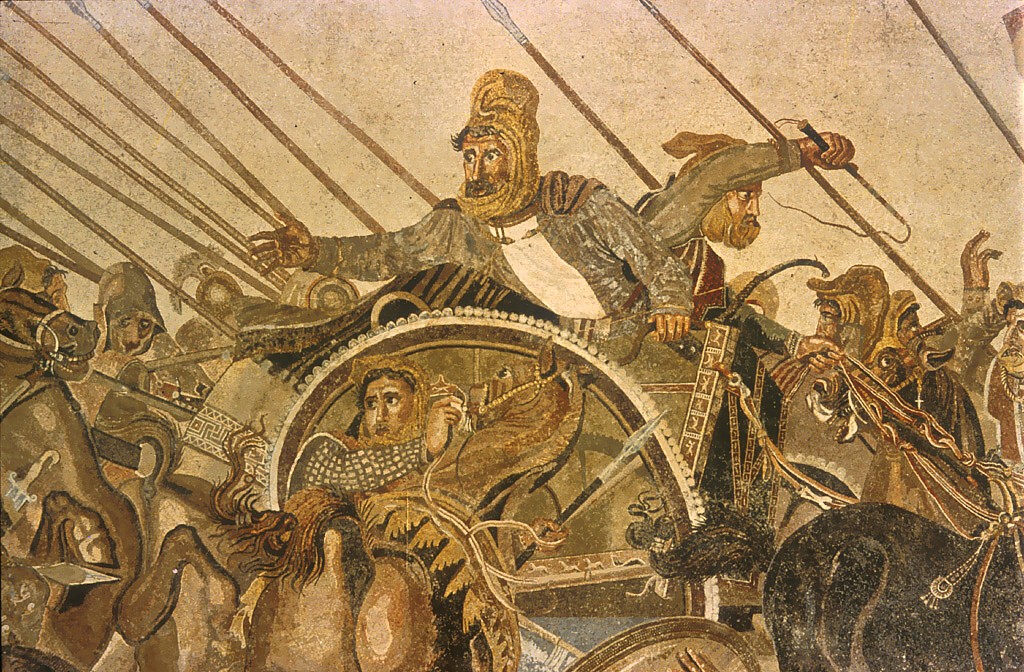 This mosaic of King Buzurg is one of the few representations of the founder of the kingdom.

And then came Temur. The dwarf was angling to succeed Chingiz as Warlord of Ironguard (which he eventually did). To rally his people and reclaim the fading glory days of his kingdom, he reconquered Midhaven, driving Queen Ghiya into hiding in the Barrens for twenty years. But Ghiya never gave up hope. At the end of her days, she saw that King Temur was himself getting old and tired. He had neglected the management of his northern lands. The Province of Midhaven had become a dumping ground for the incompetents of Temur's legions.

Ghiya led her troops against the Ironguard armies and drove them southward. She declared the Kingdom of Midhaven independent once more. Two years later, she died, peacefully, resting on the Jade Throne in a restored Artifice, having fulfilled all the promises of her subjects. Well, almost. Ghiya had recaptured all of former Midhaven, except for the key port city of Dragonseye. The port city was captained by a dwarf named Molug, who had been exiled there as a drunk and coward, but he seemed to find his nerve during Ghiya's restoration. He rallied his ragtag troops, quelled internal rebellion (by bringing the Midhaven noble families there), and repelled numerous efforts by Midhaven to reconquer the city. Molug lived in Dragonseye his entire thirty-year career.

Meanwhile, the kingdom once again knew security, though not peace. The goliath monarchs of Midhaven fell victim to inbreeding and insanity. King Buzurg IV was almost sociopathic, forcing nobles to solve disputes through "honor combat", that was little more than butchery and would result in both disputants' families being tortured if they did not entertain the king with a bout. Finally, a genasi lord named Iskander could bear it no more. He rallied the lesser nobles to his banner and slew Buzurg IV on the battlefields outside Artifice. (Ironically, Buzurg IV died in single combat against Iskander.) He restored the nobility as it has existed before Buzurg IV, ad when he died, his daughter Jaha became queen. Just as Iskander is often called the "Second Buzurg", Jaha is often described as the "Second Uwa".

When the dwarf Molug finally died, Queen Jaha saw a final opportunity to reunite all the lands of Midhaven. She raised a giant army and marched on the city. Temur responded with his own legions and both Carraway (encouraged by Oncia and the Order of the Compass) and the Caliphate saw an opportunity to capture this strategic port. This became known as the Dragonseye War, and it ended in a way no participant would have imagined. As the four armies clashed, the waters of the Nereid Sea began to boil and overflow. Only the appearance of a human named Rickard, and his ragtag court was able to stop the swelling seas. It also stopped the war, and after intense negotiations, Rickard was named Archduke of Dragonseye. Midhaven recognizes the Archduke, but did not relinquish its claims to that land. Neither did the Caliphate, Ironguard, or Carraway. Now, the four powers watch and wait to see if the young kingdom can hold the prize it so dearly won.