Nidvalar is a small kingdom on the shores of the Savage Sound, wedged between the Wild Forest (from which they gather most of their timber and raw materials) and the Caliphate. To the north, across the Iron Road, is Ironguard. The lands of Nidvalar are often black with soot spewing forth from the arcane foundries in the capital. 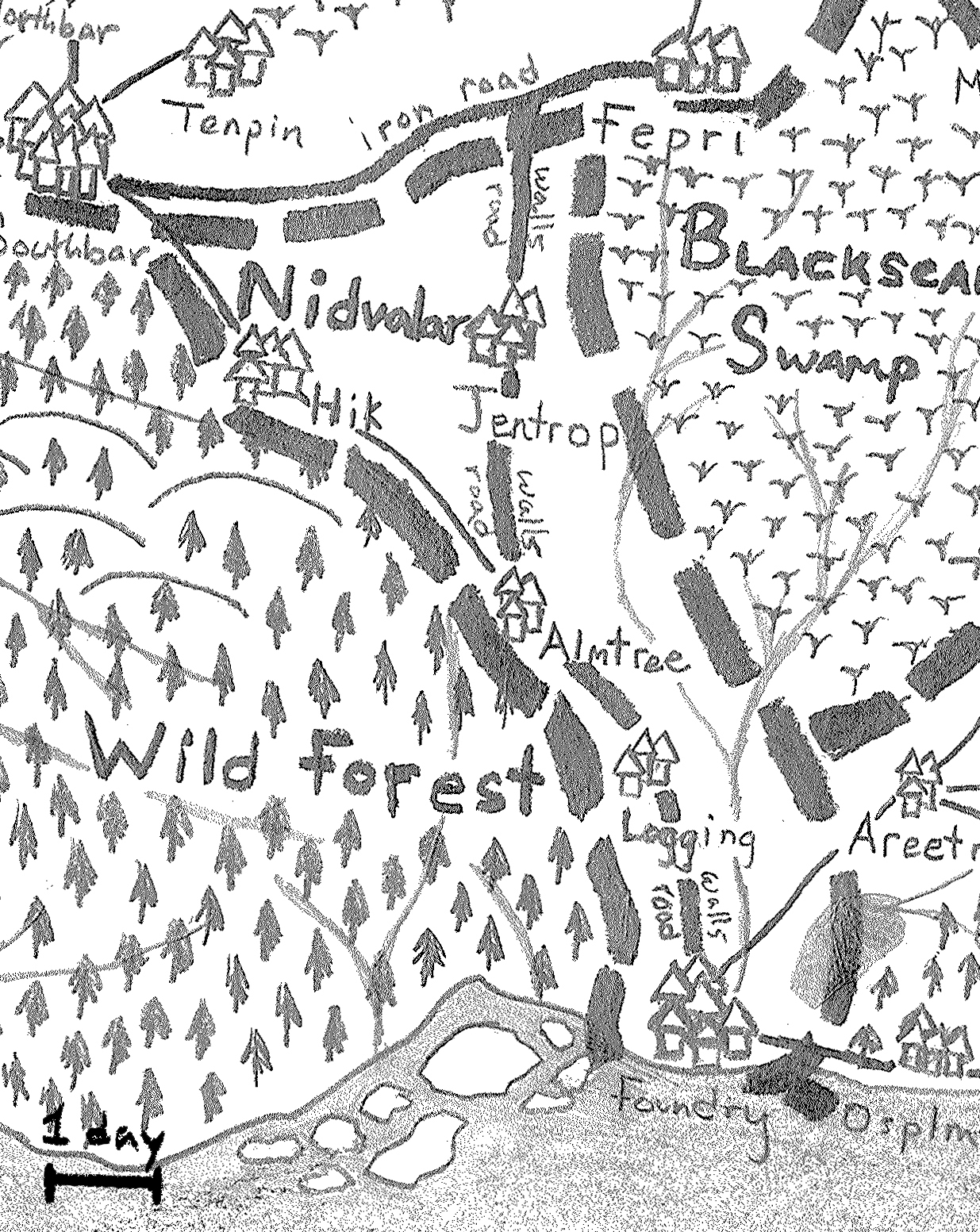 Nidvalar. The map's scale is based on the average medium race's walking speed.

Foundry, the capital of Nidvalar, was once called Southbar, the southernmost anchor point for a massive wall that separated the Second Empire from the Alabastrian Empire. It was the first city conquered by the Ferroclasts, as they began to create their Caliphate. The Caliphate destroyed the wall and enforced a strict ban on all worked metal. This led the Kingdom of Ironguard to wage war on the Caliphate, eventually resulting in the liberation of the city and its inclusion in Nidvalar.

Meanwhile, the Wild Forest, which had once been the haven of Ferroclasts, was becoming a refuge for people escaping the tyranny of both Ironguard and the Caliphate. Amongst the refugees was Buka, a dwarf who fled Ironguard to avoid conscription into its legions, and Hara, an elven wizard who rejected ferroclasty. Together, they unlocked the secrets of making constructs. But the meager resources of the Wild Forest was insufficient for their vision of world where labor was performed by artifacts and people became a world of artisans.

When Ironguard was beset with a century of internal fighting, Hara and Buka, and their disciples, created an army of constructs and took over the city of Southbar. They renamed it Foundry and called the surrounding lands Nidvalar. They repelled successive attempts by the Caliphate and Ironguard to reconquer their possessions.

After the war period had ended, Hara and Buka began to bring their vision to fruition. They refused to become monarchs. Instead, they fashioned a legislative Assemblage from the arcanists and wizards under them. The two enjoyed almost complete respect, and while they were nominally Prime Ministers, they were so well-respected that the Assemblage was often nothing more than a rubber stamp for their desires.

Except for one instance. During Ironguard's Civil War, a general named Ulanganqara came to Nidvalar and sought to purchase or hire a construct army. He pledged wealth and an alliance with Nidvalar. Buka urged the Assemblage to approve the purchase, and all seemed like it would go as planned. Then a charismatic young member of the Assembly named Demetrius made an impassioned speech in favor of Nidvalar neutrality. He warned that Nidvalar's strength lay entirely in its exclusive knowledge of constructs. This general may have good intentions, but if his advisors could study the constructs, they could replicate it and then Nidvalar would be destroyed. Demetrius swayed the Assembly, and it represents the first time the Assembly rejected a request from Hara or Buka, the Founders. Buka accepted the defeat graciously (and the general ultimately lost his bid to rule Ironguard), but he did not forget the slight.

Eventually, Hara and Buka retired to their estates to experiment in solitude, leaving the Assembly to govern. In their absence, however, the Assemblage began bickering amongst themselves. The privileged position of membership in the Assembly led to a growing problem of corruption and cronyism. The most ambitious and corrupt of these officials was a man named Devon. When he maneuvered, almost openly, to purchase the position of Prime Minister, Demetrius stood in the town square and made another impassioned speech against corruption. The speech unified those who were not cronies of Devon. The Assembly stood at a standstill, deadlocked. The tie vote was only broken when Hara and Buka arrived in Foundry from their estates and voted for Devon. Demetrius was stunned. He blamed Buka for being vindictive over the vote against sale of construct armies to outsiders. Devon pronounced that Demetrius had spoken sedition against the Founders and ordered him exiled. Demetrius left, with many of his own followers, and he founded the Clockwork Circle, a society of renegade construct builders.

Hara returned to her estate, but Buka chose to remain in the city. While there he observed the corruption that had taken over the Assembly. After ten years, he intervened. Under his orders, Devon was arrested for corruption, tried, and executed. His cronies were also punished. A new Prime Minster was appointed and Buka oversaw the reformation of the Assembly. Satisfied, he now left the Assembly, for parts unknown. Some say he went to visit Demetrius in the Wild Forest, but Demetrius refused his apologies. In exile, Demetrius became consumed with the notion of revenge. He will not rest until the walls of Foundry come tumbling down.

Buka and Hara still make occasional forays into Foundry, just to ensure that the Assembly does not fall into corruption again. However, for now, the Assembly appears to function properly. But the Assembly is always a hotbed of schemes and politics, and resentment amongst the non-Assembled, and among the warforged slaves continues to grow. Demetrius' Clockwork Circle works to liberate the warforged, and works towards the day when the Foundry is dismantled and the Clockwork Circle rules Nidvalar.