Please refrain from making major edits to this page, as it it more or less complete. If you feel that a major contribution is worthy of being made, discuss it on the talk page before editing. If it is a minor edit, go ahead and make it. 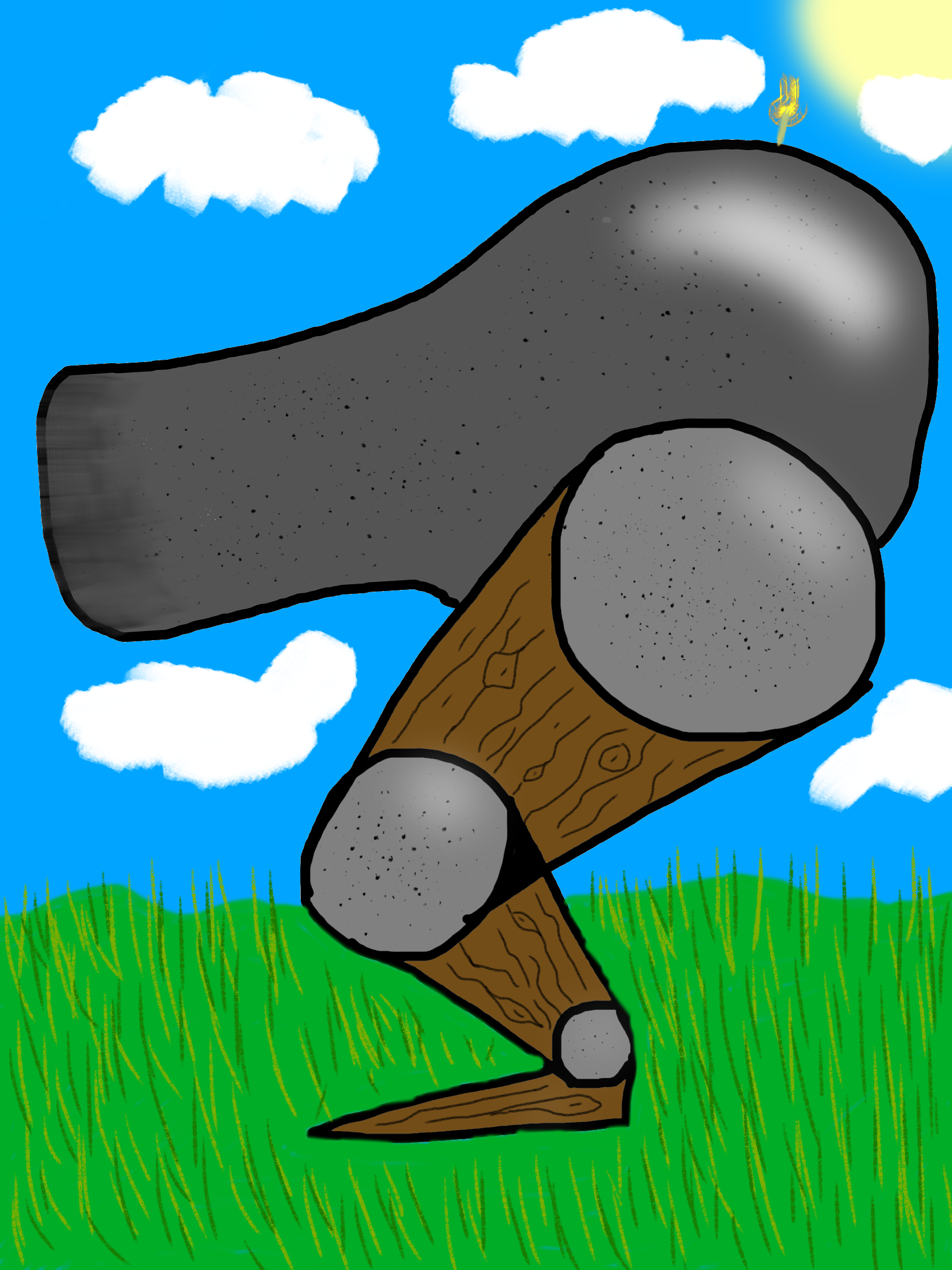 A digital drawing of a gunfolk, by Kanon

Gunfolk consist of a barrel and two legs, both being mechanical in nature. They don’t have arms, but can channel the magical energy that animates them into a lesser form of ferrokinesis that allows them to “stick” most objects to themselves and wave the around. Non-ferrous items can be carried by gunfolk, but are carried clumsily, as the only way to move them is with telekinesis. They usually have cannon-like barrels and legs made of wood and stone/metal. They communicate via a form a telepathy where a sound radiates from them, similar to as if they were speaking, however, the find it cumbersome as it drains them of their magic that animates them, yet enjoyable, as many gunfolk are chatterboxes, so often they will communicate via elite body language, where most people can understand what they’re trying to communicate.

Native to Broadbarrel, gunfolk were made as bodyguards, hunters, be it bounty or game, or basically any other job that would require a walking cannon. The first gunfolk was made by a tinkerer with some magical prowess is an effort to create a construct with the relatively newfound technology that was firearms. They started off being sold to wealthy people, but as they were mass produced, their priced lowered, and were sold to basically anyone who had decent amounts of wealth. They were always considered to lack emotions, but the magic that animates them also gives them consciousness. When this was discovered, some people stopped treating them as slaves, and more as pets, but rarely as friends. The gunfolk, after realizing that they could one day walk as individuals, began to go rouge, and demanded that they be treated better. The citizens of Broadbarrel fought back, but, as they were fighting guns with legs, many died. Eventually, conflict died down, and the citizens of Broadbarrel and gunfolk went their separate ways, though hostility continues.... They stopped being constructed and bought as people feared another outbreak, but some gunfolk were still sold, either as slaves or by themselves as mercanaries.

Gunfolk are overenthusiastic yet cowardly and lazy, but sometimes very loyal. They love to shoot things and fight, but almost always retreating when things get tough. They like to be fashionable and to other races seem oddly lovable yet annoying. They are very prideful and boast often, but that doesn’t stop them from refusing special treatment, they love being the center of attention and are very affectionate to others, even to the pointed of wanting to get pet like a dog.

Gunfolk have traditional naming schemes, similar to humans, but often they choose nicknames for themselves that relate to their gunfolk nature, sometimes being boastful, and most often being “cool.”

Guns with legs.
Ability Score Increase. Your Dexterity score increases by 2.
Age. Gunfolk don’t mature physically, but do mentally, becoming “mature” at age 3 and “elderly” at age 200.
Alignment. Gunfolk are the definition of chaotic stupid, almost always being chaotic, and usually being neutral. Because of their emotional fragility, things such as torture can easily mold their alignment.
Size. The common general purpose model is 3 feet tall, but others can range from 2 to 4 feet tall. Your size is small.
Speed. Your base walking speed is 30 feet.
Tremorsense. Because of gunfolks’ familiarity with explosions and quaking due to their cannon, they have tremorsense up to 30 ft.
Gunfire Shot. Gunfolk are walking cannons, and as such can shoot themselves. Whenever they shoot, they are knocked backwards 5 feet and a target of their choosing takes a _d4 of bludgeoning or piercing damage(bludgeoning if it is more cannon-like, and piecing if it is more gun-like), _ being a placeholder for the player level of the gunfolk. You will need to complete a long rest between uses.
Firearm Affinity. You know yourself too well, and so you gain proficiency with all firearms and gunner’s kits.
Heavy Weapon’s Expert. You can hold weapons with the heavy property without penalty. Weapons with the two-handed property can be held with either 1 or 2 hands by you.
Languages. You can speak, read, and write Common and Theives Cant, but only when the Thieves Cant relates to combat.
Subrace. You can choose between the default model or the pocket model.

Ability Score Increase. Your Dexterity score increases by 1.
Pocket Sized. You are small enough to hold, and, as such, can be held by a small or larger creature, using two hands if it is medium or smaller sized, and one if it is large or larger sized. When held, your initiative rolls are equal to your holder, and they can use you as an improvised melee weapon, dealing whatever damage the weapon you are holding does when used with a melee attack. Your size is tiny.
Lightweight. You get knocked back 10 ft. instead of 5 ft. when you use your Gunfire Shot racial trait, and you have disadvantage on saving throws against being knocked prone.

When creating a Gunfolk character, you can use the following table of traits, ideals, bonds and flaws to help flesh out your character. Use these tables in addition to or in place of your background's characteristics.