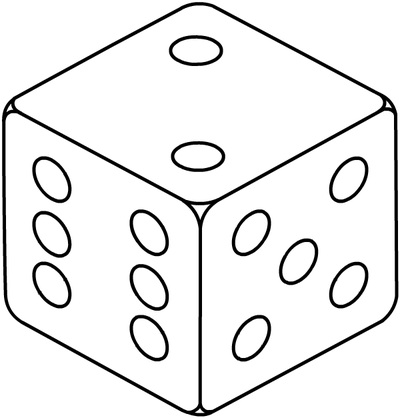 Dices, the God of Chance and Probability, Cursed and Praised in the same breath by those seeking his ideal.

Throughout the various dens and bars, on the road amidst the trees, and nestled in the biggest of cities, one name is cursed and praised: Dices, the God of Chance and Probability, progenitor of luck, both good and bad, and the eternal shuffler of the odds. His game is one that is never certain, always seemingly up in the air, and ultimately, always fickle. Dices earns his praises and his curses because his existence owes to the ideal of entropy, which begets chance and probability. He governs these ideals much in the same way that they themselves are presented; Whimsically and arbitrarily.

A deity rarely seen or described, Dices is more a force than any sort of figure. In the times when he does take a form, it is usually that of a hooded spectre, carrying with him a pair of crudely marked golden dice, the face of which can never be seen, except for the occasional wry smile as the deity holds up the magical dice. In this form, he usually tends to gamble among mortals of the world, but even when not doing so, he still uses the dice as a means of determining what to do, next. As one might expect, considering his description, very few images of Dices exist, and those that do are often exaggerations, stylizations, or simply fake. Most often, in order to represent the God of Chance, the image of a six-sided die with rounded corners is used to symbolize him.

Despite their similarities and overlapping interests, Dices is almost always in opposition to Fate. The two operate on opposite sides of the same ideals, after all: Fate would have the world run its course according to the weave she plans, while Dices would have the world be a chaotic mess of happenstance. While these are extremes that are commonly depicted by earthly artists and tales, it is not far from the truth.

Dices has followers of the fatalistic kind, except that instead of entrusting their lives to pre-destined fates, as Fate's followers do, they tend to believe their lives are up to a type of cosmic chance, and therefore like to observe the seeming entropy of the world around them.

In terms of actual dogma, followers of Dices believe in viewing the world as a construct built upon probabilities. They believe that anything and everything is possible, and stress the idea of probability as the only limiter to any given event in the world around them, and find comfort in attempting to "game the system" as much as possible without completely breaking it. To followers of Dices, life is a large game of dice, and while many of its players can find ways to better or worsen their chances in their endeavors, they can never truly be certain of what it holds for them. This is the ideal that most followers of the god hold true.

Some sects of Dices believe that altering probability is to be viewed in disdain, but this is a minority in the world of Tirr, and rather the only caveat and practical ideology of followers that appears to be widespread is the idea that no one thing should ever have a 100% chance of occurring. If there is a law, it should have a exception. If there is a competition, there should be an element of chance. If there is a battle, take risks!

Dices is worshiped in the dens of the slums, and in the bars and saloons of cities all around. Gambling is an especially contagious conviction, after all, and the very act is considered one of the most common and understood ways of serving the God's ideal. That said, a true temple for Dices only exists in the Silverfell region, in the capital city of Goldengate, where even there, the priests raises funds via gambling, and often emulate the same behavior of their deity, themselves, approaching every question with probability.

Dices takes up a lesser throne in the Pantheon, and tends to be less than active in the proceedings. This, and his constant whimsy, earns him a kinship with Bycore, who has many of the same traits, but tends to be the bane of others, such as Balthazar and Mephistopheles, both of whom see his fanciful nature as an unchecked and problematic element in the court.

Despite their eternal rivalry and difference in station, Fate and Dices do not have any animosity toward each other. Before the banishment of the Aesir, Mana often held the two as necessary opposites to one another, and acted to balance the two.

Jubila and Vault tend to enjoy mixed relationships with Dices, as his ideal can both cause celebration and prosperity, but can also ruin each of these.