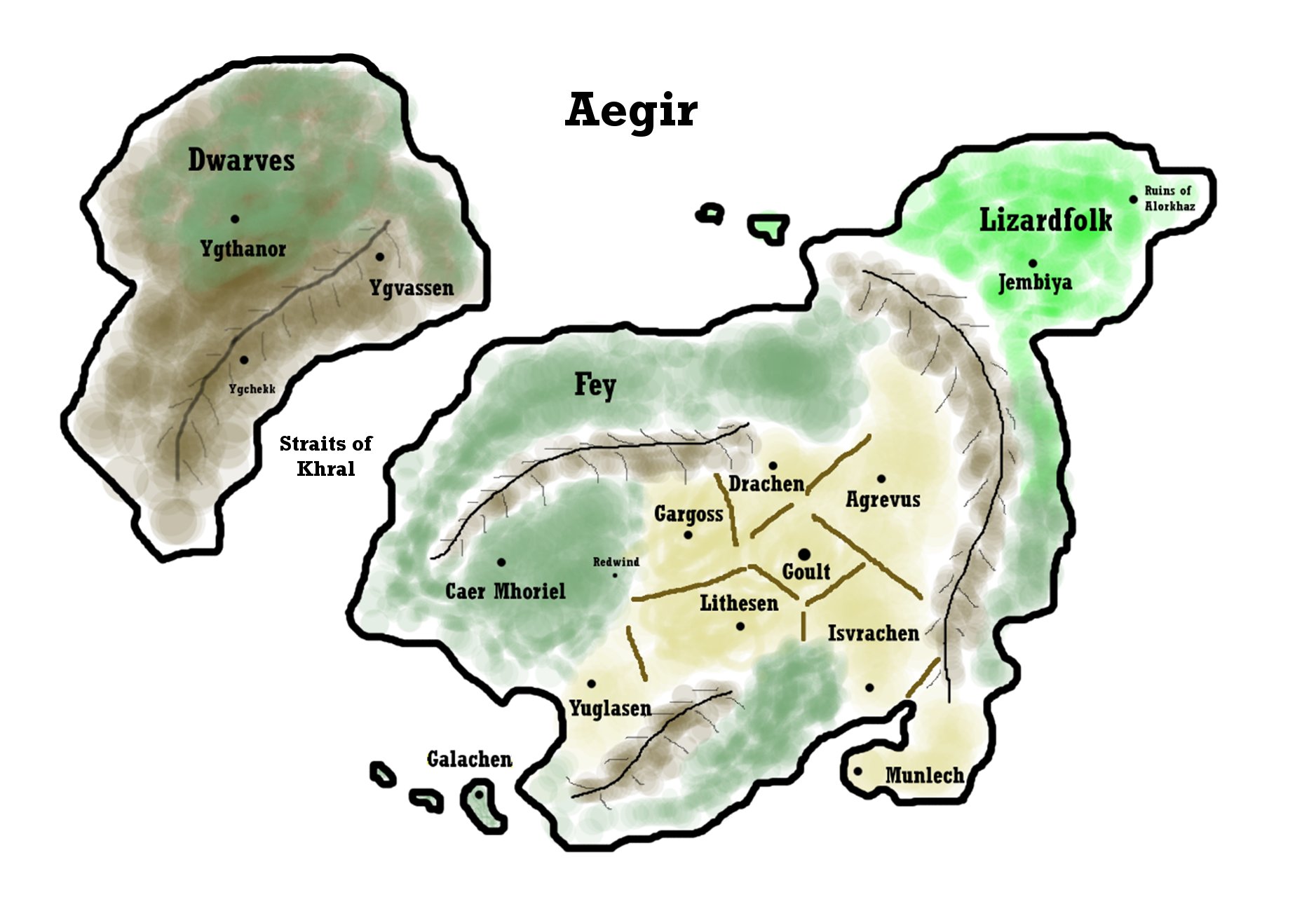 A map of Aegir

The Broken Continent of Aegir (AY-jeer) consists of two large land masses and several small chains of islands. The climate is primarily temperate, similar to that of Western Europe. Aegir is heavily influenced by Norse, Gaelic, Greek, German, and Zoroastrian names and concepts.

Aegir is a hostile land, consisting of several major groups struggling for dominance. Essentially all the civilizations are insular, territorially, and even xenophobic. Inter-racial relations are strained at best. This leaves plenty of opportunities for interesting diplomatic or espionage type adventures, in addition to traditional dungeon-crawl or wilderness areas.

What Aegir is not

Religion in Aegir is at once unified and varied. All peoples share the underlying belief that the gods and goddesses are at constant war in the Spirit Realm, and that the good and evil actions of mortals strengthen the respective factions in that battle. From this point, each race and subculture has its own story, and most have their particular patron deity or immortal to whom they give their devotion.

The full creation story can be found in the history article.

The gods, demigods, angels, and fiends of Aegir all spend most of their time in Threysos, the Spirit Realm (A Plane). Threysos is much like the Ethereal Plane of traditional D&D cosmology: it closely overlaps the material plane and denizens of Threysos can observe and sometimes even interact with the material plane. Threysos is also the site of Sorastraz - the Divine Battle.

Threysos is important to the daily lives of mortals because some events there can "bleed" into the material plane. At times mortals can even reach across the boundary between planes and communicate with immortals - this is how scrying and some other magics work. There are some places where the boundary between worlds is somewhat weak. Here travel between the planes is easier, scrying is more powerful, and strange events are quite common.

Sorastraz is a never-ending battle between the Divine Court and the Pact of Ruin. If one side were ever to win, those gods would gain control over Aegir and the mortals who reside there. In addition, due to the "bleed" effect in Threysos, the battles of the gods often spill over into the mortal realm. The earliest and best example of this is the Sundering, which separated the Eastern and Western Lands with the Straits of Krahl.

Sites of great struggles between the immortals can be found scattered across Aegir. Some are tainted by darkness, while others are sacred and hallowed places - this is mostly dependent on which side was victorious. Sites of powerful clashes sometimes weaken the boundary between Threysos and Aegir, causing "haunted" or highly magical locations.

Sorastraz is a very important icon in most Aegir religions. Its continuing occurrence is clearly undeniable given the bleed-through from Threysos, and it's effect on the fate of mortals makes the Divine Battle of great importance for those of any spiritual inclination. Not only can Sorastraz affect Aegir, the mortals of Aegir can in turn affect Sorastraz. Actions of order and good will strengthen the Divine Court, while actions of chaos and ill will strengthen the Pact of Ruin. In addition, the souls of the dead are bound to fight in this war to pay for any mistakes made in life before passing to their final resting place.

As one might imagine, knowledge of where the next skirmish will be fought is of great use to the people of Aegir. The various societies deal with this in different ways, but usually clerics and holy people commune with their gods or the gods' immortal servants to receive warnings. The location of the skirmishes can also be divined through arcane means, though this is more difficult. In general people fear the violence of the Divine Battle and try to be as far away from the site as possible in case bleed-through occurs, but some religious zealots flock to these locations.

After death, the soul of a mortal is claimed by the god he or she swore fealty to in life. However, if the mortal was not a righteous follower, the soul is not as tightly bound to that god. It can sometimes, in these cases, be stolen away by another immortal, or lost in Threysos or even in the mortal realm. Souls are harvested by either valkyries or reapers.

Bound souls serve their god or goddess in Sorastraz. Weaker souls are generally simply used as a source of power for stronger immortals. Strong souls sometimes manage to retain their form. If bound, these souls become soldiers in their respective armies (known as einherjar), and have the possibility of progressing to angels or fiends. If unbound, these souls become powerful lost spirits such as ghosts or spectres.

The binding of souls is the reason resurrection spells are so difficult in Aegir. Essentially, the person trying to perform a resurrection must first barter for or otherwise obtain permission to use the soul of the person they are trying to resurrect. Lost souls who have become ghosts or other spirits are also difficult to bring back, since they do not possess logical reasoning and can become violent or otherwise emotional. Once a soul is freed from whatever bonds it has, it can be resurrected normally. Souls are a source of power for gods and immortals, and they do not give them up easily.

After souls have served their time in Sorastraz or have fallen in battle, they return to the spiritual stuff of Threysos, to be reborn into new bodies eventually.

The Divine Court is led by Lady of Light and the Lord of the Land. The Court was created to protect the interests of the mortals of Aegir, and the organization as a whole is lawful good in alignment. Not all members of the Court are lawful, however all generally accept the rule of the Lord and Lady.

The Divine Court is not usually worshiped as a whole - most cultures follow their own patron deity, but recognize that that deity is part of the Court. In general, the Lord and Lady are recognized as leaders of the Court by all cultures and while they may not always be worshiped, they are at least given respect.

While the "Divine Court" does refer to the forces of good and law who battle in Sorastraz, the Court also still exists as its original concept: a body before which conflicts between immortals can be brought for judgment. The Lord and Lady preside over the Court as judges, while the other key members of the court act as their advisors. The Court is held at Geyan, an open amphitheater in the Western Lands of Threysos. It is here that strong souls might challenge their sentences or seek to be unbound; where two gods with claim to the same soul may find a solution; and where immortals wronged by one another may seek retribution.

Key Members of the Court[edit]

The Pact of Ruin is an organization of dark gods and immortals, who resented the authority presumed by the Lord and Lady and refused to bow to their Court. The Pact was created by Agshasa Muren, who many believe to be he who broke the great continent in two. As an organization, the Pact is chaotic evil in alignment, though some of it's members may have lawful inclinations.

Like the Divine Court, the Pact of Ruin is not often worshiped as one, and instead specific deities are usually taken as patrons. However, virtually all followers of gods from the Pact preach "ill thoughts, ill words, ill deeds" - these things strengthen the Pact in Sorastraz.

The Pact's original purpose, in addition to refusing the rule of the Court, was to meddle in the affairs of mortals. They continue to pursue this pastime, as it allows them to increase their power while causing trouble for the Court. The Pact thrives on corruption, greed, and any of the darker desires of the mortal soul. To those who pledge themselves to it's designs, it rewards power and pleasure, in return for eternal servitude.

Key Members of the Pact

Please note that these are only the most prominent members of the Pact of Ruin. DMs - feel free to add your own deities to this list or encourage your players to do so.

There are very few gods who are not part of the Court or the Pact. By far the most notable of these is the Red God Mabdig. Mabdig is the god of halflings and goblins, as well as thievery, cunning, and trade. Mabdig has his own agenda, and sometimes assists whichever side of the Divine Conflict best suits his needs at the time.