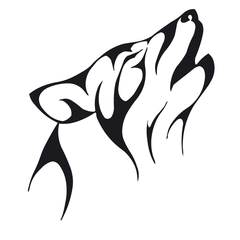 The holy symbol of Aruman.

Aruman the Wolf began his existence as a simple wolf. He was one of the first of his kind, and walked the world of Aegir before the fey calmed the fierce beasts. During this time, he came across a strange, green, two-legged being sitting in the woods, and attacked it. The being simply smiled and allowed the wolf to mindlessly attack him. Try as he might, Aruman's ferocious bites and slashes didn't seem to have any effect against this strange creature. When the wolf had tired himself considerably, the creature stood. It placed a hand on the wolf's head and made some strange, melodic sounds. The sounds settled over the wolf, and he suddenly understood them to be words. The Lord of the Land had conferred upon him the ability to understand speech, and to speak in return.

After that, Aruman devoted his life to serving and protecting his Lord. His name, in sylvan, simply means "Wolf". As the centuries passed, Aruman grew in size, and slowly transformed due to his long association with his god. He developed the ability to shift his shape between that of a wolf, half-wolf, and man, and was the first natural lycanthrope. While he is usually most comfortable in wolf form, he often is depicted in half-wolf, half-humanoid form.

When Sorastraz began, Aruman insisted on leading the Court's warriors in battle. He has done so ever since, taking his place in the pantheon as a great god of war.

Aruman beseeches his followers to defend and protect those who cannot protect themselves. He teaches that to die in battle fighting for what you believe in is the greatest honor you can achieve. Those followers who die in such a way often find their way into his armies in the afterlife.

As the god of war and protection, Aruman is worshiped by many warriors. Even if they don't regularly worship him, many warriors will say a quick prayer to Aruman on the eve of battle. In addition to warriors, anyone in need of protection might pray to Aruman to send them help.

The clergy of Aruman are warrior priests. Often they might be veterans of many battles who cannot live as warriors any longer. His priests run schools of the fighting arts, training bodyguards and soldiers. Priests of Aruman raised in such a fashion are considered the best bodyguards available, and they will lay down their lives for their charges, assured of their place in the Divine Battle after their mortal deaths.

There are no temples to Aruman. Instead, the schools where his warrior priests are trained contain monasteries. Warriors may also have small shrines to Aruman in their houses.