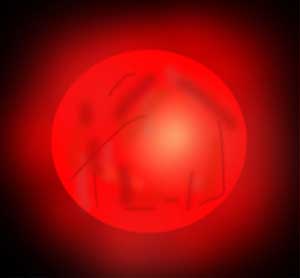 The holy symbol of the Red God Mabdig

The Red God Mabdig is a very mysterious god. In addition to being the creator of both goblins and halflings on Aegir, The Red God is known far and wide as the patron of thieves and tricksters, the traveler, and a god of luck. He is the only prominent god on Aegir to ally himself with neither the Pact of Ruin nor the Divine Court. He might occasionally help one side or the other if it serves his purposes, but for the most part he stays out of the conflict altogether.

The Red God created goblins in hopes of an industrious race that would rival the humans and take of Aegir with their pure numbers. However, the goblins have always been a great disappointment to him, being simple and irrational creatures more prone to in-fighting than world domination. Because of this, he created the halflings, the youngest of the peoples of Aegir. He made halflings cunning and charismatics in all the ways that goblins were not. To this day, some beleive that halflings are carrying out their mysterious god's wishes and will someday rule the world, though the halflings themselves deny it.

Mabdig is usually depicted as a humanoid figure covered in voluminous red robes, a cowl hiding his face. His hands are outstretched, one holding a red orb, the other a dagger.

While Mabdig is the patron of thieves, he is also the god of diplomacy, and his dogma reflects this:

Followers of the Red God can come from all races and walks of life. Surprisingly, many goblins do not follow Mabdig, and instead worship local nature spirits, though some do acknowledge their creator. Halflings are almost all followers of the Red God, and indeed make up most of his clergy. Thieves and scoundrels of all types give a nod to the patron of theives, as do travelers and knowledge-seekers.

The clergy of the Red God Mabdig is made up almost entirely of halflings. The clergy is very close-mouthed and mysterious, and some people theorize that a secret society of halfling advisers and arbitrators take their orders from these priests.

Temples to Mabdig are scattered throughout Goult and a few other civilized areas (excepting the dwarven lands - the clergy of Thalysis and the Red God don't get along). They are, for the most part, modest affairs, where people come to hear sermons and stories about Mabdig.

Religious ceremonies mostly include sermons, but often at the end of a service, a formal storytelling session ensues. Travelers are called upon to share their experiences with the faithful. Bards are in particularly high demand at these gatherings. Sometimes the entire constituency travels en mass to a tavern after these sessions for wine, merrymaking, and more storytelling.