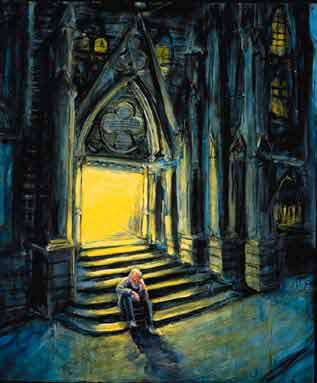 A church dedicated to Alfus. It resembles a library on the inside and many of it's clergy are also historians.

Not everyone is religious in Tyrus, though most acknowledge the existence of these gods and goddesses. In Tyrus there are a wide range of religious levels, ranging from completely atheist, to downright fanatic.

Planes in the World of Tyrus setting are the standard planes of D&D. The gods from the standard books (Pelor, Lolth, Hextor, etc.) exist on their home planes, but do not link to the Material Plane and corresponding planes of Tyrus. Beings from other Material Planes may not traverse to the Material Plane of Tyrus, and vice versa. Beings may, however, meet beings from other Material Planes in the Outer and Inner Planes, though they cannot travel with each other to the same Material Plane or any corresponding plane (Astral, Shadow, etc.) of that world. Because of this, gods from different dimensions have met in the planes to converse and chat on worldly matters. Some are even considered friends.

These gods and goddesses rule over all aspects of will and mind. They are above the other gods, and generally are not worshipped specifically. All deities are under the domain of Claud, the God of Balance. He is the God of the Gods, if you will. Clerics usually worship a Life Deity created by a High Deity, instead of directly serving a High Deity.

These gods and goddesses rule over the world and its aspects, such as the elements. The Low Deities are rarely worshipped specifically and clerics usually do not choose to serve them, but instead will serve a Life Deity who was created by one of these Low Deities.

Deities of Life are more specific. They are the patron gods of things dealing with what happens in life on the world of Tyrus. These gods and goddesses are created by the High and Low Deities. Most of them also serve one of the Greater Deities. It is common for a Life Deity to serve the deity that created him or her.

God of War and Battle

God of Forests, Plants, and Woodlands

God of Heat, Deserts, and Drought

Goddess of Agriculture, Food, and Fertility

God of Light, Healing, the Sun, and Family

God of Darkness, Pain, the Moon, and Rivalry.

Goddess of Passion, Love, and Friendship

Goddess of Weather and the Seasons

God of Thieves, Pirates, and Mercenaries

God of Travel, Trade, and Diplomacy

Goddess of the Sky and Stars

God of Time, Memory, and Knowledge

Goddess of Creation, Crafting, and Beauty

God of Secrets, Trickery, and Stealth