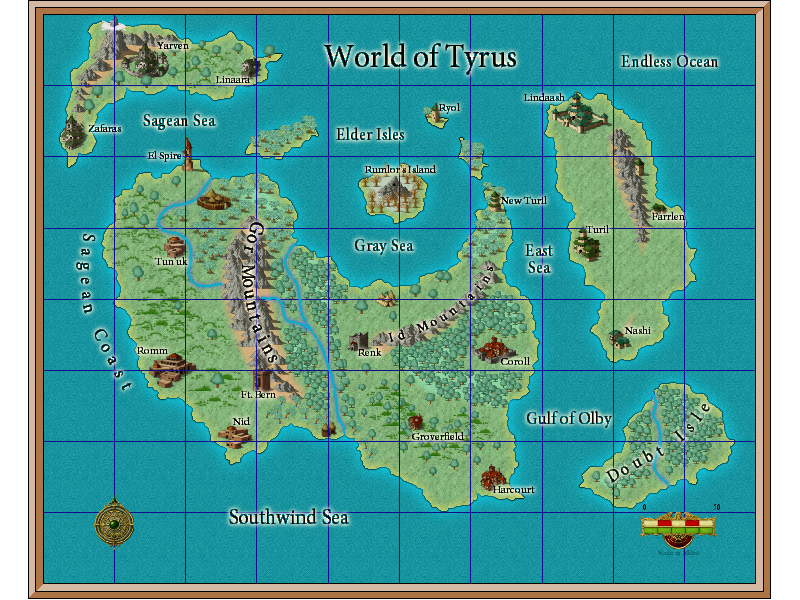 The known world of Tyrus.

The known world of Tyrus, what is depicted on the world map, is widely considered to be the only large masses of land on the world. Tyrus is a very small planet, only estimated to have a circumference of only 700 miles. It is common knowledge that Tyrus is spherical, but expeditions out onto the ocean have turned up nothing than the occasional rumor of a small island at sea, or some other insignificant piece of information. As far as the people of Tyrus know, most of the uncharted world is water.

Voyages to the north past Eriv have failed. The waves become so fierce, the wind so strong, and the air so cold that no normal group of adventurers could ever make it more than 100 miles north of Eriv. Voyages south face the same fate about 150 miles south of Jessiah. Trips to the east and west have had to turn back towards their homelands because they had reached their half-way points on supplies. They could go on and risk not finding any land, or turn back and return to their families. The sailors always chose the latter. Well, at least the ones who returned home. No one knows the fates of expeditions lost at sea.

At the core of Tyrus are the two conjoined continents, Jessiah and Sagea. They are separated by the Odani River. To the east of the Odani lies Jessiah. The Republic of Ramalda covers most of the continent, but the northern section of the continent is always disputed between the Lokken Empire, third party groups, and Ramalda.

To the west of the Odani River is Sagea. Though the valley is sometimes considered part of Jessiah, since it lies to the east of the difficult Gor Mountains and is hard to access by the beings on the Sagea continent. Most of Sagea is under the Empire of Kor, but a small section of the northeast is under control by the Boruk-Vo Centaur Tribe.

Eriv is the the continent-island that lies to the north of Sagea and in the northwestern section of the known world of Tyrus. It is entirely under the fair domain of the United Land of Eriv, and almost completely populated by Elves.

Lokk is located on the eastern part of the known world of Tyrus. It is entirely under the domain of the United Lokken Empire. The west side of Lokk borders the East Sea, which provides a space between Jessiah and Lokk.

The Elder Isles comprise a large chunk of the northern section of Tyrus, resting on the border of northern Jessiah and some of northern Sagea.. There are hundreds of islands, but only three large ones. The Yunai Peninsula is considered a part of the Elder Isles.

In the center of the Gray Sea, surrounded by the Elder Isles, lies Rumlor's island. This ghostly island is almost never ventured to, mostly because of the legends told about its inhabitant, Rumlor the Savage. Rumlor is supposedly a Black Dragon that once laid waste to much of the Elder Isles, and his island still bears that scarring. The mountain that exists in the center of the island is said to contain his lair.

No one is quite sure of what the Doubt Isle contains. The island is split in two by the Linodor River. It has a forest that is so dense, it is almost completely dark inside the forest only about one mile in. Rumors are told of a tribe of blind minotaurs who live on the western section of the island, deep within the forest, but no adventurers have returned from expeditions into the middle of the island. The eastern section is even more unknown that the western section. What lies inside is completely unknown, but the things inside are surely not friendly.

The world of Tyrus is mostly covered with water. Water forms the barriers that keep the known world to what it is described to be today.

The body of water that surrounds the known world of Tyrus is called the Endless Ocean. To the north and south it becomes too cold for travel. To the east and west it seems to never end, and expedition that far is an almost certain suicide.

The Southwind sea is mostly calm, and covers the southern borders of Jessiah and Sagea. It is considered to go out 100 miles to the south, where it then becomes colder and is known to be a part of the Endless Ocean.

The slightly greenish waters north of Sagea and south of Eriv are known as the Sagean Sea. It serves as the divider of Eriv and Sagea, and it is mostly calm.

The Gray Sea exists within the Elder Isles and is usually a bland blue, making it appear to be gray sometimes. It is a spastic body of water, changing from calm to rough seas in times as short as a half hour.

The body of water that divides Jessiah and Lokk is the East Sea. It is known to be rather rough, which aids in the natural defense of the Ramaldan coast. Sea attacks on Ramaldan settlements are almost unknown.

Drawing from te roughness of the East Sea, the Gulf of Olby is dangerous to traverse. It exists between Jessiah, Lokk, and Doubt Isle.