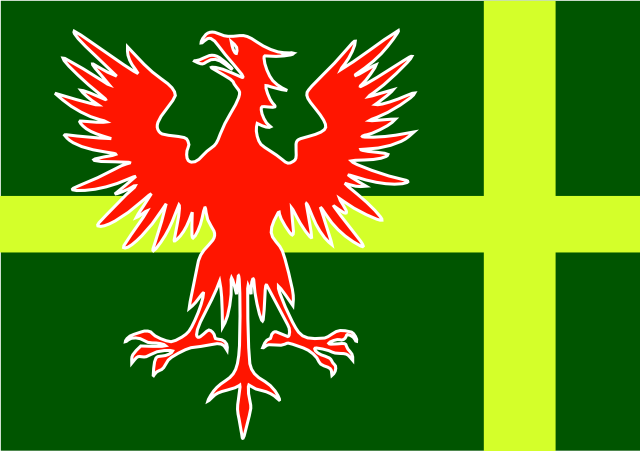 Flag of the Phoenix Empire.

Glittering Vale was once among the most beautiful worlds in all the Endhavens. She was the home plane of the Empire of the Magi. This was the homeland of the Elves. Glittering Vale later became a prize of the Phoenix Emperors, who set her aside as one of the three great natural conservancies. During the Wars of Law and Chaos, the great god Nomos was defeated here by the Fell gods in the Battle of Glittering Vale, with that dreadful battle forever ruining this world.

The plane is now a shattered corpse of its former glory. Everything is dead but weeds and vermin. The land is colder than it should be. Ruins dot the landscapes, its inhabitants long dead form the great battle. Few visit here, other than adventurers seeking food or knowledge. The elves who once lived here have spread into a myriad of tribes.

The Glittering Vale appears in many stories of antiquity. It is here that the Empire of the Magi ensnared the world in their machinations. From their capital of Chromata, the elves sent forth learned wizards to advise and inform rulers around the world. In truth, they beguiled the rulers. Slowly and methodically, the Magi extended their power across all the land. They invented the gate. Chromata contained so many gates that it became called the "city of gates."

The Crusade of Light brought this empire to an end. The elven wizards were assassinated, assaulted, or captured early in the war. Those that survived soon lead great armies against wizards far more trained in the arts of death and mayhem than they were. Many great elves wizards fell in battle. Glittering Vale, greatly weakened, invited many great and wise men to its capital. There, they formed the Golden Circle, and lead the forces of good to regain the world. Exhausted and bankrupt, they lost control of their holdings, issuing the Imperial Age upon the world.

During the age of Empires, with so many losses behind them, the Magi of Glittering Vale adopted an isolationist policies. They did their best to stay neutral in all the conflicts. They would keep themselves from the world. For though they were weak, none held the magic to conquer them. Unexpectedly, Thule himself rode to them, asking them to be in his empire. They consented.

During the Wars of Law and Chaos, the Vale sided with Law while all around them stood with Chaos. The Magi payed dearly for this allegiance. Nomos himself defended this realm against the entire Schandernan pantheon. This battle devastated the entire Vale, killed most of the Schandernan gods, and killed Nomos himself. The Battle of Glittering Vale left this land a dead realm of suffering and misery.

This land is now dominated by the pitiful decedents of its former inhabitants.

Little lives here. What does live here is twisted and unnatural. The once green vales are now fields of gravel and dust. The streams and rivers flow putrid, muddy water. Slimes and oozes abound. Vermin of all types are common. The few elves that still live here scrape out a meager existence.

There are innumerable gates and landing points on this plane. In ages gone by, this plane was a nexus of civilization. It was the Empire of the Magi that invented the gate. Her capital, Chromata, was once called "City of Gates".

The climate is bitter cold with moderate winds. The climate rarely changes, except for the occasional electrical storm.

There is little left on this world of flora or fauna. Only in rare pockets do anything grow, and these areas grow fungi.

The elves are gone. Those that survived left in the Elven Diaspora. The people that live here now are wretched an primitive, little understanding the great land that they live in. They live in tribal bands, forever fighting over the meager resources.

Chromata was once a beautiful garden city, second to none anywhere in any plane. Now, she is a twisted and shattered wreck of her former beauty. For those intrepid enough to journey here, she still contains many secrets, and much magic.