Duat is located on the northeastern border of the Mists. The Alabastrian Empire, which lies to the south, is its only civilized neighbor. The Nereid Sea and the Dead March make up its western border.

Duat consists of the Dead March's foothills and swamps where powerful and fearful creatures frequent. Its land around the Nereid Sea is mountainous temperate forests with coastal towns. Inland it is a land of arctic tundra or is hilly and rocky. Only around the southern reaches do fertile verdant fields make up the landscape. The rivers flow through large lakes only to get caught in the Dead March or into the Nereid Sea. The northern reaches reach very low temperatures and snow drifts make up the landscape in winter. Only for a few months can the northern reaches be farmed. Here people mostly hunt to survive and cut down trees in the summer months to stay alive throughout the winter. The mountains around the Nereid Sea make inland trade more difficult, however the rivers help. This mountainous region has been most useful in wars to protect their borders. The snow falls all the way south to past the mountains in winter, and only in the surrounding low lying areas is more extensive farming possible in the summer months. The Shinigami patrons of Duat ordered the use of wights to perform the menial labor needed to produce the food the ghilan need to survive. Even with landbonds this land is difficult to farm.

Duat has no formal governance. The ghilan are divided into various tribes, usually named after various scavengers and predators that supervise their wight servants and raid other tribes and the Alabastrian Empire for other material needs. There are a handful of port cities that supply ships and trade but their primary purpose is to provide a launching point for ghilan raiding parties to ply the Nereid Sea as pirates and raiders, plundering all of the Free Kingdoms that border these waters. Nominally, the chieftains of the ghilan tribes have pledged their support to the Shinigami patrons, but they have been utterly silent for many centuries. 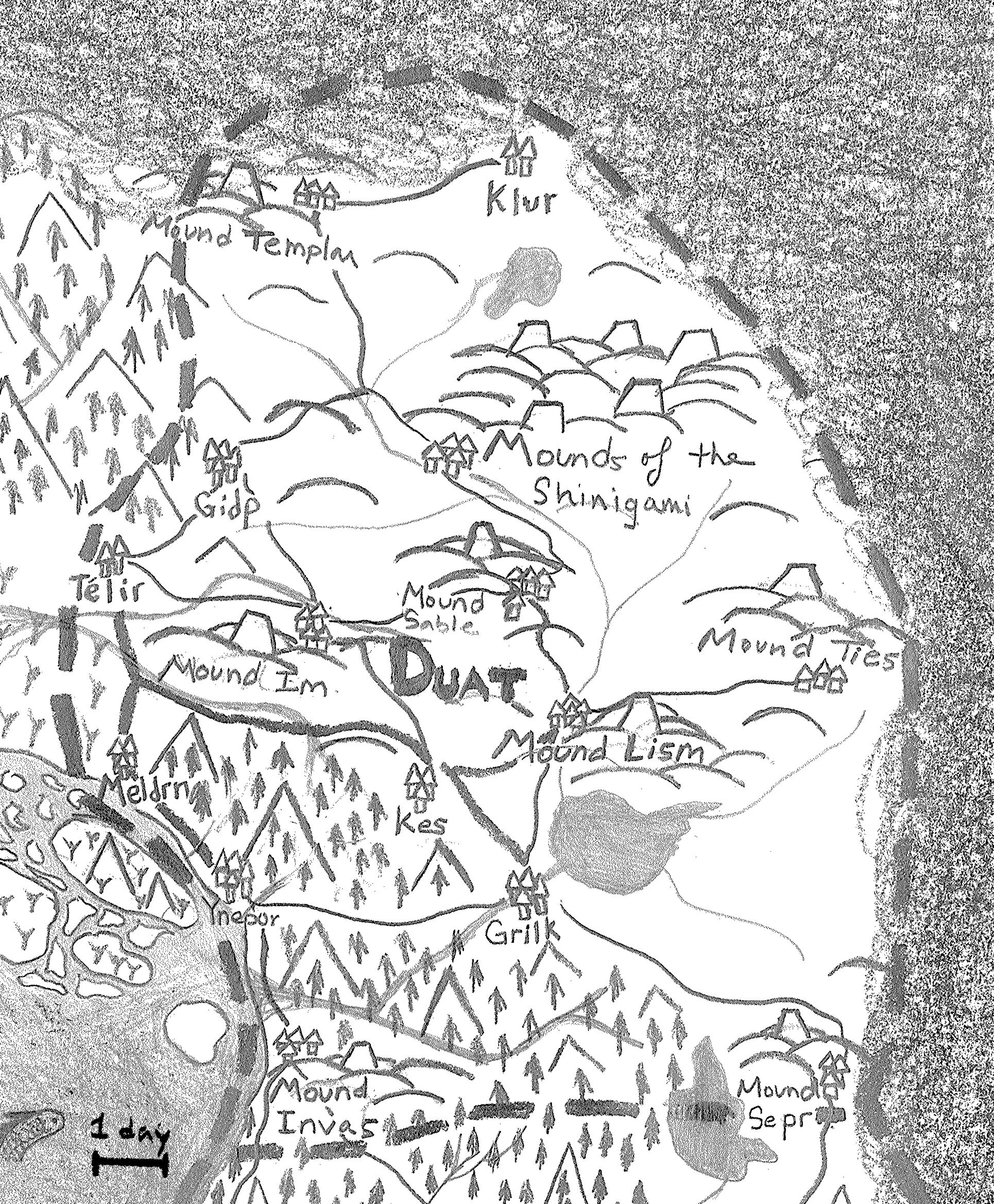 Duat. The map's scale is based on the average medium race's walking speed.

Duat is a culture based on the frequent use of necromancy. Captives in war are slain and turned into zombies or skeletons to perform the backbreaking menial labor needed to be able to farm the hard lands of Duat. Undead are used in every aspect of life, from farming, mining, to even basic crafts. This frees the ghilan to more noble pursuits, such as waging war and plunder. The ghilan society places a high value on honor and a low value on life. They believe their Shinigami patrons dwell deep beneath the earth, where the Mists seep forth, and that they are sustained by the blood of their enemies as it seeps into the ground.

The history of Duat is one of never-ending warfare amongst the ghilan tribes. Even when the Shinigami were active in the world, the ghilan were encouraged to fight and spill blood in ritualistic combat and outright warfare.

When the humans first founded Dragonseye, it was a ghilan named Nebu who brought Duat's warfare across the Nereid Sea and into the Dragonslands. After Nebu refused the Shinigami's orders to return to Duat, the Shiniagmi began to interact directly with the ghilan less and less frequently. At first, the Shinigami only interacted with chieftains and necromancers. It was during this time that the Shinigami made a treaty with the human King Philip of the Eastern Kingdom against the Avatars, only to betray Philip to those Avatars. Many speculate that the Shinigami and the Avatars had always planned that alliance and subsequent betrayal.

The Shinigami then continued as things had always been, barely cognizant of the world beyond Duat, and turning a blind eye to the steady trickle of disaffected ghilan who had been migrating across the Nereid Sea beyond the reach of the Patrons.

Six centuries after their betrayal of King Philip, the Shinigami assign a young necromancer named Efthal to advise a young and relatively unimportant chieftain named Margor. Under Efthal's guidance, Margor increases the size of his army, and wins battle after battle against his fellow ghilan. Ten years after Margor and Efthal's partnership, the pair attack the Alabastrian city of Ynepor along the Duatan border, sacking the city, and desecrating its temple. The Shiniagmi did not authorize this attack, and they ask Margor and Efthal to attend them at one of the sacred Mounds. Instead, Margor and Efthal build a fleet of ships and occupy an island off the coast of Duat. From there, they begin a campaign of piracy against settlements along the Nereid Sea, both in and out of Duat. All attempts by the Shinigami and others to apprehend Efthal and Margor were in vain.

Thirty years later, Margor and Efthal raid the Alabastrian Empire again. This time, however, they take a horde of ghilan and wights deep into the Empire and sack the capital Aligon. Again, they desecrate its temple. However, when they finally return with their booty to Ynepor they are met by a cast army of wights, ghilan, and, it is said, three Shinigami. In the battle Margor is slain and the ghilan and wights scattered, but Efthal manages to flee. The next year, Efthal stands on top of a Sacred Mound and, in front of a legion of Shinigami, demands that the Shinigami afford him entrance. Nothing happens. Efthal is neither allowed within, nor is he destroyed for his insolence. Eventually, the crowd scatters and Efthal leaves.

Nothing is heard from Efthal for several decades, under he appears in the Second Empire, and becomes one of the most infamous men ever to walk upon the world. But his story in Duat is done. 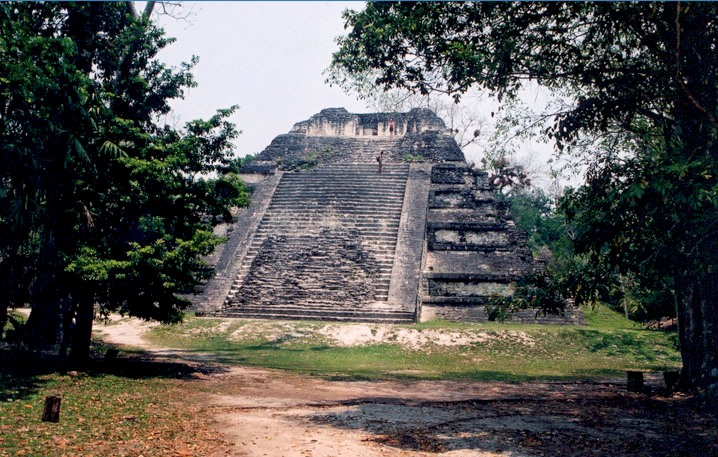 The Mounds of the Shinigami are in various states of disrepair, but are still a source of veneration amongst those who live in Duat.

It is also at this point that the Shinigami retreat from the world. They leave the tribes ungoverned and unmanaged. The necromancers and chieftains must make their own plans and their own decisions. While some ghilan war chiefs cling to the old ways, without the shinigami, many feel no need to war against their fellow ghilan. Rather, they become pirates and raiders, sacking the Alabastrian Empire, or the coastal towns along the Nereid Sea.

Some ghilan attempt to unify Duat with ghilans ruling instead of Shinigami. More than 400 years after the Shinigami retreat to their Mounds, the warlord Harald briefly founded the Northern Reach. At around the same time, the warlord Otto unifies southern Duat against Alabastrian incursion in an area to be known as the Border Kingdom. Neither of these realms lasts long without a charismatic warlord to guide them.

Over the centuries, many other warlords and warladies attempt to unify Duat, with some success, but never lasting success.

Over 50 years ago, Warlady Margreth defeated the two largest tribes in Duat to re-found the Northern Reach. Until recently, she governed this area, as a genuinely respected leader, almost in the mold of the monarchs of the Free Kingdoms. Twelve years ago, she marched an army into the Mound at the center of her holdings. She returned declaring the Mounds to be empty. She announced herself to be the new Shinigami overlord of Duat and built a massive castle atop the mound. The castle lasted one year. Then, say survivors, the Mound came alive and swallowed the massive castle, including Margreth, her entire family and the bulk of her forces. Since that day, the Mounds of Duat have hummed with an eerie noise.

At the same time, in the south, the land once known as the Border Kingdom was dominated by seven chieftains who split their time fighting one another and the Alabastrian Empire. When the Mounds cam alive, the seven chieftains agreed to a truce and made a pilgrimage to a Mound in order to seek the advice of the Patrons, if they indeed had returned. Nobody knows what occurred in the Mound, but only three warlords returned. It is said they were drastically changed by the experience. They would not state what happened, except to say that they now serve the Shinigami, and that soon all Duat will be unified once more. That three, once bitter rivals, now act like brothers, working together to unite the ghilan and wights under the Banner of the Mound. Despite their efforts, the Shinigami have not yet physically returned (although some people claim to have seen visions of them during near-death experiences and have been granted amazing arcane powers thereby).