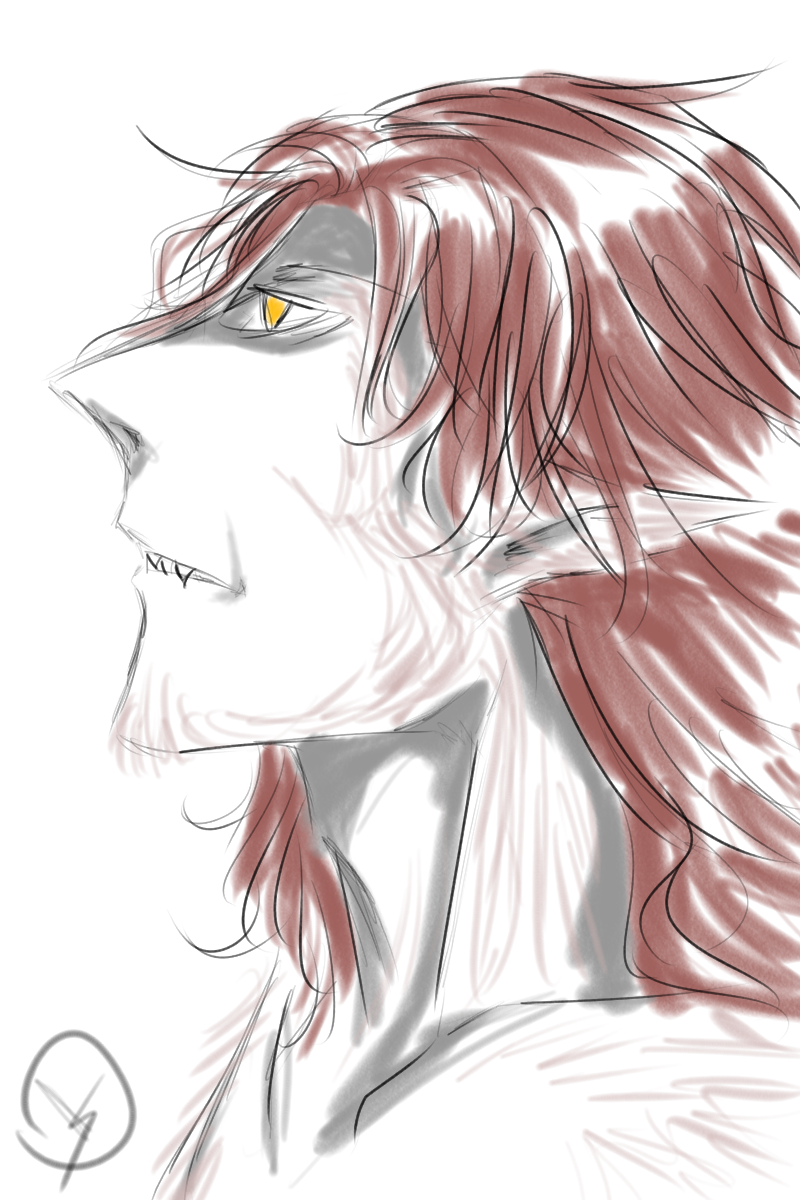 Wulpir are beautiful humanoids, if you can ignore their wolfish features. Their bodies are typically well-muscled and lean. Like a vryloka, their skin is uniformly pale, with only hints of color like pink on their chalky complexion. Their eyes are usually either gold or blue, and turn a hellish shade of red when they feel intense emotions. Like shifters, they have features that are naturally bestial. Their canines are sharp, but other teeth can be jagged also, and their faces are angled in a distinctly lupine way. Most notably bestial is the light fuzz on their skin, which is actually fur. Males are much hairier. Their ears are also pointed. Most wulpirs have hair that is a mix of murky strawberry red and grey, though some have simple brown hair.

A Bond Forged In Blood[edit]

This race is rumored to be the fruition of forbidden myth: a vampire werewolf. While the truth is much more complex, the truth is not so far from legend. Wulpirs originate from a group of shifters, lycan-touched descendants, who had sworn allegiance to a powerful vryloka. In the vryloka's battles against his enemies, the shifters offered themselves to their master as bloodbond candidates to get stronger. Thus, they were consensually subjected to the blood bond ritual by their master, which turned them partially into vryloka. However, due to their bloodline, the transformation was incomplete and left them able to reproduce. After the defeat of their master, they supposedly vanished. However, their blood came to proliferate through the world. When people began to notice the appearance of this horrific race, it was too late.

Wulpirs are careful to conceal their presence in society due to the perception of their bloodline. They are evil compounded, people would say, having blood of beast and undead. Due to their mixed natures, they find trouble passing as easily as a vryloka, and thus usually conceal themselves with obscuring clothing. Their race is scattered in remote groups off the beaten path. Covens of wulpirs consist of usually six or less members, and they are nomadic. They travel for the sake of safety and often feel kinship only among their own, who they see as bloodkin. An exception is possibly the tiefling race, who share the same cursed fates.

Due to how people tend to regard them with fear and revulsion, many wulpir develop equally misanthropic tendencies for other races. Some see their heritage as power to be proud of, and all are correct to fear it for their might. Others are more humble, and resent their ancestors for this curse lain upon them. Wulpirs tend to be very grim and stoic, though rage makes them fearsome. They are also suspicious of kind acts, as many have been on the receiving end of false pity. If they find themselves opening up, they try to repress it. Once they form a close bond with someone as an ally, they are fierce friends forever. There is a long way between however, due to their constant suspicion of betrayal.

Wulpir names have a family component like that of the vryloka. Their main names tend to be aristocratic and elegant. However, there is an element of the wild left in them from their weretouched ancestry.

Descendants of shifters touched by a vampiric ritual
Ability Score Increase. Your Charisma score increases by 2, and your Dexterity score increases by 1.
Age. As the ritual does for its subjects, wulpirs are incredibly long-lived compared to a shifter. However their life spans rarely go much farther beyond three hundred years.
Alignment. While possibly chaotic due to their instincts, wulpir are equally loyal to those of their own, being almost intrinsically lawful for other wulpir.
Size. Wulpir range from 5 to almost 7 feet tall. Your size is Medium.
Speed. You have a walking speed of 35 feet.
Darkvision. You can see in dim light within 60 feet of you as if it were bright light, and in darkness as if it were dim light. You can't discern color in darkness, only shades of gray.
Keen Sense. The primitive sense of your ancestors remains to help you survive. You are proficient in the Perception skill. You also have advantage in Wisdom (Survival) checks to track creatures with hit points below their maximum that bleed.
Weakened Shift. While no longer able to shift to the degree of your heritage, you instead gained some regenerative capacity as a result of the blood bond. As a bonus action, you can provide a rush of vitality through your body. You gain temporary hit points equal to your level + your Constitution modifier or your Charisma modifier (minimum of 1 temporary hit point). Once you use this trait, you can’t do so again until you finish a short or long rest.
Necrotic Resistance. Thanks to the undead nature of the ritual, you are resistant to necrotic damage.
Languages. You can speak, read and write in Common and one other language of your choice.